Latina Lista: News from the Latinx perspective > Columns & Features > Global Views > Uruguay: More than half of inmates study or work

Uruguay: More than half of inmates study or work 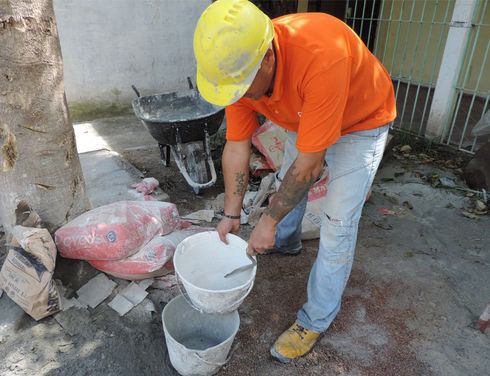 Since 2010, the country’s rehabilitation system has been based on work, study, culture, sports and recreation.

MONTEVIDEO, Uruguay – As soon as he started his four-year prison term in July 2012 for armed robbery, Andrés Palomino knew he didn’t want to be a career criminal.

“I worked my entire life, since I was 15, and I know that this crime was a result of cocaine addiction. That isn’t me,” said Palomino, 32, whose main motivation is his wife and two children. “The first thing I did was get a job, behave myself and maintain a good relationship with the police and the prison staff.”

He volunteered for one of the prison’s worst tasks: rebuilding the fourth module of the Penal de Libertad Prison – Uruguay’s maximum security prison – that was destroyed during an April 2002 riot. The 17 prisoners who started the work had to endure attacks and even death threats from other inmates.

“Building jails made you a friend of the police and that’s something you pay for with your life,” Palomino said.

After 15 days of torment, inmates’ perception of the 17 volunteers started changing. Eighteen months later, close to 300 inmates are involved in the rebuilding, with hundreds of prisoners on a waiting list to join the project.

Palomino is among of the nearly 5,000 inmates out of a total of 9,700 prisoners nationwide who are working or taking courses. In some prisons, the working and course enrollment rate reaches 100%.

This achievement stems from the 2010 creation of the National Rehabilitation Institute (INR), which took over the prison system in conjunction with the Prisoners Board of Trustees. Since then, the purpose of the prisons went from security to rehabilitation, INR Director Luis Mendoza said.

Rehabilitation is measured in relation to work, study, culture, sports and recreation. Also, the pathway to release is based on a progression: As prisoners improve, they’re transferred to prisons with less security until earning their freedom.

Today, there’s a ratio of 85% police to 15% prison staff workers in prisons, though some correctional facilities have an entire staff of prison workers. The goal is to reach 100% of civilian staff inside prisons, leaving police officers in charge of perimeter security.

“Police officers are trained for repression, not rehabilitation,” Mendoza said. “Since 2010, recruitment of police for prisons has ended. Now, only civilians are hired, as workers are recruited through public advertising.”

The results include savings

The work of prison inmates has translated into savings for the Interior Ministry.

A private company had budgeted US$3.5 million for the construction of the fourth module of the Penal de Libertad Prison, which was slated to house 246 prisoners. But inmates completed it for US$500,000 and increased its capacity to more than 446, Jaime Saavedra, the administrative deputy director of the INR, said.

“And the prisoners show good behavior, which has an impact on their families,” Saavedra said. “The mood is different and they have better visits with their children. It’s much more humane.”

Inmates also learn a trade they can use upon release.

“We don’t feel as if we are prisoners working for these people. For us, this is a company and we are happy to show up,” said Palomino, adding that developing good habits like rising early and working within a schedule will benefit him in the future. “And the days pass more quickly.”

Currently, about 19 inmates are building the Released Inmate’s Home, a place for homeless, former prisoners to live when they are released. It will have a capacity for 50 men and 12 women, and will provide support and employment advice.

Education is another key element of rehabilitation. In 2013, about 5,000 inmates completed an educational course of some type, José Lucas, INR’s education and culture coordinator, said. Carpentry, masonry, food service, health care and drum making are some of the skills they can learn.

But the inmates don’t learn only skills. Thanks to various agreements with public institutions, they can complete primary and high school courses. A total of 500 teachers teach inmates in Uruguay.

The Penal de Libertad prison went from having 15 inmates enrolled in a course to more than 700 today. Additionally, two prisoners are pursuing a university degree – one in psychology and one in veterinary science.

“The important thing is there are more courses, more people getting involved and more interest from inmates,” Lucas said. “People feel as though they’ve accomplished something when they receive a certificate for completing a course.”
Do you like this article?

Featured Photo: Andrés Palomino is among the nearly 5,000 inmates who are working or taking courses out of a total of 9,700 prisoners in Uruguay. In some prisons, the working and course enrollment rate reaches 100%. (Antonio Larronda for Infosurhoy.com)