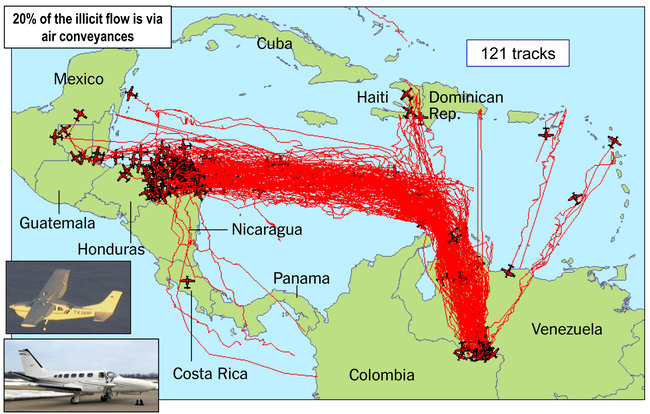 A former top anti-drugs official in Venezuela has lambasted corruption in the country and branded it the “number one” drug trafficking nation in Latin America, highlighting how deeply the connections between organized crime and state institutions now run.

Speaking to El Universal, ex-President of the National Anti-drugs Commission Bayardo Ramirez criticized the lack of a clear policy to rid the country of trafficking, which he said was deeply ingrained into certain corrupt sectors of the government.
Highlighting impunity surrounding the flow of drugs into the country from Bolivia, Ecuador and Colombia, and out towards Central America, the Caribbean and Africa, Ramirez declared that only regime change could effectively address the problem.

The assertions come on the same day El Nacional published an interview with the Hernan Matute, director of the Free Chair on Anti-Drugs Matters (CLIAD), in which he branded the country “the most corrupt” in Latin America and questioned how the country’s National Bolivarian Guard (GNB) could be left in charge of the investigation into the 1.3 ton consignment of cocaine recently uncovered in France, for which GNB officers have already been arrested.

Accusations of endemic corruption and deep official involvement in drug trafficking in Venezuela are unsurprising. As a departure point for drugs destined for both the United States and Europe, corruption permeates the security forces up to the highest levels. The so-called “Cartel of the Suns” (Cartel de los Soles) is the collective name attached to the various corrupt cells within the security forces that facilitate the flow of contraband through the country’s borders, ports and airports, and likely had a hand in the Air France flight. The fact the flight departed from an airport under strict GNB control only emphasizes the degree to which drug trafficking complicity is embedded in security forces and the decision to allow the GNB to oversee the investigation seems at best misguided, at worst corrupt.

Drugs are not the only illicit interest of corrupt Venezuelan officials. Contraband smuggling is rife in the border regions, especially fuel smuggling. Cheap, subsidized fuel crosses the border into Colombia, or is dispatched in ships destined for Central America, and this illegal trade is also reliant on the complicity of officials.