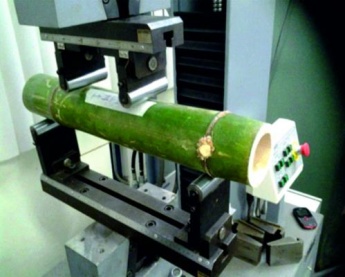 With funding from the Ministry of Science, Technology and Innovation, students and educators at Venezuela’s Simon Bolivar University (USB) are undertaking research into improving the durability and lifespan of bamboo, along with conducting studies into possible uses of the material in housing construction.

Initial tests have already been carried out on experimental, reinforced bamboo developed at the university, according to a press release from the government’s National Foundation for Science and Technology (Fonacit). The foundation is supporting the study.

Lira explained that the experimental bamboo has been strengthened with polymers mixed with ceramic powders. According to the professor, the reinforcing mixture succeeded in “plugging holes made by pests” and improved the uniformity of the material.

In a second phase of the study, researchers hope to construct a prototype apartment block with the reinforced bamboo. According to Lira, the modified bamboo is intended for future use as a “structural element for green, affordable housing”.

A mission to provide affordable housing to the country’s poor was launched by former president Hugo Chavez, has been continued under his successor, President Nicolas Maduro. By the end of last year, over 500,000 homes had been constructed since mid 2011 under the housing mission, according to the government. The Maduro administration has committed to constructing three million new homes by 2019. Although current construction figures are behind schedule, the government has pledged to speed up building.

Lira argued that bamboo is a logical choice for construction material in South America.

“Venezuela , Brazil and Colombia are countries with high production potential for… bamboo…adapted for construction,” Lira stated.

“In these countries, it’s estimated that there are 11 million hectares of bamboo,” the professor said.

The USB is sourcing its bamboo from 200 growers in Aragua state.

Bamboo is one of the fastest growing plants in the world. It can reportedly grow as much as 250cm in 24 hours, depending on climate and soil conditions. Lira also argued that bamboo is cheaper than other construction materials, strong and environmentally friendly.

However, the professor indicated that more research should be undertaken, particularly to reduce bamboo’s susceptibility to insects.

“Technically, we know little about bamboo [construction],” Lira stated, though the plant has been used in buildings for centuries.

“There are three story homes, bridges and churches built with this plant,” Lira said.

The research is expected to be completed by the first quarter of 2015.

bamboo, construction, Venezuela
Previous Post Grassroots group formed to save 'over the air' PBS for colonia children
Next PostStanford study reveals Spanish-speakers learning to read don't "just sound it out"