Vultures in the Mayan World 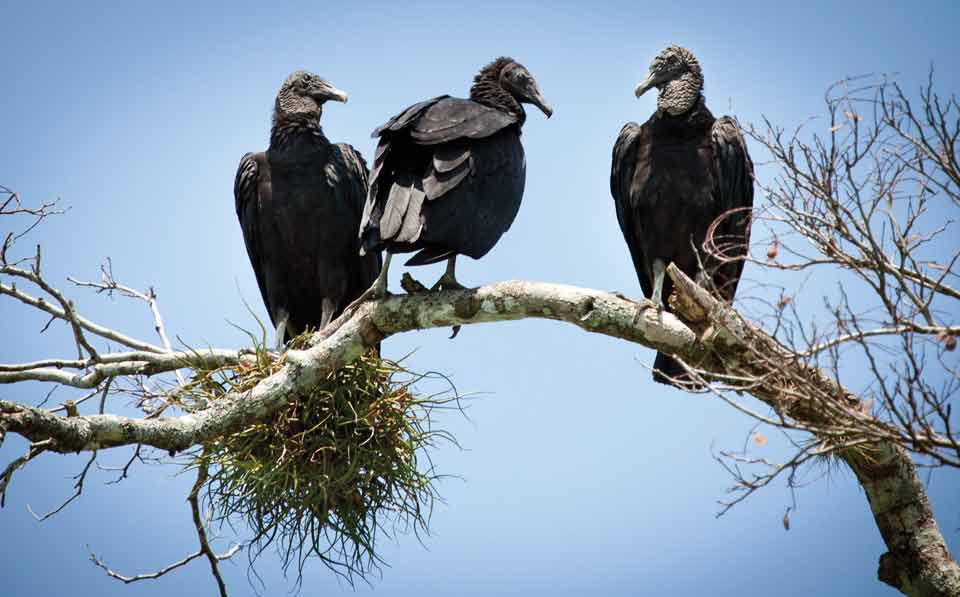 Vultures appear in Post Classic Mayan codices featuring three-dimensional effigies, as Late Classic figurines, or as lid handles for Early Classic tetrapod bowls. You can also find vultures pictured in Mayan hieroglyphic writing, such as those at the Copán ruins in Honduras.

The bald head of a vulture or a buzzard is an adaptation to its carrion diet. The lack of feathers protects them from infections that could be caused by decaying flesh remains trapped in the feathers.

The American black vulture, buzzard or black-headed vulture (Coragyps atratus) is the only species of the genera Coragyps. It is a scavenger, but also eats eggs and newborn animals. These birds find their food using their keen eyesight or by following other vultures that have a good sense of smell.

In Central America you can find vultures in many places—mundane and exotic. At the Parque Nacional Tikal (El Petén, Guatemala), for example, vultures have become accustomed to tourists and feed on sandwiches and other morsels left by visitors in the Great Plaza area. Of course vulture sightings are also common along the highways where they feed on road kill and at garbage dumps near cities and towns. They also gather along rivers where fishermen discard unwanted catches; the Río Pasion near Sayaxche, Petén, is a great vulture-watching spot.

The king vulture is the most impressive of these creatures but is so rare that you are likely to see it only in a zoo.

Lacking the syrinx—the vocal organ of birds—the only sounds the vulture emits are grunts or a low-frequency hiss. These birds lay their eggs in caves, hollow trees or just on the ground. Vultures usually have two broods a year and feed their young by regurgitation.

Vultures should never, ever be killed or disturbed since they serve a useful service to nature (and humans) by cleaning up rotting carcasses. In the United States, the vulture receives legal protection under the Migratory Bird Act of 1918.

I find all vultures photogenic because they are so dark; it is a challenge to get acceptable lighting. The king vulture, being mostly white, is much easier to photograph.

Although the Maya also depict water birds, hummingbirds and macaws, the vulture is relatively well documented in Mayan epigraphy and iconography. There are many Mayan cultures whose local folklore includes vultures as major actors in the local stories.

Although these are birds are not as colorful as a macaw, as graceful as a hummingbird, or as majestic as an eagle—and definitely not as tasty as a duck—vultures are a component of Mayan art, cosmology and folklore. We hope this article has, at least a bit, changed your view of these birds.

Guatemala, Mayan, vultures
Previous Post New website honoring history and service of Latinos in the military strives to be an educational tool for teachers
Next PostViernes Video: Latina actress goes after the Hollywood Dream with her own web series

New website honoring history and service of Latinos in the military strives to be an educational tool for teachers
Comment
Viernes Video: Latina actress goes after the Hollywood Dream with her own web series