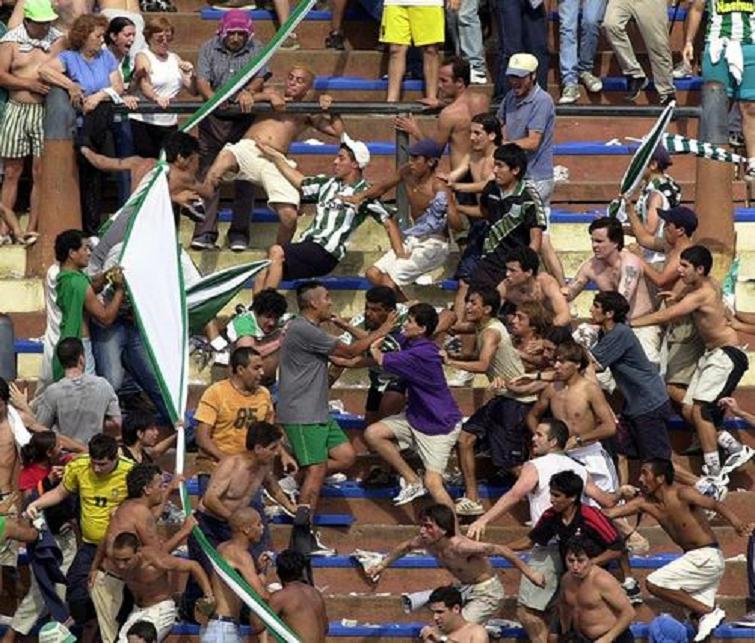 BUENOS AIRES, Argentina – The organizers of the World Cup in Brazil are working with Interpol and law enforcement officials from Argentina and Uruguay to control the arrival of violent fans during the World Cup.

The joint action plan is particularly focused on the state of Rio Grande do Sul, which has seven overland border crossings.

It’s at these border crossings that a majority of the barras bravas – violent soccer fans from several Latin American countries, particularly Argentina – are expected to arrive in Brazil. Many of them have criminal records that include murder, drug trafficking and vandalism.

Some Argentine fans are included in the so-called “risk group” for the tournament, according to Col. Kleber Senisse, the security coordinator for the 2014 World Cup Steering Committee in Rio Grande do Sul.

“The Argentine hooligans, or barras bravas, as they are known, may cause problems when they’re in Brazil,” Senisse said. “With the help of a database and Interpol, we’re doing the international security work needed to analyze the fans that pose risks.”

Senisse said many of these fans may be prevented from entering Brazil.

On March 13 in Porto Alegre in the state of Rio Grande do Sul, security forces from Brazil and Argentina carried out a simulated operation during a soccer match between Brazil’s Grêmio and Argentine squad Newell’s Old Boys. They also had the help of security forces from Uruguay, which shares a border with both countries and has experienced an increase in violence among soccer fans.

Officers from the Federal Police, the Federal Highway Police, the Military Brigade and a variety of security agencies monitored soccer fans as they left Argentina and arrived in Brazil.

“Some Argentine fans were carrying lethal weapons and drugs that are prohibited in Brazil, such as marijuana, and were not allowed to enter the country,” Senisse said. “We surveyed the fans who were potentially involved in violent groups.”

During the World Cup, the Brazilian and Argentine governments have committed to expanding the police’s presence along the border region, according to the Special Secretariat for Security at Major Events (SESGE) of the Ministry of Justice of Brazil.

“All of the border control and highway safety mechanisms will be expanded to ensure the comfort of the fans who want to come to Brazil to take part in a joyful, beautiful celebration,” SESGE Secretary Andrei Rodrigues said. “Those who want to come to the country to engage in acts of violence will be subject to Brazil’s laws and strict enforcement by the police.”

The World Cup security initiatives will be coordinated by the International Police Cooperation Center, in Brasília. The agency is made up of law enforcement representatives from all 32 of the participating countries.

Cooperation with Argentina will be even more intense. Due to its geographic proximity and the significant influx of Argentine fans expected during the World Cup, Argentine police also will be present in Brazil’s stadiums.

However, no police powers will be granted to foreign police officers in Brazil, as all will be unarmed.

“Each Argentine police officer will be accompanied by a Brazilian police officer and they will integrate with the citizens of their country, facilitating the security process for the event,” Rodrigues said.

The number of Argentine police officers will be established based on the operational plan and the estimated turnout for each venue.

For the match between Argentina and Nigeria in Porto Alegre on June 25, 29% of the tickets were sold to foreigners, of which 24% are Argentine. That’s nearly double the World Cup Average of 15% foreign fans per stadium.

The Brazilian police have yet to receive a list of violent Argentine fans from Argentine authorities, Senisse said.

But the group Hinchadas Unidas Argentinas (HUA), which brings together more than 30 groups of barras bravas, filed a motion with the Argentine justice system seeking to prevent the exchange of information regarding fans with criminal records.

“The record of criminal recidivism is private,” Débora Hambo, an attorney for the HUA, told the website infobae.com.

The NGO Salvemos al Fútbol (SAF), which brings together family members of the victims of barras bravas, said HUA’s motion is without merit.

“It’s an outrage. We are going to demand that the Argentine authorities send the relevant information to the Brazilian government so these offenders can be kept out of stadiums,” said SAF President Liliana Suárez.

Suárez’s 19-year-old son, Daniel García, was killed by barras bravas associated with the teams Tigre and Morón during the 1995 Copa América in Uruguay.

On April 1, the SAF and the NGO Fútbol en Paz in Argentina sent a letter to Brazilian President Dilma Rousseff, requesting “zero tolerance for the entry of barras bravas included on the lists of Argentine soccer’s security agencies.”

The letter was presented to the Brazilian Embassy in Buenos Aires.

Suárez is hoping there will not be a repeat in Brazil of what the barras bravas did during the 2010 World Cup in South Africa, where their actions resulted in the death of an Argentine soccer fan.