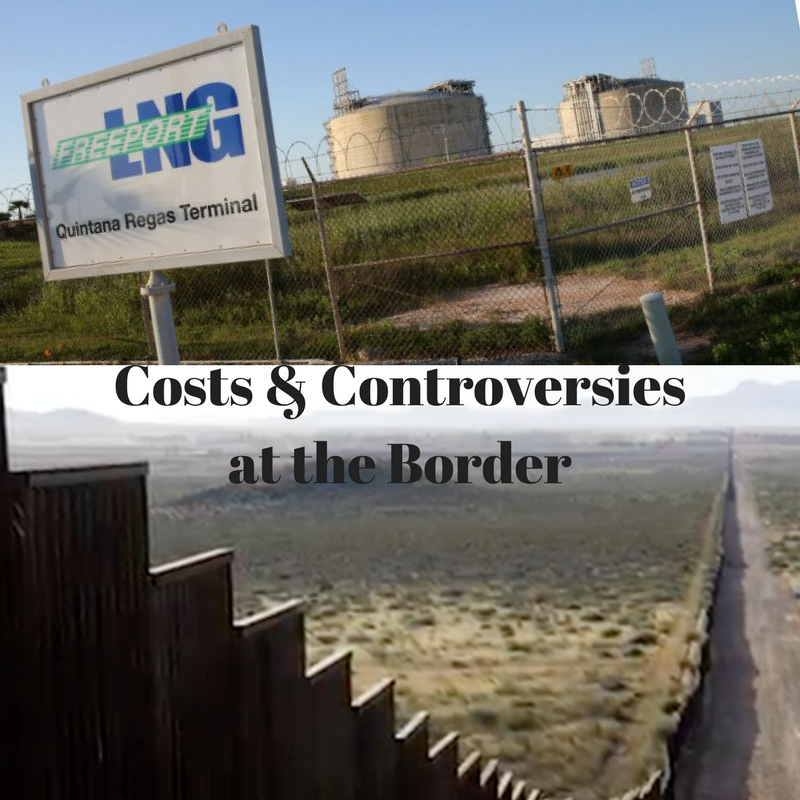 It looks to be construction season in South Texas. Along this stretch of the U.S.-Mexico border, 31 miles of wall may soon be going up and companies are wading through the final paperwork for building liquefied natural gas (LNG) export terminals in the Port of Brownsville.

At first glance, these two major projects may not seem to be related, beyond dominating local news and promising dramatic results in either the region’s security or economy. Yet both of these projects will affect the Valley’s economic, landowner, and environmental interests, and locals’ concerns have been largely given short shrift.

Along the border, the construction push has picked up momentum in recent months and attracted its share of controversy. Beyond opposition surrounding the border wall for political or fiscal reasons, this particular stretch of land slices through some of South Texas’ most cherished sites, including the 2,088 acre renowned Santa Ana National Wildlife Refuge that is home to more than 400 bird species and also a sanctuary for monarch butterflies migrating back and forth from the United States to Mexico.

The border wall’s logistics have been largely settled as Immigrations and Customs Enforcement (ICE) shifted around its budget to find funding and initial preparations appear to be already beginning.

Meanwhile, along the Port of Brownsville, three companies are moving through the final regulatory stages for constructing LNG export terminals that would load the gas onto tankers and ship it out to all corners of the world. These export terminals have been moving through the regulatory process for years, after the shale boom pushed companies to look toward exporting rather than importing natural gas.

Both projects, however, come with costs and controversies.

For the border wall, Valley residents — as well as all Americans — are quite literally paying for the construction with their tax-payer dollars. Yet, many residents are also paying the cost of having the barrier built atop their private land and shouldering the burden of fighting the government for fair compensation.

Then there are the economic consequences for local shops, restaurants, and hotels that come when tourists, scientists, and bird watchers stop making the trip to these wildlife refuges to look for rare migratory birds or observe the butterflies.

The LNG terminals also bring their own concerns. Ironically, for a project that promises an abundance of high-tech jobs, the project’s biggest risk appears to be destroying other jobs in the process.

Commercial fishing and shrimpers, as well as beach tourism stand to be hit the hardest. For example, Brownsville’s shrimp trawlers take in 13 to 15 million pounds of shrimp every year, and have complained that the LNG terminals’ construction into the marshes and wetlands could endanger their economic livelihood.

This concern is compounded by commercial fisherman and shrimpers potentially restricted movement around the port, as the LNG export terminals expect to receive ten tankers a week, with each boat blocking port traffic for around three hours.

Securing our borders and supporting economic development are important priorities, but for projects of this magnitude there should be a robust and transparent local, state, and national debate. We should not get caught up in thinking that a wall is the only way to secure our borderlands — as Representatives Will Hurd, Henry Cuellar and Senator John Cornyn have persuasively argued in recent days — given the less intrusive, technological options that also could do the job. Nor should we green-light LNG terminals just because there are possible energy jobs hanging in the balance, since they could have repercussions across unrelated sectors.

These are complicated decisions that deserve to be treated as such, with residents and their representatives clearly and publicly weighing in on both the short-term and long term benefits and costs.

Whether its local residents who are learning more about the projects or regulators in Austin and DC that are reviewing the projects, the time to be asking the tough questions is now.

Antonio Garza is with the law firm of White & Case in Mexico City. Mr. Garza, a South Texas native, served as the U.S. Ambassador to Mexico from 2002-2009, is a past Chairman of the Texas Railroad Commission, was Texas’ 99th Secretary of State and is a former Cameron County Judge. You can reach him through tonygarza.com and follow him on Twitter @aogarza.