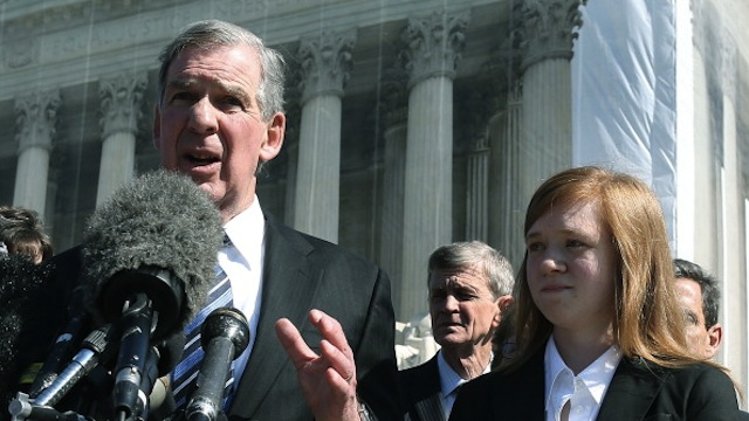 LatinaLista — Affirmative Action has always been a contentious topic and the Supreme Court’s recent action in the Fisher v. University of Texas, at Austin doesn’t relieve the tension that surrounds it. In many ways, it just adds to it.

The case brought before the Supreme Court centered on Abigail Fisher, a white woman who was rejected for admission by the University of Texas, at Austin. She said that her rights were violated by UT-Austin’s consideration of race and ethnicity in admissions decisions.

An article in Inside Higher Ed outlines the confusion some have with the Supreme Court’s final decision and how it most probably will lead to more legal challenges in the future.

The Civil Rights Project of the University of California has been gathering and making available on their site all pertinent information to the case. In addition, they asked the country’s leading constitutional law scholars to analyze the Supreme Court decision and share what it exactly means for universities striving for a more diverse campus.

The U.S. Supreme Court’s decision in Fisher v. University of Texas at Austin reaffirms thirty-five years of precedent upholding the compelling interest in educational diversity in higher education, and clarifies the legal standards that the courts and educational institutions must follow to comply with the Constitution.

Consistent with the Court’s previous rulings in Regents of the University of California v. Bakke and Grutter v. Bollinger, the Court has upheld the value of diversity in promoting important educational benefits, in addressing racial isolation and stereotypes, and in preparing students for leadership in a diverse society. At the same time, the Court has reinforced its earlier rulings that university admissions policies must be narrowly tailored and necessary to advance the compelling interest in diversity.

Prior to its ruling in Fisher, the Supreme Court most recently upheld the constitutionality of race-conscious admissions policies designed to promote the educational benefits of diversity in higher education in its 2003 decision in Grutter v. Bollinger. That opinion, which drew on Justice Powell’s opinion in the 1978 case of Regents of the University of California v. Bakke, held that promoting educational diversity in higher education is a compelling governmental interest that can justify the use of race in admissions and that race may be used as a “plus” factor in competitive admissions processes.

In Fisher, the Court reaffirmed this basic reasoning, stating that “the attainment of a diverse student body . . . serves values beyond race alone, including enhanced classroom dialogue and the lessening of racial isolation and stereotypes.” (Slip. Op. at 6)  The Fisher Court’s opinion offers a clear endorsement of the Court’s Grutter opinion, where the Court concluded that the promotion of diversity in higher education is indeed compelling:

“We have repeatedly acknowledged the overriding importance of preparing students for work and citizenship, describing education as pivotal to ‘sustaining our political and cultural heritage’ with a fundamental role in maintaining the fabric of society. . . . For this reason, the diffusion of knowledge and opportunity through public institutions of higher education must be accessible to all individuals regardless of race or ethnicity.”

Moreover, as the Grutter Court stated, higher education “must be inclusive of talented and qualified individuals of every race and ethnicity, so that all members of our heterogeneous society may participate in the educational institutions that provide the training and education necessary to succeed in America.”

The Fisher Court also reaffirmed that colleges and universities enjoy academic freedoms under the First Amendment in creating their student bodies and are entitled to deference in defining their interest in diversity as an essential educational benefit for all students. As the Fisher Court stated: “The academic mission of a university is ‘a special concern of the First Amendment. . . . Part of ‘the business of a university [is] to provide that atmosphere which is most conducive to speculation, experiment, and creation’ and this in turn leads to the question of ‘who may be admitted to study.’”

At the same time, the Court’s decision in Fisher clarifies the standard that courts need to apply in determining whether the means colleges employ to pursue a diversity interest satisfy the Court’s standards established in Grutter. The Supreme Court disagreed with the lower court’s assumption that the university’s “serious, good faith consideration of workable race-neutral alternatives” was “sufficient to satisfy strict scrutiny” regardless of what an objective review would indicate.

The Fisher Court held that to substitute a determination of “serious, good faith consideration” for an actual demonstration “that available, workable race-neutral alternatives do not suffice” will not satisfy the standards of Grutter. Institutions must provide evidence that they have complied with narrow tailoring and not merely assert that they have engaged in good-faith attempts to explore race-neutral admissions policies before they adopt race-conscious ones.

Rather than deferring to a university’s own determination that race-neutral means are insufficient to obtain the benefits of a diverse student body, the Fisher Court emphasized that admissions plans must be closely examined and that the final determination of constitutionality remains in the hands of the courts.

Because the lower courts misinterpreted the Grutter standards by allowing greater deference to the University of Texas in showing that the institution had explored workable race-neutral alternatives before adopting a race-conscious policy, the Supreme Court remanded the case back to the lower courts to evaluate the evidence under the correct legal standard: “Fairness to the litigants and the courts that heard the case requires that it be remanded so that the admissions process can be considered and judged under a correct analysis”.

The Fisher Court also noted that the courts can “take account of a university’s experience and expertise in adopting or rejecting certain admissions processes,” but the ultimate determination of whether race-neutral alternatives would produce the educational benefits of diversity needs to be made by the courts, and with great care.

The Fisher Court also clarified that the lower courts must determine that an admissions process works in a way that each applicant is evaluated as an individual and that race or ethnicity is not a defining feature of the application.

The sole dissenting opinion in Fisher by Justice Ginsburg also fully supports the basic standards of Bakke and Grutter. Justice Ginsburg’s opinion proposes that the record in the lower courts supports the determination that the University of Texas at Austin complied with the requirements of Grutter, thus making a remand to the lower courts unnecessary.

Even though Justice Ginsburg and the majority parted company on the issue of remand, she agreed that the Court “rightly declines to cast off the equal protection framework settled in Grutter,” while emphasizing that all of the elements of strict scrutiny as articulated by Grutter were met on the record.

The decision in Fisher, like the Court’s ruling in Grutter, clearly rejects a constitutional requirement of an absolute race-blind approach to higher education admissions that had been advanced by those challenging affirmative action, and that were again advanced by the petitioner and her amici in Fisher.

Admissions programs that consider race as one of many factors in the context of an individualized consideration of all applicants can clearly pass constitutional review.

The Supreme Court in Fisher has reminded universities of the steps they need to follow to meet those constitutional requirements. On remand, the university will have the opportunity to show that its policy satisfies the requirements of Grutter.

In sum, the Fisher decision makes clear that promoting diversity in higher education can justify race-conscious admissions policies when they are carefully designed and consider race only as part of a flexible and individualized review of all applicants.

There is nothing in this opinion that should lead universities to abandon affirmative action. We encourage universities to more fully document the factual necessity of their plan and the reasons why some limited consideration of race in a holistic review process was the only practical way to achieve the diversity they found necessary for compelling educational reasons.

We do not believe that such a showing will unduly burden universities or undermine their plans.