Guest Voz: 6 Steps The President And Congress Can Take To Help Young Men Of Color 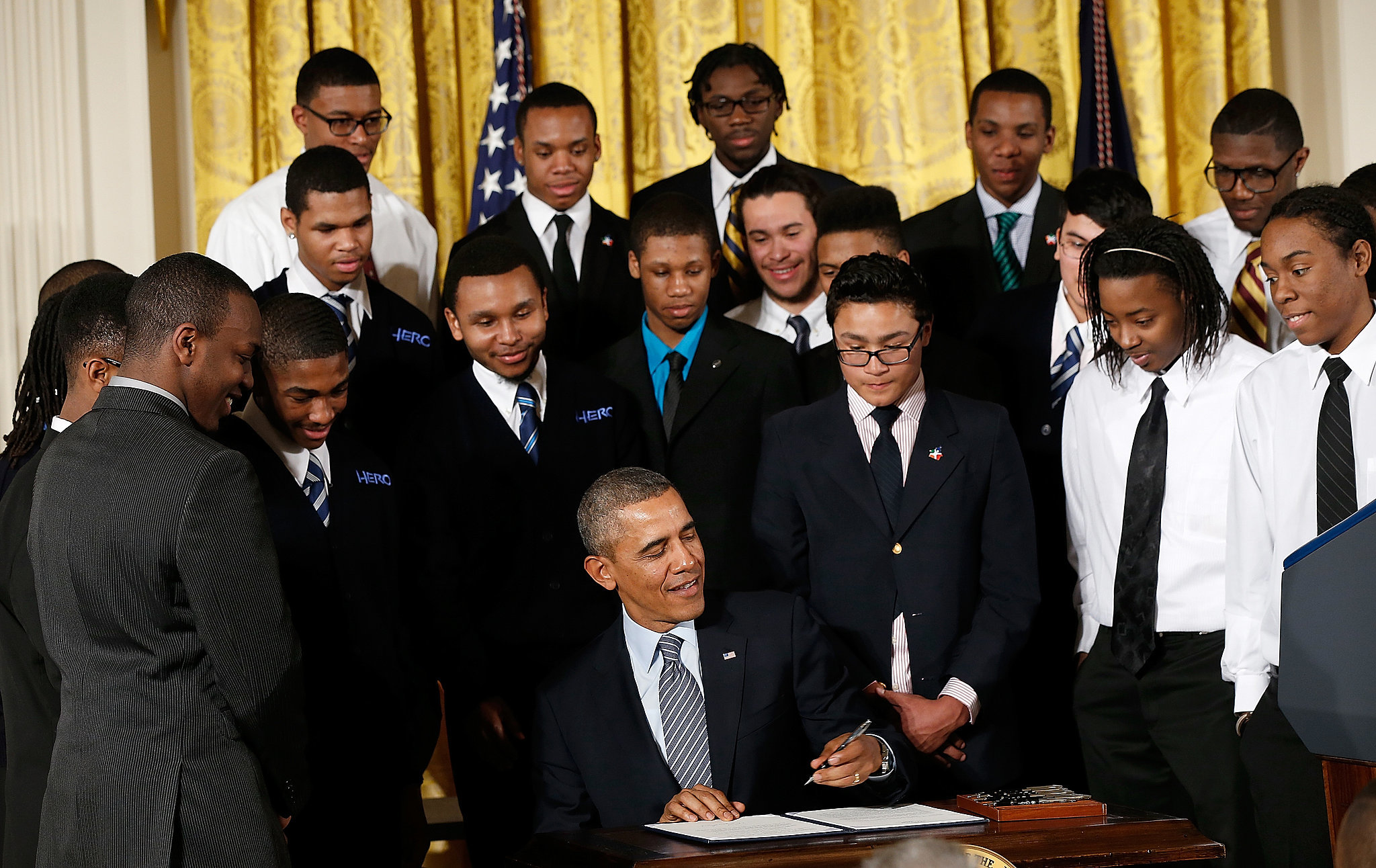 President Obama recently launched “My Brother’s Keeper,” an initiative that aims to address the profound challenges young men of color face. A long overdue and sorely needed endeavor, the President is using his bully pulpit to call on government, nonprofit, and corporate leaders to get serious about improving the life outcomes of young men of color.

This initiative, coupled with the efforts to increase college access and the overhaul of the crack-era drug sentencing guidelines that disproportionately punished non-violent minority offenders, shows the administration’s efforts to address some of the issues young men of color face.

These actions are welcome, yet the reality is that it should not be just the President’s responsibility to address the challenges young men of color face. Congress, local lawmakers, and leaders across the board should also step up and do their share to support these efforts.

In spite of the dire statistics, there are programs that are successfully providing ladders of opportunity to help men of color escape the traps of poverty and despair. Programs such the Hidden Genius Project, Project MALES, and the 100 Black Men of the Bay Area Community School, to name a few, are examples of interventions happening at the local level that are successfully engaging young men of color.

As the president embarks on this effort, the focus should be on actionable short and long-term solutions that improve the outcomes for this growing demographic. Here are six things the Administration and Congress can do to start:

1. Data collection: President Obama can and should call on all federal agencies to coordinate and share data where appropriate and perform a review of programs targeting low-income communities. In the absence of data, it is virtually impossible to evaluate programs and make necessary improvements that will have long-term impacts. Agencies such as the Department of Labor and the Department of Education are ideally positioned to perform these evaluations because they already have support for this type of review through allocated funds from the Workforce Innovation Fund and funds to evaluate “what works”.

2. Increase access to early childhood programs and close the school readiness gap. The first signs of an achievement gap start as early as 18 months of age. By age 4, children of wealthier parents have heard 30 million more words than low-income children. Studies have shown that kids that start school on the right foot early have greater chances to succeed than those who do not. Findings from state preschool programs and longitudinal studies conducted over the past several decades, have shown that high-quality preschool can improve school readiness for children of color. For example, studies of high-quality preschool programs in Tulsa and Boston have shown that children can make up six months to one year of learning during one year of preschool. Children who participated in the groundbreaking HighScope Perry Preschool Project were, for example, more likely to complete high school, become employed, and avoid incarceration.

3. The Department of Justice should evaluate the effect of Stand Your Ground laws on public safety and how these laws disproportionately impact communities of color. In testimony before the Senate Judiciary Committee Professor Ronald Sullivan testified that, “In non-Stand Your Ground states whites are 250 percent more likely to prevail on the theory of justifiable homicide of a black person compared to a white person.” By comparison in Stand Your Ground States whites are 354 percent more likely to prevail in the same scenario. DOJ should formally monitor the 22 states that have adopted these laws to track whether and to what extent homicide rates have increased, whether any increase in homicides can be explained by justifiable self-defense, and the degree to which the application of these laws has a racially disparate impact.

4. Expand Opportunities to Prepare for the Workforce: Approximately 1 in 4 African Americans and 1 in 6 Latinos under 25 are unemployed. In large part this reflects inequities in our educational system. For every 100 African-American students that enter high school, only 16 will be awarded any postsecondary education credential – undergraduate certificate, associate’s degree, bachelor’s degree, or higher — within 10 years. The long-term impact of lower educational attainment on employment and earnings is clear. The Federal government needs to make it easier to pay postsecondary education by permitting families to apply earlier for federal student financial aid. And apprenticeships should also be expanded as they have been shown to significantly boost workers’ lifetime wages and create pathways to well-paying careers for unemployed young workers.

5. Immigration reform: While Republican House Leaders in Congress twiddle their thumbs deciding whether or not to bring an immigration reform bill to the floor, millions of young Latino men are living in fear and uncertainty due to their lack of immigration status. Passing comprehensive immigration reform with a path to legalization is vital to improving the lives of Latino males and their families. According to the Pew Hispanic Center, there were 6.3 million men living in the United States in 2008 as unauthorized immigrants. And men account for the majority of potential DREAM Act beneficiaries, at 1.2 million or 56 percent. Legalizing Latino males’ statuses would allow them to pursue their education and have better employment opportunities and wages which in turn will allow them to become self-sufficient for the long term.

6. Gather more data on LGBT youth: Last month, the U.S. Department of Education released its guiding principles to improve school climate and discipline. This guidance makes tremendous strides in reporting on the stark racial disparities in school discipline, however, missing from this groundbreaking work are lesbian, gay, bisexual, and transgender, or LGBT, youth—who are also disproportionately affected by harsh school discipline policies. There continues to be a dearth of data to quantify the unique experiences of these youth in schools, and much of that data is anecdotal. More data is needed to fully understand the impact of school discipline on LGBT youth in order to help inform policymakers, administrators, and school districts on how to improve school climate for LGBT students and dismantle the school-to-prison pipeline.

Addressing the needs of men and boys of color is not an African American issue or a Latino issue. It is an American issue that affects our entire economy, particularly as the share of people of color among the U.S. population continues to grow.

Communities of color will account for the majority of U.S. residents by 2043 and make up a majority of the workforce by 2045. Black and Latino boys are an important part of our nation’s future and when we fail them, we fail society as a whole.

As the book All-In Nation points out, improving the economic outcomes of people of color would benefit our economy in the long term. Thus, responding to the president’s call to action is not just the right thing for our young men of color but it is also economically sound.

Vanessa Cárdenas is the Vice President of Progress 2050 at the Center for American Progress.

African American, latino, policy, President Obama, youth
Previous Post Botas Picudas: New style emerges from Mexico and makes a 'point' in Austin
Next PostViernes Video: Diego Luna explains why it was important for him to make the film "Cesar Chavez"

Botas Picudas: New style emerges from Mexico and makes a 'point' in Austin
Comment
Viernes Video: Diego Luna explains why it was important for him to make the film "Cesar Chavez"