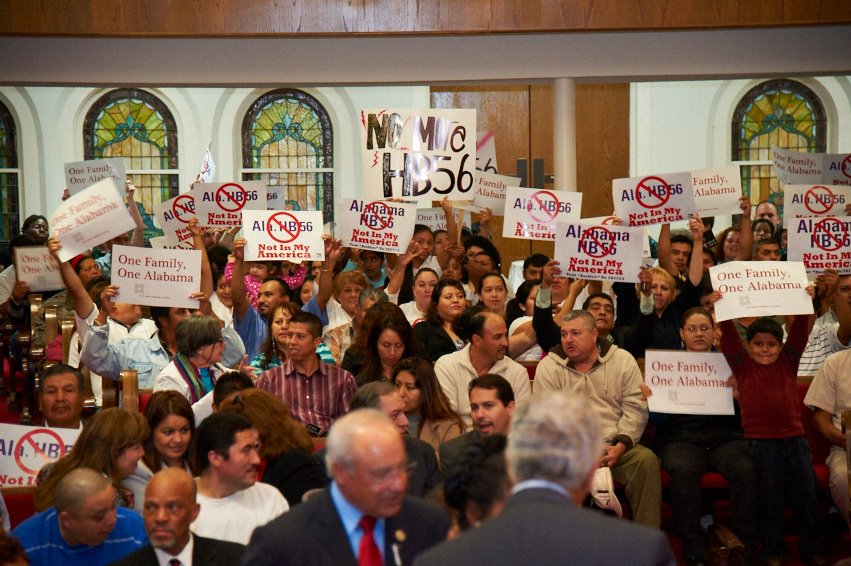 In its original format, Alabama’s Beason-Hammon Act granted school resource officers the right to badger 5th graders on the basis of their immigration status. The state of Alabama, which passed the Beason-Hammon Act (or HB 56) in June of 2011, was the only state in the country requiring public school administrators to verify immigration data for new K-12 students.

However, just two months ago in August of this year, the 11th Circuit Court of Appeals struck down the student provision of HB 56, declaring it unconstitutional and a legal breach of Plyer vs. Doe, which mandates that states provide an education to all children, regardless of their immigration status. 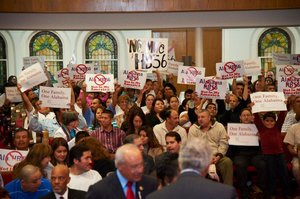 The 11th Circuit also struck down Georgia’s HB 87, a state proposal to criminalize the “transporting and harboring of illegal immigrants,” a statute with anti-Latino written all over it, a proposal with no parallel within the U.S. system of federal law.

These recent rulings were key in dispelling the notion that individual states can create their own immigration regulations, bypassing federal authority. When initially proposed, Alabama’s HB 56 along with Georgia’s HB 87, were sold as valuable pieces of legislation that would boost local economies – laws that would crack down on the presence of those entering the U.S. illegally.

Conservatives billed such bigotry as a quick fix to unemployment and poorly performing schools. Instead, such rogue policies were a complete setback to Civil Rights and due process. In Alabama, children of all ages were deterred from attending school and pursuing their education. Many withdrew out of fear that their families could be deported if questioned about their immigration status.

According to the U.S. Justice Department, over 13 percent of Latino children withdrew over the one year HB 56 operated before federal intervention. Instead of teaching Geometry, classroom instructors were fishing for birth certificates.

As for those local economies and decreasing unemployment rates, Alabama’s number one industry, Agriculture, was damn near decimated. We’re talking an agricultural sector accustomed to generating over $5.5 billion per year. Industries dependent upon migrant labor, like Alabama’s poultry operations, were devastated.

Small farming operations were brought to a halt, as valuable workers were scared indoors. Others simply migrated for the purpose of mere safety. Such complications have also been used as justification for not paying temporary workers – hired and fired a month later, and with no pay to show for it. Many Latinos have refused to report crimes, whether legal or undocumented, any potential scrutiny by local law enforcement could initiate an ICE (Immigration & Customs Enforcement) investigation. 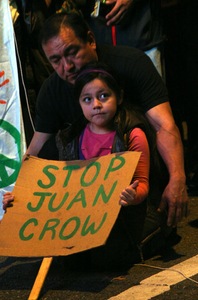 Though portions of these bills were repealed, human rights supporters have continued to sound the alarm, for this branding of social control affects all poor and oppressed people – creating fear and frustration through alienation.

Recently, the state of Alabama has challenged the ruling of the 11th Circuit’s three-judge panel and has asked for a new hearing. Though particular provisions were found to be outright unconstitutional, a violation of the Equal Protection Clause of the 14th Amendment, state officials are arguing that federal courts overstepped state jurisdiction.

Unfortunately, it seems that like Arizona, Alabama is positioning itself to take its immigration law all the way to the Supreme Court. For those of us who are U.S. History buffs, one can’t help but draw a direct correlation to Governor George Wallace’s stand against federal authorities in the 1960’s. His hard-line for segregation against the U.S. Supreme Court aroused racists nationwide.

In addition to federal judges, HB 56 has also caught the attention of President Obama. Even Obama has gone on record stating that “it’s a bad law.” But then again, the Obama Administration deported 396,000 immigrants last year.

While members of Congress, federal judges and state legislators continue to debate, human rights defenders applaud what little progress has been made. We know damn well however, that those of us who despise such racist bigotry must continue to raise our voices.

Deleting a few provisions isn’t going to be enough here, not while racial profiling still runs rampant. When traffic stops and roadblocks become immigrant obstacle courses, ethics become a serious matter of legal concern. If justice fails to prevail in this case, such structural hate could begin to blanket the entire southern Black Belt, setting new precedents for states like South Carolina, Georgia and Arkansas.

In response to this year-long battle, immigrants rights activists have stayed the course. Protestors have deployed an array of tactics such as rallies and community forums, teach-ins and street blockades. DREAM activists and immigrant youth have conducted walk-outs. Workers and adult cooperatives have organized major strikes. Latino customers have chosen to boycott local businesses, while tens of thousands have convened in solidarity.

Organizations as the United Steelworkers Union, ACLU and Immigrant Justice League have joined forces. The NAACP and Southern Poverty Law Center are also on board. Ironically, Birmingham’s 16th Street Baptist Church has served as a rest haven and planning headquarters, the same church bombed by racists in 1963.

The bottom line is that HB 56 is a law that continues to ostracize and divide, conjuring fear, heightening the level of innocent victims and false arrests – perpetuating a complete violation of civil liberties. These anti-Hispanic acts aren’t merely a matter of disenfranchisement. Latino immigrants are being denied the right to even exist in some states, to barely breathe without some “officer of the law” riding their backs with an iron boot.

True, the recent rulings by the 11th Circuit Court of Appeals are great, but there should be no compromise with laws that encourage hate. For those of us who are abreast of such racist regulations, let us spread the word and continue to organize.

For those of you who are learning of such injustice for the first time, join the movement’s noble cause. We the People say, “freedom for all,” and down with HB 56! ■■■

Lamont Lilly is a contributing editor with the Triangle Free Press, Human Rights Delegate with Witness for Peace and organizer with Workers World Socialist Party. He resides in Durham, N.C. Follow on him Twitter @LamontLilly

Alabama, anti-immigrant legislation, featured, Latinos
Previous Post The world gets ready for the first International Day of the Girl Child
Next PostThe Role of Women in Colombia’s Peace Process

Guest Voz: Boricua implores all to join her in opposing a perilous EPA rollback