Guest Voz: Becoming a Multilingual Nation: The Challenge and the Promise 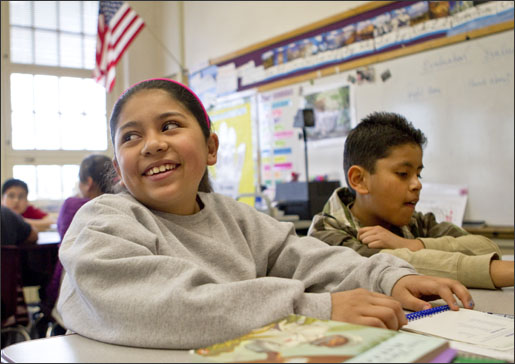 English is the dominant language of the United States. Yet, because we are a ‘nation of immigrants,’ the U.S. Census reports that over 60 million people, ages 5 and older, speak another language than English in their homes.

While some in the country feel threatened by these statistics, others are embracing them and looking to them as predictors of what lies in the future for the United States. One of those people is Yvette Donado.

My topic is, “Becoming a Multilingual Nation: The Challenge and the Promise.” That is an apt characterization: Becoming a multilingual individual, let alone a multilingual nation, IS a challenge. But we continue MAKING that effort because the return on investment is incalculable — economically, culturally, socially, politically and in terms of living a rich life.

I can assure you that no one is more passionate about multilingualism than ETS. Linguistic diversity is a source of our strength and creativity in our communities and as a nation.

Now let me ask a question: Is there ANY nation more multilingual than the United States? One in every five people speaks a language other than English at home. And not just a few languages, but 381 languages!

In some ways, America has always had a case of cognitive dissonance when it comes to cultural and linguistic diversity. We salute those who leave their homelands for greater freedom and opportunity here. Think of the Statue of Liberty and Emma Lazarus’s poem telling the Old World to keep its “ancient lands” and “storied pomp,” and to “give me your tired, your poor, your huddled masses … the wretched refuse of your teeming shore. Send these … to me.”

But when these masses get here, they and their strange words and ways are not always so welcome.

Emma Lazarus wrote her poem in 1883. The year before, Congress enacted the “Chinese Exclusion Act,” which played on people’s economic insecurities to halt Chinese immigration and prohibit Chinese from becoming U.S. citizens. It was repealed only in 1943, when China was our ally against Japan in World War II, when Japanese Americans were placed into internment camps in California.

I would caution that antipathy toward the immigrant is not always about race. Just as often, religious intolerance and political paranoia have been directed at immigrants of European descent. Catholics, Irish, Jews, Italians, Eastern Europeans — these and others have been targeted and abused.

It was not at all uncommon in the 18th and 19th centuries for public and private schools in the United States to offer bilingual or even non-English instruction. Pressures for assimilation, however, gave rise to English Only instruction.

A good friend of mine in Texas noticed while teaching his first class that most of the students did not understand him. He spoke Spanish to them and was later arrested. In TEXAS! In the sixties! Regrettably, he later decided not to continue teaching.

Education has been fundamentally important in my own life. My working-class parents came from Puerto Rico to New York City for opportunity. Neither completed high school, but they made sure that I did, and that I planned for college.

My parents also INSISTED that I speak Spanish, and that I maintain our Puerto Rican culture so that I would grow up proud of my heritage. I did. And I’m the better for it. Like many of you, I can navigate easily between two cultures, and draw inspiration — and strength — from both.

ETS was founded in 1947 specifically to improve the educational opportunities available to students regardless of family background. Assessments are more objective criteria for reviewing admission to an undergraduate program than family or social or political connections.

Today, our mission is to advance quality and equity in education for learners worldwide, through assessment, research and related products and services. Unlike a corporation that distributes dividends to shareholders, ETS reinvests its revenues in our clients’ programs and into educational research.

ETS has been conducting research on and administering English proficiency assessments since at least 1964, when we developed the Test of English as a Foreign Language — now known as the TOEFL test.

It assesses the English proficiency of foreign students applying for admission to English-speaking post-secondary programs. In 1979, we introduced the Test of English for International Communication, now the TOEIC test, which is used to assess English proficiency for the global workplace.

English continues to gain “market share” as the most common second language in the world. One in four people use English, and many multinationals have mandated English as their common corporate language.

In the United States, English learners are the fastest-growing segment of the K–12 public school population — more than 5.5 million and representing 11 percent of all K–12 students. As you know, these young ELs have varying degrees of English-language proficiency, and the resources available to them in school are just as varied.

In 2010, I became the sponsor of our mission-driven English Language Learning initiative. Although ETS had decades of experience in international English language assessments, our domestic experience was spotty. So we set out to research the status of ELL education.

I met with experts, researchers, teachers, academics, principals and others. We conducted focus groups with teachers, principals and administrators around the country. We invited experts to meet with us, and we hosted two symposia in our K–12 headquarters in San Antonio. You probably know this, but I will summarize a few things we discovered:

The unsettling conclusion is that we are consigning students to futures of underachievement and underproductivity, and their teachers to a lack of fulfillment.

Our future as a nation, and with it our stature and influence in the world, will depend on how effectively we educate the children of immigrants. We are fast on our way to becoming a “majority minority” nation.

By 2050, more than half the U.S. population will be composed of Hispanic, African, and Asian Americans. This “minority” will be the core of the American workforce, responsible for American global competitiveness.

Thankfully, recent research into cognitive development and language learning is showing just how baseless and counterproductive enforced monolingualism is.

Among the arguments against dual-language learning is the notion that learning more than one language overwhelms and confuses a young child and delays acquisition of English skills. In fact, researchers are finding evidence that just the opposite is true — that learning two or more languages from a very early age IMPROVES cognitive abilities in such areas as mental flexibility, abstract thinking and “working memory.”

There is evidence to believe that dual-language learning does this by developing greater tissue density in the areas of the brain related to language, and by increasing brain activity.

Research is also underway into the economic benefits of multilingualism among ELs. In a research collaboration, ETS’s Policy Evaluation and Research Center and Patricia Gándara of the UCLA Graduate School of Education commissioned a series of papers examining the economic impact of bilingualism and biliteracy.

There is ample reason, then, to believe that improving the language-learning opportunities available to ELs is not only the RIGHT thing to do. It is educationally, economically and strategically a WISE thing to do.

The question is, How?

Part of the difficulty in answering that question is the lack of a body of research pointing to the most effective classroom practices for English Learners. This is where ETS excels and can make a real difference. ETS, after all, is primarily a research organization.

One area of focus is on foundational research to support development of a comprehensive English-language assessment system to improve K–12 EL education in the U.S. A second research focus is on improving content assessments — that is, curriculum-subject tests in addition to language tests — for K–12 English learners.

For those who dropped out of high school, we are developing a Spanish-language version of the ETS High School Equivalency Test, or ETS HiSET, that we will launch in January. Unlike the GED, it will be available in both paper and digital formats, making it more accessible to people, and will be less expensive than the GED – and it will be available in Spanish. It will be aligned with the Common Core.

Next Steps and Strategy

English Language Learning programs cannot be viewed as luxuries, extras, or nice things to have. It is wonderful that we have this conference. But let’s face it: We are all in the choir. We need to preach to the unenlightened. And that’s much harder.

But it is not impossible. And we can argue the point from at least three perspectives: 1) from the cognitive and developmental; 2) from economics and competitiveness; and 3) from demographics.

As for strategy, we can undertake policy advocacy, measures to influence public opinion, and educational research, development and implementation. We all have our part to play. Pick an argument, learn it, then adopt the strategy that fits and works best.

An approach that worked beautifully is the California State Seal of Biliteracy. In 2011, California became the first state in the nation to affix the seal to diplomas of high school seniors who demonstrate biliteracy proficiency.

Californians Together, with us here, is a coalition of 23 statewide parent, professional and civil rights organizations focused on improving the education of English learners. Its campaign shifted public perceptions of language diversity. The goal was for language diversity to be viewed not as a liability, but as an asset for the state.

And it worked. Among its supporters were teacher unions, the association of state school administrators, AND chambers of commerce. Last year, more than 10,000 graduates earned the Seal of Bilteracy.

We should applaud Californians Together. They proved that persistence and unity pay off. Similar movements can be undertaken in every other state.

Time and again, research has shown that higher levels of educational attainment are associated with improved health and longevity; individual, family and community stability; and more inclusive, adaptable societies.

For the United States in the remainder of the 21st Century, the question is simple: What kind of society do WE want to be?

I am fond of quoting a great American visionary:

“Bestow great attention on the Spanish language, and endeavor to acquire an accurate knowledge of it. Our future relations with Spain and Spanish America will render that language a valuable acquisition.”

Thomas Jefferson, to his nephew in 1787. Jefferson spoke and valued languages. Let us heed his advice but extend the practice to other languages. Let there be no question: competency in a second or third language is not only valuable, it is an imperative.

Yvette Donado is the senior vice president of the Educational Testing Services (ETS).