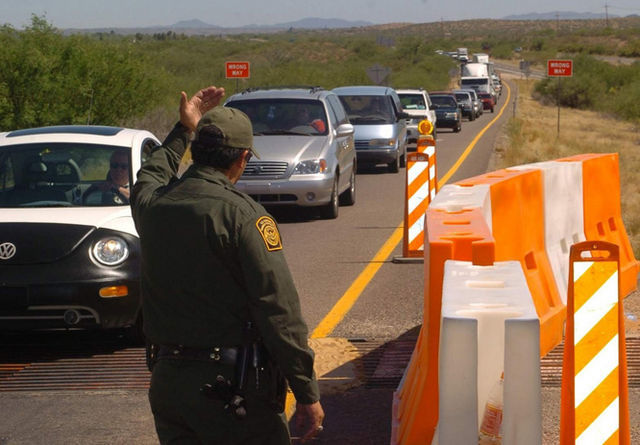 By Claire Maria O’Brien
Eléctrica in the Desert

It’s impossible to wrap one’s head around outraged government denials of racial profiling and general harassment of Latino people in the Southwest. Perhaps the best way to bring this virtual military occupation home to the rest of America is to focus on how Anglos are treated in comparison: Wow, talk about racial profiling!

Who knew it could be so much fun? You may think you’re white, but take it from me – you’re not completely white in America until you’re white at a Border Patrol checkpoint.

I could have made a few million bucks smuggling drugs by now. Plastic bags of cocaine (okay, pot) could have filled my back seat as I sailed through checkpoints from Almagordo to Hot Springs, while weary Latino families stood watching police dogs climb around in their cars.

The Border Patrol is supposed to ask everyone “Are you an American citizen?”, but evidently, whiteness is what makes people American: the guards always just give me a big smile and wave me forward as if they are greeting a visiting Duchess.

I step on the gas so I don’t have to look the waiting Latino people in the eye. I want to stop and stick my head out the window and yell, “Lo Siento – todo mundo!”, but Latino families are way too polite to want to hear me yell to everyone I am sorry.

They would be embarrassed for me, and the children would wonder why such an old grown-up had never learned her manners.

Anyway, 98 percent of travelers wishing to avoid the Border Patrol aren’t dumb enough to go through the checkpoints, and you can’t miss them because there are 71 of them.

We’ve only got two highways in New Mexico and we’ve only got two cities. Anyone who’s basically just living their lives will be driving either north/south on Hwy. 25 or east/west on Interstate 40.

And almost everyone who has to watch his grandmother as she stands at the Checkpoint, looking away at mountains she could name when she was four, is tired and angry and polite.

Centuries later, when will enough be enough?

The people have had way, way more than enough.

For example, law enforcement has rights at the Checkpoints that it doesn’t have during a regular stop. It can search your car without a specific probable cause and without your permission. How many Anglo parents have to worry more about the cops hauling their teenager off to jail for a joint they had no business looking for, than they do about the pot itself?

Whether Latino families are perfect or whether their favorite uncle has a couple of DUI’s – why should they have to live their lives five times more exposed to state intrusion than the O’Neils who live down the block and have three uncles who can drink Uncle Diego under the table?

Yesterday, I drove from El Paso to Alberquerqe, and was waved through the Checkpoint just south of Truth or Consequences with a polite “Good evening, ma’m”.

Two young Latino men wearing cowboy hats were being grilled next to their red pickup truck by a guard as he scrutinized their IDs. Their dog, riding in the back, leaned anxiously over the side of the truck, not taking his eyes off the trio. I basically floored it, sort of daring John Law to rebuke me as I deserved.

Not a chance. On Rt 25 in southern New Mexico, anyway, I am simply assigned a social identity that has as little to do with who I am as the social category that replaced my role as a journalist with food stamps and life in the projects.

“But…but, I could so easily be from Chile or Brazil, as well as virtually every other Latin American country,” I remarked to an imaginary Border Patrol officer.

Yes, I talk to myself in the car. All the best people do – and the accoustics are ideal.

“I could be a disgruntled third generation French-Venezualan, here to forment a questionable strategy for wresting control of the family oil company back from my government” I went on, ignoring the stares of two elderly tourists as they passed me in a white Lincoln Continental. “I could be an Eastern European Muslim, here to overthrow democracy and, if possible, Western Civilization itself. You know, a country as, shall we say … interested in Islam as America is, could discover a few basic facts, such as how many Muslims are white, with just a few hours of study.

It began to rain for the 37th time that week.

“And you call yourself a desert,” I snapped irritably to the passing landscape, as I turned on the defroster and almost immediately began to sweat.

“Or I could just be a regular Irish bum, as poor as my immigrant great grand-parents, one of thousands sent over to make sure the Democrats take back the House and sweep the 2016 election. “

I could have stuffed my trunk with enough uninspected agricultural products to cover every crop within 50 miles of the Rio Grande with an ambitious blue fungus.

Best of all I could (and should) have transported at least 100 people from Juarez to Alberquerqe, a few people at a time. Three adults or four kids could easily fit in the big trunk of my car for a few hours. I would have filled the trunk with soft pillows, treats, snacks, and music.

It’s about time I made myself useful.

It would have been an honor.

About 25 miles later, the first of what turned out to be a long line of military vehicles appeared like a storm cloud on the crest of a slight hill just ahead. They resembled some kind of tank and they were all exactly the same distance from one another. After I had passed the last one, I watched through my rear view mirror as they splashed through the rain like a green, mechanical snake, headed for the border.