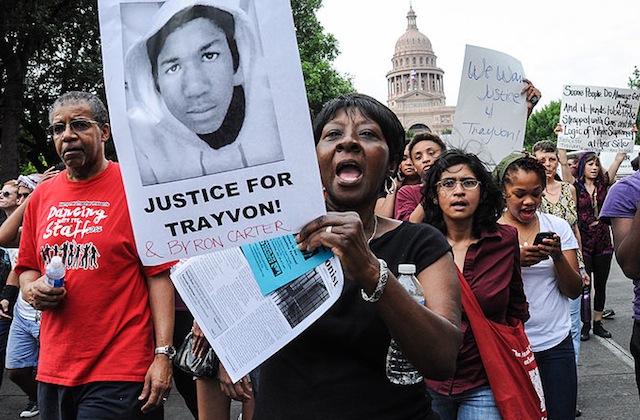 This week, the nation will celebrate the 50th anniversary of the March on Washington for Jobs and Freedom with events in Washington, D.C., and many other cities.

A hot summer of race news — Moral Mondays to preserve voting rights in North Carolina, the efforts of the Dream 9 to expose the vagaries of our immigration policy, and those of the Dream Defenders to undo Florida’s Stand Your Ground law — have led many to speculate on whether we are at the start of a new civil rights movement.

We are definitely at the brink of something. I hope that it is a racial justice movement, one that builds on the legacy of civil rights while bringing crucial new elements to our political and social lives.

We have a chance to explore fundamental questions like the nature of racism, what to do with the variety of racial hierarchies across the country, and how to craft a vision big enough to hold together communities who are constantly pitted against one another.

Using the racial justice frame allows us to fight off the seductive, corrupt appeal of colorblindness, which currently makes it difficult to talk about even racial diversity, much less the real prize of racial equity.

Such language also allows us to move beyond the current limitations in civil rights law to imagine a host of new policies and practices in public and private spaces, while we also upgrade existing civil rights laws at all levels of government.

Finally, the modern movement has to be fully multiracial, as multiracial as the country itself. The number and variety of communities of color will continue to grow. If all of our communities stake out ground on race, rather than on a set of proxies, we will more likely be able to stick together when any one of us is accused of race baiting.

The Need for Plain Speech

We cannot solve a problem that no one is willing to name, and the biggest obstacle facing Americans today is that, in the main, we don’t want to talk about race, much less about racism.

Our societal silence makes room for inventive new forms of discrimination, while it blocks our efforts to change rules that disadvantage people of color. Unless we say what we mean, we cannot redefine how racism works or drive the debate toward equity.

Americans define racism as individual, overt and intentional. But modern forms of racial discrimination are often unintentional, systemic and hidden.

The tropes and images of the civil rights era reinforce the old definition. People taking on new forms constantly look for our own Bull Connor to make the case. We can find these kinds of figures. But there’s inevitably debate about whether they truly hit the Bull Connor standard, as we can see in popular defenses of Sheriff Joe Arpaio and Gov. Rick Scott.

Politicians, employers and public administrators have all learned to use codes for the groups they target.

The notion that all racism is intentional and overt is a fundamental building block of the false solution of colorblindness.

The obsession with examining the intentions of individual actors in order to legitimize the existence of racism undermines efforts to achieve justice. This is because the discussion of racism in the U.S. is devoid of any mention of history, power or policy.

The person who notices racial disparities in health care, for example, is vilified for so-called race baiting, while someone like Rep. Steve King is virtually unchallenged when he puts up a sign referring to the State Children’s Health Insurance Program as “Socialized, Clintonesque, Hillary Care for Illegals and Their Children.”

Hey, he didn’t say Latino illegals, so that’s not racist.

Fifteen years of brain research have revealed that ignoring racial difference is impossible, and that most human beings are unconscious of their biases. Thus getting people to acknowledge and change their biases voluntarily is often very difficult, and if it does happen, is insufficient to address the institutional problem.

Even people who don’t dismiss the need for race talk entirely often have the wrong end goal in mind. They encourage respect for diversity, or multiculturalism. Those are both good things. But neither one is the same thing as justice.

It is entirely possible to have a diverse community, city or workplace that is marked by inequity. In restaurants I’ve worked in and observed, the white workers in the dining room get along perfectly well with black and Latino workers confined to the kitchen and dishroom, but they are not in an equitable situation.

In being explicit about working on racial justice, our modern movement has a chance to push past the diversity goal and define justice.

Justice and Rights Aren’t the Same

The difference between the two is suggested for me in that old school precursor to jokes, “There oughta be a law.” There ought to be lots of laws and we won’t get them unless we recognize the limits of the laws we have now in relation to justice.

Rights guaranteed by the Bill of Rights, the 13th and 14th, 15th and 19th Amendments to the Constitution. Civil rights include civil liberties (such as the freedom of speech, press, assembly, and religion), as well as due process, the right to vote, equal and fair treatment by law enforcement and the courts, and the opportunity to enjoy the benefits of a democratic society, such as equal access to public schools, recreation, transportation, public facilities, and housing

“Civil” refers largely to political rights, but communities of color need change in economics and culture, too, the kind of change that hasn’t yet been encoded in the law. People of color should be able to see ourselves on television and in movies as something other than villains far more often than we do now, but there is no law that calls this a “right.”

Food justice would mean that people could get access to fresh produce at reasonable prices within a short distance from their homes, yet no law punishes grocery store chains for abandoning poor neighborhoods of color.

But laws and other structures could be crafted to change these arrangements that too many people currently accept as “just the way it is.” In fact, over time, the kinds of rules and regulations that once supported cultural rights, such as the fairness doctrine in communications law, have been steadily gutted by the same deregulation that created Fox News.

People should not be subjected to exploitation on the job, but labor laws, including those against discrimination that are in Title VII of the Civil Rights Act, don’t get us anywhere near workplace justice.

After New York Times labor reporter Steven Greenhouse examined the comment threads from his reporting on the growing fast food workers strikes, he was moved to tweet that he’d never seen such lack of sympathy for workers.

Research by Topos reveals that most Americans do not think of crappy jobs as exploitive jobs. They think “entry level” jobs are meant to pay little, and they put all the responsibility for improvement on the workers themselves, in the form of further education to get a better job.

That sentiment was borne out again and again in Greenhouse’s comment thread. The fact that people of color, especially black people, are heavily concentrated in the fast food industry strikes me as the trigger for that kind of easy victim blaming.

The language of justice simply gives us more options for articulating what fairness looks like than does the language of civil rights. Only a big, broad vision will be exciting enough to mobilize Americans for the hard thinking and action required to meet our upcoming challenges. The country’s changing demographics are at the top of the challenge list for me.

When the March on Washington took place in 1963, there was also organizing among Latino, indigenous and Asian communities. These communities were often inspired by and related to the movement against Jim Crow segregation in the South, and they had their own forms of exploitation and discrimination to confront.

The exploitive Bracero Program, which recruited Mexican guest workers for farmwork, had to be ended, and so did its brutal aftermath, Operation Wetback, which deported those same workers when they dared to overstay.

The effects of Japanese American internment had to be addressed, and American Indians were trying to protect families from having their kids stolen right through the 1970s.

Connections surely existed between these groups during the 1960’s, and they cannot be minimized. I know, however, that those ties were not nearly as strong as they need to be today.

My own experience as an immigrant, racial justice organizer has convinced me that building a container that can hold all the experiences different people of color have with racial hierarchy is critically important to prevent further loss of civil rights victories — even more so if we are to expand those victories.

The vast changes in our national demographics are largely due to one of the benefits of the civil rights era: the passage of the Immigration and Nationality Act of 1965, the policy that enabled my people, Indians, to enter the U.S. in significant numbers.

Yet many Indian immigrants and their descendants are all too eager to distance themselves from that very same movement, accepting a role as the “solution” to the “problem” of black insurgence.

My friend Vijay Prashad has written beautifully about this phenomenon in “The Karma of Brown Folk.” The racial profiling of South Asians, Arabs and Muslims following September 11 shocked many of us into a new awareness, but it is still possible, for example, for middle class South Asian Americans in particular to resist the profiling of us, while engaging in the profiling of others.

I say this as an immigrant who has spent countless hours arguing with other immigrants and refugees who refuse to acknowledge our place in a racial hierarchy, and to take that into account as we fight for our own freedom.

It has taken a long time, for example, for immigrant rights marches to stop featuring Latinos and Asians holding signs saying “we are not criminals,” implicitly distancing themselves from the people who are stereotypically cast in the role of “criminal.” And, no, I do not mean white men in suits committing financial crimes.

We can and must get to the place where we all see ourselves as one movement, rather than as a collection of movements working in solidarity with one another.

It’s a subtle shift, but one that would serve us well. Being one movement doesn’t mean we have to lose the specificity of our experiences and solutions, but it does mean that we can engage in a level of joint analysis, planning and action that would make the most of each community’s assets.

The seminal event we commemorate this week was a march for “jobs and freedom,” not a march for civil rights. We can assert collective strength and unity toward those goals with analysis that is explicit about race, campaigns that fight for economic and cultural as well as political change, and organizing that is grounded in a multiracial constituency.

A few months before the 1963 march, Martin Luther King, Jr., wrote in his “Letter from a Birmingham Jail,” “We are caught in an inescapable network of mutuality, tied in a single garment of destiny. Whatever affects one directly, affects all indirectly.”

There is a modern expression of this most fundamentally moral concept, and inserting that idea into the body politic is our own generation’s responsibility.