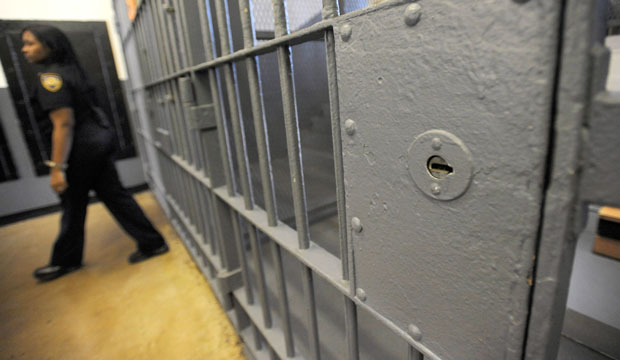 The U.S. Department of Homeland Security, or DHS, has taken commendable steps to improve the immigration detention system, including an automated tool to improve transparency and uniformity in detention-custody decisions and recent guidance on prosecutorial discretion issued by DHS Secretary Jeh Johnson.

However, a Freedom of Information Act, or FOIA, request submitted by the Center for American Progress on October 8, 2014, revealed that these measures are ineffective at protecting lesbian, gay, bisexual, and transgender, or LGBT, immigrants, who DHS recognizes as a “special vulnerability” category. As long as Congress continues to require U.S. Immigration and Customs Enforcement, or ICE, to keep an arbitrary quota of 34,000 immigrants in detention daily, LGBT immigrants are vulnerable to the inherent health and safety risks that detention poses.

DHS has stated that it focuses its detention resources on mandatory and priority cases, and ICE Director Sarah Saldaña recently reiterated DHS’s position that the bed quota requires DHS to maintain 34,000 beds, not detain 34,000 people per day. But CAP’s FOIA request reveals that despite the lack of a mandate to fill the beds, ICE officers nonetheless have a proclivity for filling existing beds, as demonstrated by ICE’s consistent failure to implement the custody recommendations of the RCA tool for LGBT immigrants.

The FOIA request included all of ICE’s automated Risk Classification Assessments, or RCAs, for LGBT immigrants from October 2013 to October 2014, the RCA tool’s custody determinations, and ICE’s actual custody decisions. Instead of releasing these immigrants under community supervision according to its own automated procedures, ICE elected to detain them. Pressure to fill Congress’ bed quota may explain why ICE elects to detain vulnerable populations that its own RCA tool recommends to release. The result of this arbitrary quota is the detention of a vulnerable class of people when detention is neither mandatory under the law nor a priority under DHS policies.

The RCA tool
In January 2013, ICE implemented the RCA tool to determine whether individuals should be detained or released. If they were detained, the RCA determined the appropriate custody classification level. The tool was implemented as part of a series of reforms in response to a 2009 review of the immigration detention system. It is part of the intake process used at immigration detention facilities and takes into account DHS’s enforcement priorities—as well as special vulnerabilities such as LGBT status—to recommend whether an individual should be detained or released under community supervision. The tool’s recommendation of whether to detain or release is supposed to be followed except in extenuating circumstances. In all instances, the officer has the final say, but the intent of the tool was not to always leave it up to the officer’s discretion. Unfortunately that’s not what’s happening.

CAP’s FOIA data reveal that in 70 percent of cases, the RCA tool either explicitly recommended release or provided release as an option. However, ICE officers have the final say over custody determinations, and they elected to detain LGBT people 68 percent of the time when the automated tool allowed for release; 53 percent of the time, this detention did not even include the possibility of release on bond.

A recent study conducted by the DHS Office of the Inspector General, or OIG, questioned the effectiveness of the RCA tool, finding that ICE overrode explicit RCA recommendations in 7.6 percent of cases for the general population. The rate for LGBT detainees was more than twice this, at 19 percent. 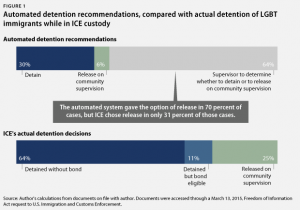 In addition, ICE officers overrode the RCA and chose to detain two out of every three LGBT individuals for which the RCA tool only recommended release. Even when ICE officers decide to set a bond that the detainee can pay to be released pending a hearing, it is frequently too high: Bonds often begin at a minimum of $1,500 but can go all the way up to $15,000, depending on an officer’s assessment. 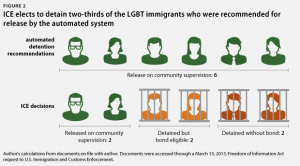 LGBT people are at a heightened risk of abuse in detention

Preventing LGBT people from unnecessary confinement is critical to ensure their safety and security. A University of California, Irvine, study found that 67 percent of nonheterosexual California prison inmates reported sexual assault, compared with 2 percent of heterosexual inmates. A 2013 CAP report that examined nearly 200 reported incidents of abuse against LGBT immigrants in ICE facilities found that the experiences of detained LGBT people are similar to their experiences in other confinement situations.

In fact, the Bureau of Justice Statistics found that nearly 40 percent of transgender inmates in prisons and local jails are sexually assaulted, compared with 4 percent of all federal inmates. Unfortunately, measures to improve the treatment of LGBT people in detention have not been implemented in a way that meaningfully protects them from abuse.

The incidents also highlight ICE’s insufficient response when abuses occur. Rather than releasing these women or even placing them in women’s facilities, ICE gave them the option of being placed in solitary confinement, being transported to a segregated GBT pod in California, or staying where they were. After both women endured more than six months in detention, the courts finally ordered their release.

On November 20, 2014, DHS Secretary Johnson issued a memorandum that outlined the agency’s prosecutorial discretion guidance. The guidance includes a provision on avoiding detention of vulnerable groups whenever possible. Proper enforcement of this guidance is critical to the protection of LGBT immigrants.

However, as long as Congress continues to require ICE to detain 34,000 people daily in order to fill an arbitrary quota, LGBT immigrants will continue to be vulnerable to abuse in detention.

(Editor’s Note: This commentary originally appeared on the Center for American Progress website.)

Sharita Gruberg is a Senior Policy Analyst for the LGBT Research and Communications Project at the Center for American Progress.