WASHINGTON (RNS) This passage from the Gospel of Matthew inviting us to welcome strangers into our midst could not be more salient than it is now, as our lawmakers embark on the long-awaited debate over immigration reform.

Senate hearings recently began after both President Obama and Sen. Marco Rubio of Florida made a strong call for comprehensive immigration reform during and after the State of the Union address. Their statements were encouraging, but lawmakers have their work cut out for them in the coming months — and millions of lives depend on reform. 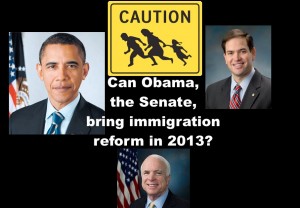 Here’s the missing piece: Any discussion of immigration reform must recognize the international causes that drive unauthorized migration to the United States: hunger, poverty, lack of economic opportunity and inequality. Without addressing the root causes, the numbers of unauthorized immigrants in the United States will continue to rise.

Millions of people have traveled to the U.S. to escape dire conditions back home. With visa wait times exceeding 23 years, many immigrants feel they have no choice but to enter the U.S. illegally to seek a better life for their families.

Without reforming our development policies to address the underlying issues of poverty and economic opportunity in other countries, increased border security and tightened laws will not stop the swell of unauthorized migration across our borders.

Bread for the World is not alone in this sentiment. While Latin America is the source of more than 80 percent of unauthorized migration to the United States, in a 2010 interview for CBS’ “60 Minutes,” Wayne Cornelius, the director emeritus of the Center for Comparative Immigration Studies, stated that increased funding for border enforcement alone cannot curb unauthorized immigration.

If fact, while U.S. spending on border enforcement has increased from $1 billion in 1990 to almost $18 billion last year, it wasn’t enough to stop the number of unauthorized immigrants to the U.S. from rising by 9 million over the same period.

U.S. policy in those migrant-sending countries is aimed at increasing security, not reducing poverty. However, Mexico and other countries in Central America continue to be plagued by unconscionable levels of poverty and lack of economic development.

If we are serious about immigration reform, our efforts must extend beyond increased security to include sustainable development as a main goal. We must also target job-creation projects that specifically focus on areas with high poverty and migration rates.

But immigration reform doesn’t end with improvements in home countries. Despite indisputable contributions to the fabric of this nation, immigrants have some of the highest food insecurity and poverty rates in the U.S.

As part of immigration reform, we must support efforts to reduce poverty here at home, which in turn could contribute to U.S. economic growth.

For centuries, immigration has been a mechanism for poor and hungry people around the world to escape poverty and provide for their families while contributing to U.S. economic development. I pray we will remember that the journey to our shores for opportunity and employment is often triggered by dire conditions that the poor and hungry are trying to escape.

We have a long road ahead in this fight, but we are encouraged by recent movement among lawmakers.

The Rev. David Beckmann is the president of Bread for the World, a collective Christian voice urging lawmakers to end hunger at home and abroad.

Intrn'l Video: (Re)-Uniting Cuban music from around the world
Comment
New report shows less kids going to jail but more children of color remain behind bars or in detention