Guest Voz: Cuban American millennial drafts open letter to Obama asking him “to stand up for the Cuban people” 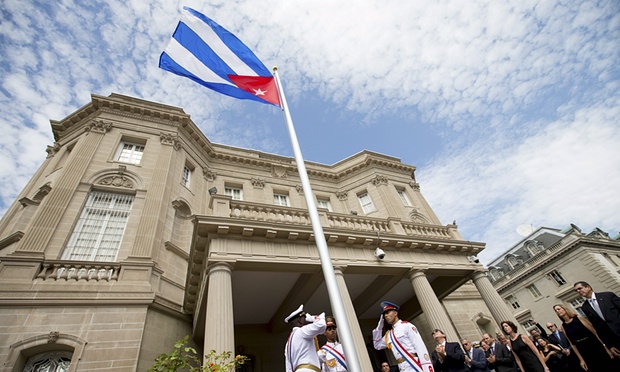 LatinaLista — In much pomp and circumstance, Cuba officially opened its Washington DC embassy today, raising its flag in the United States for the first time in 54 years. It’s a diplomatic and economic move that the Cuban government, and Cubans and those of Cuban-descent, have said is long overdue. The U.S. Embassy in Cuba will not be officially opened until August 14 when Secretary of State John Kerry travels to Cuba.

Yet, there is a faction of Cuban Americans who remain against normalizing relations with Cuba. Among them, Senator Marco Rubio has been an outspoken critic of this turn in relations. He is not alone.

Cuban Americans of all ages have spoken out against why the United States should now recognize Cuba. One person is Cuban American millennial Alain Castillo.

Castillo grew up near the heart of the Cuban exile community in Miami, the son of Cuban immigrants. He views today’s flag raising as something other than progress.

News2Share has released raw footage to Latina Lista of an anti-Castro protester spilling red paint on himself and police during the opening of the Embassy of Cuba in Washington, DC. The act was meant to signify blood spilt by the Castro regime.

Open Letter to President Obama regarding the opening of embassies, bilateral relations
By Alain Castillo

Mr. President, I write to you as a Millennial, who didn’t get hired in their college dream job after graduation and who has loan debt. I voted for you in 2008 because I believed in your message. Lastly, I write to you as a non-elitist, humble man of Cuban heritage. In other words, I fit the criteria to have your attention.

More importantly, I write to you to show disdain, disagreement, dissent and disapproval for your “new” Cuban policy, especially the opening of the US and Cuban embassies in each country this week.

Before I begin, I would like to share some history about my background. My mother and father’s lives were of humble background in Cuba. Both of them grew up poor in Cuba, –my mother growing up on a farm and my father in a poor town.

My father had dreamed of becoming a General for the Constitutional Republic of Cuba; a loyal soldier just like my grandfather. Yet, in 1959, all of their lives would change as a secret communist revolution took over Cuba socially, economically and politically.

I can write on-and-on over this, but one simple truth has remained since that time: NOTHING HAS CHANGED FOR THE BETTERMENT OF CUBANS.

Neither my mother nor father benefitted from the “Hope and Change” forced upon them by the Castro regime, so they packed their bags with only a suitcase full of clothes and they looked forward to real “hope and change” that awaited them in the land of the free, over 30 years ago.

After your Dec. 17, 2014 announcement stating that your State Department team would spearhead the effort to normalize relations with Cuba, there have been many opinions where the pros and cons have been expressed by members of the Cuban exile community, Congress, academia, media outlets, human rights groups, dissidents and pro-Cuban government lobbyist groups, such as the Cuban Study Group.

There have been so many arrests since the December 2014 announcement that the Cuban government is labeling prisoners as “common criminals.”

Mr. President, I have spent a lot of time considering the best things to say in response to this action by your administration in an effort to not be redundant, because so far everything, but the kitchen sink, has been discussed.

What I will argue is for common sense.

To be honest, the “re-opening of the US and Cuban embassies” really is an upgrade of government facilities of both countries. This is more symbolic than anything, but it has been described by your critics, such as author Humberto Fontova, to be questioned on its legal basis. This view has even given more fuel to the fire of others’ opinions overall that “you choose the laws that will be enforced.”

In his article, “Is Diplomatic Recognition of Cuba Even Legal?”, Fontova shared that the Cuban Liberty and Solidarity Act of 1996, Section 201 (13) declares that any easing of a diplomatic relationship with Cuba relies on the fact that “there exists a democratically elected government in Cuba.”

Next, Section. 201 (13) states that “The satisfactory resolution of property claims by a Cuban Government recognized by the United States remains an essential condition for the full resumption of economic and diplomatic relations between the United States and Cuba.”

US law clearly shows that this move is not only premature, but un-American.

I ask this question: What precedent will this new move take for future US administrations? How will we treat Cuba after the Obama era? What if a new President declares this move illegal?

Overall, this move only further legitimizes the Cuban revolutionary government and does not honor the Cuban people at all.

Not only that, it will cause more problems.

For example, will Cubans be able to ask for asylum upon entering US sovereign soil or will they be pushed away?

What were the agreements made between the two parties that gave a go-ahead for this move? Will Cuban government officials be given a chance to freely travel to the US to continue harassing members of the Cuban American exile community?

What comes next, as dangerous, is the actual normalization of relations with Cuba.

Mr. President, as a forbearer of “Hope and Change” you have negotiated with a government that has US blood on their hands where their families of the Brothers to the Rescue pilots never received any justice.

As a matter of respect, I implore you to stand with the grassroots Cuban dissident movement. Do not back down from these egotistical maniacs, but stand up for the Cuban people.

Alain Castillo is a first-generation Cuban American based in Dallas Texas. He is a public school teacher and holds a Bachelor of Science in Journalism from Florida International University.