As we observe Equal Pay Day, I cannot help but ponder the discouraging statistics on how much less women make compared to men, especially Latinas. In particular, I look at how the gender wage gap has affected my mom, a single working mother, and myself.

When my mom and I arrived in the United States from Bolivia in the mid-1980s, she found jobs first cleaning houses, then in a restaurant, and finally as a nanny in the Washington, D.C. suburbs. At the time she earned between $5 and $6 per hour, and that sounded like a small fortune to me. 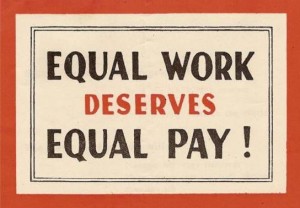 For the first few months I walked around calculating in my head how much each dollar was worth in Bolivian money: $1 was equal to 5 pesos bolivianos, which meant 25 pesos bolivianos an hour! But while I was excited we were making that much, we also began to have to pay just as much, and more, for our basic needs.

Soon after, we had to rent our own apartment, which ended up costing about 60 percent of my mom’s monthly earnings. This meant we had to find roommates for a one-bedroom apartment (yes, I see why that is an oxymoron but that is a topic for another column) in order to afford it and have enough to pay for food, clothing, gas, etc. It didn’t take too long to realize that the money my mom made didn’t go very far.

Luckily for us, our family was only two and we were both very healthy. My mom didn’t have to provide for multiple kids, nor did we have any health-related issues. But in retrospect I can’t imagine how she managed and how today low-income single moms provide for their children.

I didn’t have to face similar hardships when I entered adulthood and had my own kids. I was extremely fortunate to go to college and today, I definitely earn much more than the $5 per hour my mom used to make.

Education does not close the gap, either: Latinas with a college degree make about $31,000 less than white men with the same degree, which is widest gap among all racial groups.

Why does this matter? Well, for one because families depend on a woman’s salary to make ends meet. Women across the country are working to support their families, and Latinas are no exception. According to the 2010 Census, 59 percent of Latina women participate in the nation’s workforce, and they are the sole breadwinners for 25 percent of Hispanic families. Their earnings are critical for their family’s financial stability, particularly after the devastating impact of the Great Recession.

A woman’s lack of pay also lowers her earnings over her lifetime and reduces her long-term assets. According to research by my Center for American Progress colleague Heather Boushey, a typical woman loses $431,000 in pay over a 40-year career.

My mom is now in retirement age and struggling with the fact that she does not have enough assets to cover her long-term needs. For her, as well as for those of us who work just as hard in all types of jobs, we need more from our employers and elected officials to ensure that women get equal pay for equal work.

Vanessa Cárdenas is Director for Progress 2050 at the Center for American Progress.