I have been an activist for over fifty years so I can safely say that I have participated in my share of controversies. I remember some that were particularly acrimonious. When I first joined the faculty at San Fernando State College (now California State University at Northridge) a white member of the faculty remarked that now that a Mexican was on staff there would be flies in the faculty cafeteria. 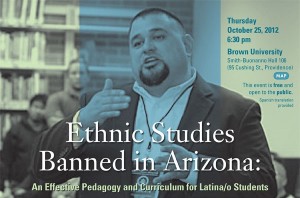 As uncomfortable as this incident, and those that followed were, I can say with certainty that I have never disliked anyone as much as I have the political and educational establishment in Arizona.

But you know what, we as a community should accept some of the blame. We in California have not done a very good job of working with Tucson and other smaller communities that are extremely vulnerable to xenophobia.

As I have mentioned, the pace there is slower, and there is not the kind of veteran leadership needed to fend off irrational assaults on the civil and human rights. Places like Los Angeles move at a faster pace, and gutter politics are taken for granted, and you learn over time not to get too cynical.

In establishing Chicana/o Studies I encountered racists such as the jerk that made the comment about the flies. However, I found support from unlikely sources. One top ranking administrator told me bluntly that he did not believe in Chicano Studies but it was his job to help me, which he did. As much as anyone, he deserves credit for our success. The administrator was ultraconservative and a Republican at that. But he was a professional.

In Arizona, I have not found many professional educators on the other side. They always seem to be parroting political biases rather than weighing what is good pedagogy and what benefits students.

In this environment I have become very cynical – much too much so. I did not consider that professional pride often trumps bad politics, and for as bad as things are, Arizona is not the belly button of the earth.

When the court appointed a Special Master I was wary. I assumed that Dr. Willis Hawley would do what was expedient and come up with a plan that would placate Superintendent John Pedicone and the Tucson School District Governing Board. It is obvious from the record that the chair, Mark Stegeman, ran the board and that he had an intense dislike of the Mexican American program. I did not distinguish between the two – – the truth be told, Hawley is a professional and Stegeman is a political hack.

I should have known better. Hawley’s professional career is lit up with achievements. Hawley is a professional, and just because he knew little about Mexican American students, it did not mean he would not act professionally.

I apologize for these assumptions, they were not fair. I should have known better. Moreover, Hawley is not from Arizona and he does not share its colonial or provincial mentality. More so I should have been alerted by the Cambium Report (2011) that there were exceptions.

The Arizona Superintendent of Instruction John Huppenthal ordered the Cambium study that cost the taxpayers at least $112,000 (initial reports say $170,000). According to Huppenthal, the report was supposed to prove that the TUSD Mexican American Studies (MAS) program was un-American, racist, promoted the overthrow of the government and was ineffective. Most of us feared the worse because the study was commissioned by Huppenthal and his obsessed predecessor Attorney General Tom Horne.

When the report finally came back in May 2011, a columnist for the Phoenix Times wrote, “I’ve just finished reading the Cambium report on Tucson Unified School District’s much-maligned Mexican American Studies Department. It’s a shocker.”

There was no evidence that “any classroom within Tucson Unified School District is in direct violation of the law [Arizona Revised Statutes] 15-112(A).” Cambiun contradicted Huppenthal’s claim that it violated HB 2281. The classes did not promote resentment toward “a certain race or class.” The reading materials were also appropriate.

According to the Cambium Report students taking MAS classes were more likely to pass reading and writing portions of the standardized tests. “Consequently, high school seniors enrolled in a MAS course are more likely to graduate than their peers.” The study praised the program.

It recommended keeping the MAS classes as “core courses.” In all, the report was 120 pages. But the media almost totally ignored the Cambium findings. Instead, it relied on the spins of Huppenthal and other elected officials.

In short, the media was too lazy to read the report.

Huppenthal, with no evidence whatsoever, said that he believed the courses caused “unhealthy segregation” – this is the height of mendacity. The truth be told, Arizona and Tucson have been under a court order to desegregate for almost 40 years, and as a matter of record it is promoting charter schools as a means of circumventing the law.

I can only assume that the TUSD cabal did not read the Cambium Report. Even after Cambium, under the leadership of Superintendent John Pedicone, Board President Stegemen and tea party zealot Michael Hicks, the TUSD cabal moved to destroy the program and ban the books. Books that Huppenthal and Horne before him had ordered censored. Indeed, the TUSD board abetted Huppenthal and did not challenge him or addressed Cambium.

Hawley moved slowly and his report just came out this month. As part of his investigation, he commissioned a study authored by University of Arizona Professors of Education — Nolan L. Cabrera, Jeffrey F. Milam, and Ronald W. Marx. The charge was to measure the relationship between MAS courses over a prolonged period of time. Using AIMS test results, graduation rates, and those going to college, the results were quantified.

It went on “MAS participation was a significant, positive predictor for three of the four cohorts (2008, 2009, and 2010; see Table 3). Students who took MAS courses were between 51 percent more likely to graduate from high school than non-MAS students (2009) and 108 percent more likely to graduate (2008).” It concluded that “Returning to the three hypotheses that drove these analyses, no empirical evidence indicated that MAS participation adversely affected student achievement. Moreover, there is sufficient empirical evidence in analyses of two of the three outcomes (AIMS passing and graduation) to reject the null hypothesis (i.e., there is no significant relationship).”

Based on Hawley’s final report federal, Judge David Bury issued a Court Order. As to Latino and African American students the court ordered that ”core” curriculum courses be offered at all high schools starting in the 2012-14 school year. Pilot programs would be initiated in grades 6 thru 8 in 2014-15 and in in 2012-16 they would be offered in K-12. The report does not mention MAS by name but its intent is clear to any educator or professional. It used the term “culturally relevant” courses.

The ink was not dry on the order when the TUSD filed objections to it. It employed a high powered firm with political connections. It is the law firm of former Democratic U.S. Senator Dennis DeConcini who is politically connected and has friends on both sides of the aisle.

The former senator is described as “scandal-plagued.” He was called before the Senate ethics committee in the mid-80s as part of the Charles Keating scandal. Upon his retirement from the Senate, he became a lobbyist, and he was again accused of violating the code of ethics because he allegedly gave improper gifts to legislators.

Once more, the TUSD Board is taking the low ground, avoiding court orders by miring them in court proceedings and spinning them, playing to the xenophobes. According to one source, “The 84-page plan focuses on balancing the racial makeup of schools, improving the hiring and retention of minority employees and improving educational opportunities for black and Hispanic students.” It is detailed and comprehensive but it has to be read before you can understand it.

At issue are the reinstatement of the MAS program and the return of its coordinator Sean Arce. As in the case of the Cambium Report, mendacity trumps good education. Stegeman says that he is concerned because the plan considers ethnicity. That is untruthful and illogical. The order is a desegregation plan, doh! Amazingly he added, “I’m not sure if the court trusts us.”

To unravel the quagmire, the U.S. Justice Department will be part of the negotiations. Hopefully all parties will read the Cambium Report, the University of Arizona Report and Hawley’s findings. All depends on whether they read the documents and act professionally. It is an affront to all citizens and residents that a high-powered law firm is being used and taxpayers’ money squandered because of the capriciousness of a few ideologues.

The ones that have been hurt the most are the students, the parents, and the MAS teachers who only want a good education for Latino students. The least that so-called leaders can do is read the Cambium and the Cabrera Reports, as well as the Bury Court Order.