Guest Voz: Mi Abuelito — Discovering the depth of my grandfather’s love for family and Nicaragua, his country 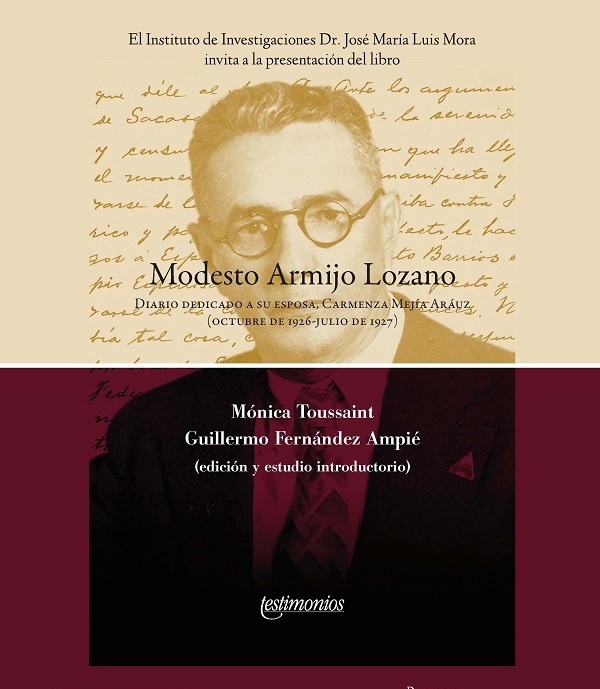 I am the daughter of a woman who emigrated from Nicaragua in the late 1940s, and I feel that I know quite a bit about Nicaraguan history, based on both formal study and family stories. Nicaragua, the second poorest country in the Western Hemisphere, has a long history of civil wars and armed subversions and interventions by the US. To the extent we know much about Nicaraguan history, we may remember the familiar names of Somoza, Sandino, Chamorro and Sacasa from the most recent civil war between the Sandinista and the Contras (1979-1990). The history of Nicaragua is replete with these same surnames. Another name, very familiar in Nicaragua, is that of my grandfather, Modesto Armijo Lozano.

I’ve always been a fan of diaries and biographies as they have a special way of bringing to life the rhythm and context of their time. I anxiously await the book entitled ”MODESTO ARMIJO LOZANO: Diario dedicado a su esposa, Carmenza Mejia Aruaz. This publication is a “hot-off-the-academic-press”.

Drs. Mónica Toussaint and Guillermo Fernández Ampié, analyzed, studied and edited the more than 800 pages of letters written by my grandfather to my grandmother during the 1927 Civil War between the Conservatives and the Liberals. Because he had served as an Undersecretary, during much of that time he was in exile with the Liberal Party cabinet in Guatemala, and my grandmother remained in Nicaragua raising 5 children by herself. My mother, the youngest, would not be born until 1929 during that exile period.

I barely knew my abuelito, Dr. Armijo (1888 – 1968), but I do know very much about him. He is somewhat renowned in Nicaragua, with many honors bestowed upon him.

My mother, the youngest of 6 children, adored him. I recall so many times she shared stories about his courtship with my grandmother, his political career, his education, his wisdom, generosity and love of country and family. His quest for social justice and his character for honesty are legendary. These stories readied me for my first visit to Nicaragua, where I would see many educational institutions bearing his name. It will be interesting to read this new book and compare it to what I have heard my entire life.

After my grandparents became engaged in Jinotega, Nicaragua, he left town. My grandmother never heard back from him, and she waited almost a year, and wondered if she was still engaged. At that time there was a war going on, so communication was difficult, and this was well before telephones became common. Then one day the postman came with about 300 letters for her.

My grandfather had written to her every single day!

I have been told that my grandmother Carmenza put the letters in chronological order and, after putting on a pretty dress, combing her hair and putting on a little lipstick, she sat down and read them all. She was so happy!

We don’t know if she ever wrote to him, she only told her children her side of the story. She would read the children the precious letters, and then store them in a beautiful small Chinese box made of decorated green metal. After she died, nobody could find the letters. We don’t know if she destroyed them, or if my father put them in the coffin with her when she was buried. I loved her story about her love letters.

I can’t recall when I first saw THE MANUSCRIPT, but it seems as if it has always been in a corner of my parent’s garage. I remember my mother starting to type his longhand writings, which was elegant but barely legible, to me anyway. I don’t think she typed more than 20 pages of the 800 pages that it turned out to be. But it would always turn up during my visits to my mother, we’d have a short conversation about it, and then time moved on.

After my mother died, among the thousands of other pieces of paper, I found a copy of a diary in a small suitcase inside a closet. What was I going to do with it?

I have always been interested in my grandfather’s life, for sure, but not interested enough to do anything about it. At one time I had the brilliant thought about asking each of my Armijo cousins to transcribe 50-100 pages. While we may all speak Spanish, it would have been a major task to pull it all together during our lifetimes. Knowing that everyone is busy, I never got around to posing the question.

Not too long ago, I finally suggested the idea to my uncle. They told me how some historians, friends of one of my cousins, were working on getting the memoirs published. So, that day has come, and I am thrilled and proud to be part of the Armijo family. I can’t wait to learn more about Nicaragua from a firsthand account.

(Editor’s Note: The author and many of her family traveled the first week of March to attend celebratory book events in both Mexico City and Managua, Nicaragua.)

Carmen Marriot is an attorney and hazardous waste expert based in Tucson, Arizona. She recently completed a Public Voices Fellowship with the The OpEd Project, whose mission is to increase the range of voices we hear in the world.