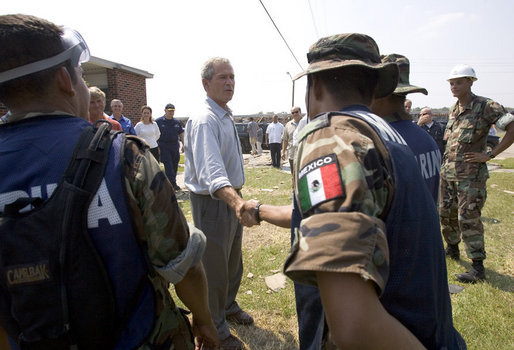 WASHINGTON, D.C. — Violent nature, like a gathering storm, knows no borders. Hurricane Katrina was like that. It made landfall eight years ago, Aug. 23, 2005 over the Bahamas bringing flooding and deaths before crossing the Atlantic as a Category 1 hurricane over southern Florida, then it strengthened over the Gulf of Mexico into a Category 5 cyclone.

Six days later it had weakened to a Category 3 before a second landfall that caused severe destruction due to storm surge along the Gulf coast from central Florida to Texas. When the protection dikes in New Orleans failed, the worst civil engineering disaster in U.S. history resulted. Eighty percent of the city and neighboring parishes went under water for weeks.

The Mexican Red Cross sent a million dollars to match the million dollars the Mexican government sent with 200 tons of food in five Mexican Air Force planes. They also sent four rescue experts to New Orleans from the state of Jalisco and teams of epidemiologists to reduce the risk of infections from mosquitoes.

The next day, the Secretariat of Social Development pledged 200 tons of food arriving in five Mexican Air Force airplanes.

On Sept. 6, the National Defense Secretariat sent 35 vehicles and 163 tons of food and soldiers, with rescue-mission expertise, through Texas to the area affected by Katrina.

On Sept. 7, members of the Federal District (Mexico City) legislature pledged to contribute a day’s pay to the hurricane victims.

On Sept. 25, the 184-person Mexican army contingent completed its 20-day relief mission at Kelly. The Mexican Army’s tractor-trailer field kitchen had served 170,000 meals and assisted in managing and distributing more than 184,000 tons of supplies during the deployment.

On Sept. 26, they packed their equipment, broke camp and folded their flag. The Mexicans ended their mission, and the military caravan began rolling down the southern highway.

Media reports claimed this was the first time the Mexican Army had operated in U.S. territory since the end of the Mexican-American War in 1846, 159 years earlier. Factually this was incorrect. As recently as 60 years before, the Mexican air corps Escuadrón 201 trained in the U.S. during World War II in preparation for the allied invasion of the Philippines in the Pacific theater.

In two instances, now, the imaginary border became less visible to missions of mercy and help.

That’s why it makes no sense that on June 27, 2013, the United States Senate approved legislation to spend $38 billion against an imagined enemy at the border and proposed to erect more barriers and to militarize more agents against a people who help us.

José de la Isla, a nationally syndicated columnist for Hispanic Link and Scripps Howard news services, has been recognized for two consecutive years for his commentaries by New America Media. His forthcoming book is “Our Man on the Ground.” Previous books include “DAY NIGHT LIFE DEATH HOPE” (2009) and “The Rise of Hispanic Political Power” (2004).