By Amalia Deloney
The Center for Media Justice 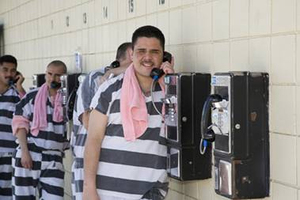 The event included a welcome by FCC Chairman Julius Genachowski and introductory remarks by former FCC Commissioner and NHMC board member Gloria Tristani, as well as a roundtable discussion between FCC representatives and leaders of major Latino led and serving organizations—including the Media Action Grassroots Network (MAG-Net).

On the table were a wide range of Media and Telecommunications issues that impact the Latino community: ownership, diversity, affordability and access (to name a few) as they relate to TV, Radio and the wired and wireless Internet.

Also on the table was the issue of Prison Phone Calls—in fact, Alex Nogales mentioned it in his opening remarks

Some at the Commission have made strong statements about the exorbitant, predatory rates that phone companies charge the families of prison inmates for phone calls — an issue that disproportionately impacts many African-American and Latino families that can least afford it—indicating that a positive change may be within reach.

The timing couldn’t have been more perfect. Not only did it frame Prison Phone Calls as a Latino issue, it highlighted the powerful work that grassroots groups across the country have been engaged in.

As many know, MAG-Net—together with Prison Legal News and Working Narratives—leads the national Campaign for Prison Phone Justice. Since 2010, this campaign has mobilized thousands of incarcerated individuals and their families, criminal justice and civil rights advocates, media makers and activists from across the country to lower the lost of calls from prison.

Earlier this year the leaders of Latinos for Internet Freedom passed a resolution at the National Latino Congreso calling for “Phone Justice for Immigrants in Detention.”

And, in the past three months alone, MAG-Net members have conducted in-district visits in CA, NY, WV and MN securing the support of key elected officials of color like Representatives Rush, Ellison, Clarke and Lee. Like us, they understand the burden that our communities bear to remain connected.

Additionally, we recently partnered with Participant Media, a film company that creates specific social action campaigns for their releases, designed to give a voice to issues that resonate in the films.

Participant Media has chosen the film Middle of Nowhere, to support our campaign. This film, which AFFRM will release in U.S. theaters this October, chronicles a woman’s separation from her incarcerated husband, revealing the challenges faced by families in staying connected to loved ones in prison and the effect on both parties.

We also brought Mrs. Martha Wright, her grandson Mr. Ulandis Forte and Mr. Jackie Lucas–three named plaintiffs from Martha Wright vs. Corrections Corporation of America–to the FCC to share their personal stories related to the Wright Petition (Docket 96-128). They were joined by Mrs. Viola Richardson (Lucas) who shared her perspective as a family member – but not a plaintiff – who was directly impacted.

Kleenex was passed around as each of the plaintiffs (now petitioners) spoke. Each of their testimonies was unique, powerful, and deeply moving—and spoke about the sacrifices family members were forced to make, to be able to regularly say, “I love you.”

While phone rates in prisons vary, in several states it costs $15 for a 15-minute collect call. Let’s break this down.

Cricket, for example, offers a $55/month unlimited everything plan for the iPhone–this means folks on the outside can talk as much as they want for $55 a month, while families communicating with someone in prison can talk for 45 minutes for the same price.

Laid out like this, it’s obvious that the cost preys on families’ desires to stay in contact. It’s also a price that guarantees a hefty profit margin for the prison phone companies whose business models thrive off an incarceration nation.

Marginalized by a narrative that hides structural racism, poverty and its relationship to disproportionate confinement, Latino and black communities are unduly affected–left to pay a regressive tax just to “stay together.” Doubt this? Latinos make up 35% of the U.S. prison population and the vast majority of the 400,000 migrants currently in detention centers. Of the 2.7 million children who have one or both parents behind bars—1 in 28 is Latino. Though incarcerated or detained, these individuals all have family, friends, lawyers and case workers who want (or need) to stay in contact with them—and are forced to pay the monopoly rates. Ask yourself now who’s generating the profit margins?

As Latinos we understand the importance of family, it’s far more than just a shared bloodline — it’s a social and communal anchor that helps to define our aspirations, as well as our experiences and needs. Consistent communication is part of how we strengthen our family, and by extension our community as a whole. When this open communication is threatened — or worse yet, commoditized — we all pay the price.

Let me be clear—WE ALL PAY THE PRICE.

The Campaign for Prison Phone Justice offers an opportunity for our community to speak out against this form of corporate abuse. This campaign provides a way for us to ‘knit’ our issues together — to show how reproductive justice, migrant rights, criminal justice, education equity and strong families and strong communities are all impacted by a through line which includes affordable phone calls.

We’re not asking you to set aside your other organizing goals, we’re asking you to link them together with ours. The more connected we are, the more united we become. Take a minute and join our Campaign for Prison Phone Justice and let the FCC know that Latinos care about this issue!

Amalia Deloney is the grassroots policy director at the Center for Media Justice, and a Guatemala-born activist, cultural worker and former Senior Fellow with the Main Street Project.