Should we worry about nuclear weapons? Or are they a good thing to have, to keep us safe? 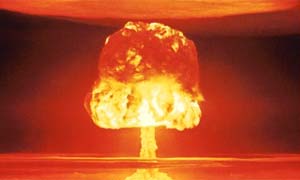 OK, first, nukes are very different from battlefield weapons, like guns and artillery. Conventional weapons “kill you once.” Nukes explode at 10,000⁰ Celsius. They melt everything for miles around, and cause long-term radioactivity, which creates cancer in humans and makes land unfarmable and water undrinkable. Nukes kill for a thousand generations. There are nine countries with nuclear weapons; their governments justify them by a doctrine called deterrence — the theory they’re so powerful they’ll prevent attack.

But let’s test this theory.

For deterrence to work, it must be fail-safe. If not, you risk your own annihilation from an opponent’s attack. In the 1962 Cuban missile crisis, the huge US nuclear arsenal did not keep the Soviet Union from trying to base nuclear missiles in Cuba, just 15 minutes from Washington, New York, and Houston. Only a secret deal to remove US missiles from Turkey, near the Soviet border, ended the stalemate — meantime, many US advisors had recommended pre-emptive attack, which could have set off nuclear Armageddon.

How about the Middle East?

In 1973, Israel, which held Egypt’s Sinai territory, felt invulnerable as the only nuclear power in the region. Yet, Sadat of Egypt, a moderate, attacked, under political pressure at home to recover the Sinai. Finally, in Asia there’s India and Pakistan —neighbors which have gone to war four times since 1947 — each now armed with over 100 nuclear weapons.

What if there’s a fifth such war?

A new medical study states a nuclear war between India and Pakistan would cause a “Nuclear Famine.” So much heat, wind, and debris would rise into the upper atmosphere, that a dark cloud would reach the earth’s jet stream — the global weather that spans the Northern Hemisphere, would keep orbiting, and block out the sun for ten years, making it impossible to grow food in many areas. Many millions would starve, and life as we know it would end. This is a scientific study, from a Nobel-Prize-winning group, Physicians for Social Responsibility.

How to prevent these things?

In the 90’s, we passed the Chemical and Biological Weapons Conventions, treaties which make it illegal to store or use those killer weapons. We need a Nuclear Weapons Convention, which does the same for nukes — the most deadly WMD of all. The Mayor of Hiroshima has proposed a 2105 Global Conference — let’s get started.

What can the next President do?

Two things — cut nukes further than the New START Treaty, which was only a beginning, and get other nuclear countries besides Russia — like China, India, Pakistan, and our own allies Britain, Israel, and France, involved. Engage Iran seriously.

And cut the nuclear budget: Do we really need to “modernize” uranium HEU production? Let’s use the money for the things we need —infrastructure, health, education. And voters? Ask candidates — will you stop nuclear “modernization” and then end nukes?

Ed Aguilar is co-founder of Project for Nuclear Awareness and recently signed on for the Peace Voter Project, in collaboration with the Coalition for Peace Action, a project to help students, Latinos and Latinas, and other minorities to assert their rights to vote, despite voter suppression attempts.