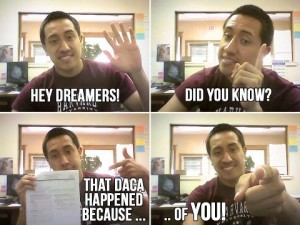 The Obama administration is ostensibly gearing up for comprehensive immigration reform while at the same time acting directly against the interests of immigrants.

The FAQs are put into quotes because there is at least one rule change dressed up as an FAQ.

At first glance, USCIS’s updates seem to support DACA recipients against boogeyman anti-immigrant states like Iowa or Arizona. But on closer examination, there is a rule change that was designed to exclude the number of young immigrants eligible for DACA. Question and answer 1 under the heading Miscellaneous states:

This caught my attention because one of our clients would not be eligible under this new rule change.

When the DACA requirements were first published, one only needed to show that one came to the United States before one’s 16th birthday.

In fact, question 13 on Form I-821D asks: Date of Initial entry into the United States. The form emphasizes the importance of the initial entry, not whether the applicant established residence after that initial entry.

Our client did not establish residence in the U.S. until after reaching her 16th birthday.

Under the rules at the time that our client applied, she qualified and received DACA. Under the new rules, she would not qualify for DACA.

Why did the Obama administration craft a new rule that restricts the amount of young immigrants eligible for DACA? Does Obama want to penalize young immigrants for having been lucky enough to have entered the U.S. for a vacation prior to their 16th birthday?

This new rule makes no sense and is anti-immigrant.

When all of the facts point one way, hope is useless. It is time to turn the other way–to abandon Obama–and find a new avenue for reform.