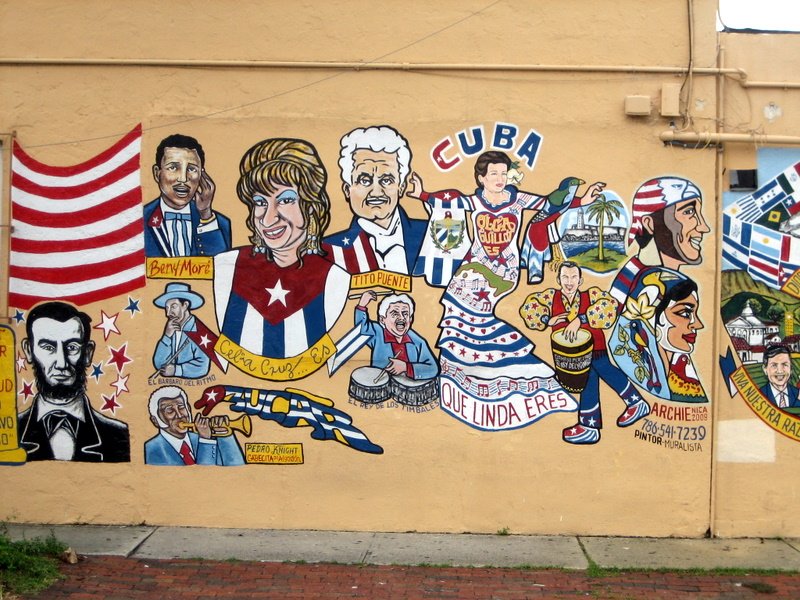 To see my 92 year-old father’s morning face on waking up to news of President Obama’s announcement about U.S.-Cuban relations was to see the future of U.S. politics. “What?” he asked in the crackly, sleepy voice that’s taken on a sadder cadence since my mother María, his partner of 60-plus years, died last year.

“Obama normalizo relations with Cuba?” he again asked as he leaned his arthritis-wracked neck sideward and backwards in disbelief. After confirming on his tablet that U.S. Cuba policy had indeed shifted, Papa Mon looked up, face blossoming, his jowls and honey brown eyes momentarily unleavened of their daily sadness and said, “I’m happy for the Cuban people. This is incredible. I really didn’t think I’d live to see this.”

Both of us were astounded at the little-noticed, first-ever acknowledgement of real neighbor status inherent in Obama’s “Todos Somos Américanos” statement. We knew that a major victory for Latin America and for U.S. Latinos was upon us.

At 92, Papa Mon, remains in the vanguard defining U.S. Latin America policy and Latino politics. Like most of Latin America, the insurgent continent backing Cuba throughout its negotiations with the U.S., my Democrat father has always rejected the bipartisan “Washington Consensus” that brought us the embargo and other failed and often violent Latin America policies.

Like many U.S. Latinos, my father understands from a very personal place that while they are voted on and implemented out of Washington, these utterly failed U.S. Cuba and Latin America policies were, until recently, designed in one of the darkest, dirtiest political corners on the entire political map of the United States: sunny South Florida.

If there’s a Big Loser in yesterday’s announcement, it is right-wing Cuban Miami, which has been left looking anemic and backward to the point where even the pastels of South Beach can’t distract from the reactionary whiteness of their condition.

Consider, for example, how the presidential aspirations of Florida Senator Marco Rubio were and will continue to be devastated at news reports that mention how 63% of Floridians support normalization of relations with Cuba. If he doesn’t even represent his own state, who does Marco Rubio speak for if not the same aging, but powerful loons that once named a Miami street after Orlando Bosch, a convicted terrorist and former CIA operative?

How will Rubio’s rants and policy positions sound anything but extreme to Latinos as relations with Cuba normalize?

As he begins positioning himself beyond for a spot on the national stage in upcoming presidential elections, Rubio (who has backed extremist immigration policies like SB1070, Arizona’s racial profiling law) will likely be welcomed with even louder Latino chants of “¡No Somos Rubios!” heard during his first bid. (Note: “No Somos Rubios” can mean either “We’re Not Rubios” or “We’re Not Blondes”) And what fellow Cuban right winger Ted Cruz hopes to accomplish by loudly trumpeting his well-known reactionary Cuba policies with Latinos doesn’t even merit consideration.

More interesting is the plight of Cuban-American Senator Bob Menendez, whose policy positions on Cuba and Latin America generally are largely indistinguishable from those of Rubio and Cruz. Ironically, Menendez, a Democrat who thru both his stances on immigration and other policies and through his regular appearances on Spanish language media has tried to position himself as a Latino leader of national stature, may end up being be one of the biggest losers of fellow Democrat Obama’s announcement.

Even though 62 percent of Latinos support normalization of US-Cuba relations, Menendez continues to be a vocal critic of any changes in Cuba policy. Increasingly, he will come under even greater pressure from powerful business interests bent on breaking into the “Cuba market.”

Beyond big business, Menendez is also facing greater pressure from another younger but increasingly powerful force in US politics: Mexicans and Mexican Americans.

More than a few have begun noticing how Menendez, the (outgoing) Chairman of the Senate Foreign Relations Committee, has used his bully pulpit to block changes in Cuba policy and castigate Venezuela all the while doing nothing except remain silent about continuing the flow of arms and money to the country Human Rights Watch has called home to the “worst” human rights crisis in all Latin America — Mexico.

As more than a few of the Mexicans that constitute the overwhelming majority of the US Latino electorate become aware of — and active against — the state terrorism of Mexico’s Enrique Peña Nieto’s government, documented by human rights groups, the power of right-wing Cuban Miami will continue its decline and fall, even among Florida’s Cubans, especially the younger Cubans who were also key in breaking the iceberg in sunny South Florida blocking any changes.

As Cuba policy shrinks into a more realistic proportion on the map of U.S. Latino politics, the size of the extreme crisis in Mexico will also grow and occupy its rightful place on the political map. As a result, the three Cuban-American senators will either have to speak to Mexico’s crisis — and the U.S. role in creating it — or face widespread repudiation among U.S. Latinos.

The shift in Cuba policy and the parallel deterioration of the situation in Mexico will inspire intense changes and sentiments here, especially among Mexicans, many of whom will start seeking immigration benefits for immigrants from Mexico, where the situation is apocalyptically bad and deserving of political asylum.

In the face of this situation, continuing policies that benefit immigrants coming from Cuba, while doing nothing but deport, jail and even kill (i.e., Border Patrol shootings) current and future Mexican migrants fleeing extreme situations will look untenable, sound immoral and feel inhumane.

Though President Obama’s announcement does not end the wrongheaded U.S. blockade of Cuba, it still represents a major shift in both U.S. Latin America policy and in U.S. Latino politics. In addition, the weakening of the right-wing Cuban grip on Latin America and U.S. Latino politics is to be celebrated — and defended, something even my 92 year-old father Ramón says he’ll do with what right-wing Cuban singer Gloria Estefan sang of in a sweet song he and I really like when we remember and look forward, “Con los años que me quedan” (“With the Years I Have Left”).