Latina Lista: News from the Latinx perspective > Columns & Features > Guest Voz > Guest Voz: Poverty and the perception of poverty – how both matter for schooling outcomes

Guest Voz: Poverty and the perception of poverty – how both matter for schooling outcomes 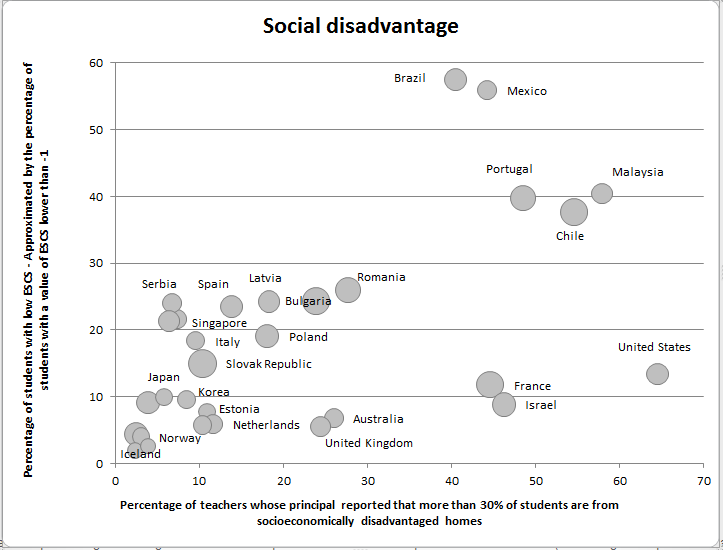 Compensating for students’ socio-economic disadvantage is one of the greatest challenges facing teachers,school leaders and education systems as a whole. However, data from PISA show that some countries are much better at this than others.

Consider the featured photo. The horizontal axis shows the percentage of lower secondary teachers who work in schools where their principal reported that more than 30% of students in their school were from disadvantaged homes. The vertical axis shows the actual percentage of 15-year-old students from disadvantaged homes, measured by PISA’s internationally standardized index that summarizes various indicators of socio-economic disadvantage, including parents’ income and education level, educational resources at home, and other family possessions.

Brazil, Chile, Malaysia, Mexico and Portugal are found in the upper right corner of the chart because their schools have a large share of disadvantaged children and that aligns with the reports of principals. The lower left corner includes the Czech Republic, Denmark, Finland, Iceland, Japan, Korea and Norway where disadvantage in schools is limited, and fewer than one in ten principals reports significant disadvantage.

These are the results one would expect.

Obviously, a child considered poor in the United States may be regarded as relatively wealthy in another country, but the fact that the perceived problem of socio-economic disadvantage among students is so much greater in the United States – and in France too – than the actual backgrounds of students also suggests that what school principals in some countries consider to be social disadvantage would not be considered such in others.

And there is a third important dimension, namely the actual impact of disadvantage on learning outcomes, which is shown by the size of the circles in the chart.

That impact reflects whether an education system provides equitable learning opportunities. In countries like Finland, Iceland and Norway, one would expect this impact to be small because these countries have very little socio-economic disadvantage in their student populations.

Achieving equity in school is easy when society distributes wealth and family education equitably. But the more impressive examples are countries like PISA top-performer Singapore, where disadvantage is significant, but its impact on learning outcomes is only moderate.

These countries seem very good at nurturing the extraordinary talents of ordinary students and at ensuring that every student benefits from excellent teaching.

In contrast, France has a comparatively small share of disadvantaged students, but school principals perceive this share to be large, and student learning outcomes are closely related to social background – more closely, in fact, than in any other country except Chile and the Slovak Republic. More generally, the results show that principals’ perception of disadvantage correlates with inequalities in education opportunities more strongly than real disadvantage does.

There is another way of looking at this: In Korea and Singapore, more than one in two students from the bottom quarter of the socio-economic spectrum score among the most proficient quarter of the world’s students on PISA; in Japan, 45% of disadvantaged students are similarly “resilient” and perform better on the PISA test than their backgrounds would predict. By contrast, in France and the United States, only around 20% of students are resilient, and in Israel, just one in 10 is.

So what does all this mean?

Andreas Schleicher is director of Education and Skills at the Organization for Economic Co-operation and Development (OECD) based in Paris, France.