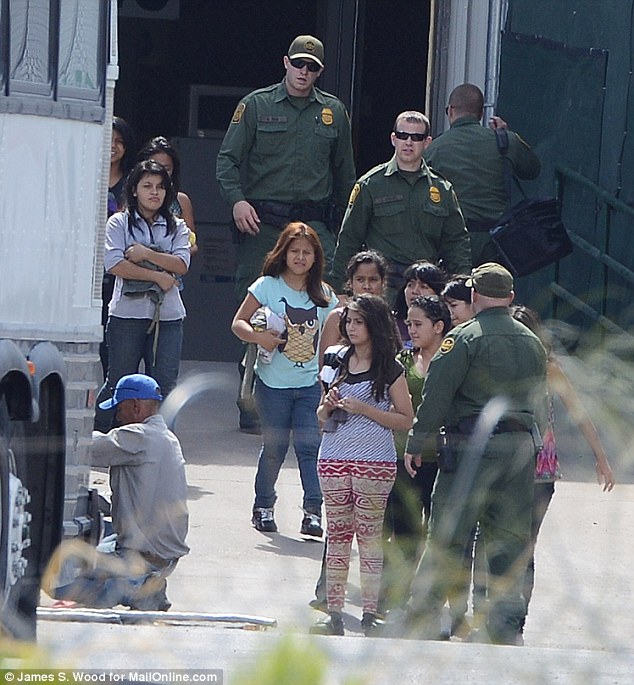 LatinaLista Editor’s Note: Fr. Sean Carroll is the executive director of the Nogales, AZ-based Kino Border Initiative, a binational apostolic initiative and migration advocacy organization with offices in both Nogales, Arizona and Nogales, Sonora, Mexico. This week, Fr. Sean was invited to tour the Nogales Border Patrol station where some of the thousands of Central American migrant children overwhelming Texas’ Rio Grande Valley were flown to relieve the overcrowding at Texas facilities.

In the following account, Fr. Sean shares his impressions and what he was told by U.S. authorities in charge of caring for the children.

As many of you are aware, a high number of migrant children, mostly from Honduras, El Salvador and Guatemala, have been crossing the U.S.-Mexico border recently into South Texas. They flee violence and extreme poverty in their countries of origin, and many seek to be reunified with their parents in the United States.

Last Thursday, June 5, I found out that some of these children were being transported from South Texas to Arizona by plane, and then taken by bus to the U.S. Border Patrol Station in Nogales, Arizona. This decision was made due to the high number of children being detained and a lack of space to receive them.

On the same day, I spoke twice by phone with a Border Patrol representative and asked for permission to visit, to assess the needs of the children. At that time, I was not allowed to have access to the children.

I have had a number of conversations with Rev. David Myers, Senior Adviser to FEMA (the Federal Emergency Management Agency) to request a plan to outline the needs of the children and a process to solicit and receive donations. While I have been promised that the plan is forthcoming, I still have not received it as of today.

On Tuesday, June 10, I attended a meeting with representatives of the Santa Cruz County Emergency Management team, to discuss the situation and to strategize ways to help.

Yesterday, Wednesday, June 11, I was granted permission to visit the U.S. Border Patrol Station, along with local and federal government representatives. We were given a briefing and were able to tour the place where the children are staying, though we were not able to speak with the children.

However, we were able to see some of the young people going to lunch. Most are teenagers but there are a smaller number of younger children. Based on the way they looked and on the facilities that had been set up, their physical needs seem to be met. Their psychological and spiritual well-being is less clear to me, due to the inability to speak and interact with the young people.

It looks like migrant children will continue to arrive in Nogales in the foreseeable future. The KBI remains very committed to collaborating with other churches and organizations to address the needs of these children. We will keep urging the federal government to work with us to provide direction and focus, so we offer assistance in the most effective way possible.

I continue to be grateful for your prayers and generous support of the KBI.

We were first briefed by Mr. George Allen, a representative of the U.S. Border Patrol. He made the following points:

· The Office of Refugee Resettlement has been overwhelmed by the number of migrant children crossing into South Texas from Mexico, and has not had adequate space to receive and process so many young people.

· The decision was made to transport children by plane to Tucson International Airport and then taken by bus to the U.S. Border Patrol Station in Nogales, AZ.

· Food is being provided three times a day with snacks in between. A dining hall has been set up where the children can eat.

· The children range in age from three to seventeen.

· They can offer showers to sixty children at one time.

· A play area is being set up in the parking lot for the children.

· Public health services are available, which include a health screening, vaccinations and blood tests.

· The consuls from the respective countries have access. Most of the children are from Honduras and El Salvador.

· At the moment, they have 1,100 children. Seventy-eight children were transferred yesterday.

· The children currently sleep on plastic cots, but 2,000 correctional mattresses have been ordered and will be delivered today or tomorrow.

During the question and answer period, he made these additional points in response to questions:

· The United States Public Health Service is available to provide counseling to the children.

· Customs and Border Protection Chaplains are coming to accompany the children. They do not appear to want pastoral assistance from the local Nogales community.

· Televisions are being set up, which will be used to show the “What to Expect” video and to explain their rights. They will be able to use the televisions for recreational purposes as well.

· No plan exists at the moment to engage the local community in providing assistance to the children, though we were told that the plan would be forthcoming. It is likely that the Red Cross will play a role.

We then walked over to the area where the children are staying. It is a very large warehouse building and part of it is used for the children. In the parking lot, two tents have been set up where the play/recreational area will be located.

One large truck was outside the warehouse, which was being used to wash clothing. At least one truck was there containing showers and there were two trucks with toilets and sinks (we could not go inside to see for ourselves). However, sometime after we entered the warehouse, a group of young girls were escorted in from outside, and it was clear that they had bathed.

The inside of the warehouse had an adequately cool temperature. To the left as we entered was the area that had been set up for vaccinations and other health services. There were a line of refrigerators and freezers, presumably for vaccines and other supplies. An area nearby had also been designated to keep the children’s belongings in large plastic bags. Also, a number of phones were visible and were being used. They were available so the children can speak to consular officials and to their families.

We arrived at lunchtime, so groups of 200 children at a time walked in a single line to receive their food and then to eat in the designated area. Physically, most looked like they were in good condition, adequately clothed and were having their basic needs met. At the same time, we were not allowed to speak with them, so it was difficult to assess how they were doing psychologically and spiritually.

The next step is to keep communicating with FEMA (the Federal Emergency Management Agency) to develop and implement a plan that clarifies the children’s needs and provides people the opportunity to respond to them. Once we have some direction, then we will make that information available on our web site and on our Facebook page. We will send out an e-mail blast as well.

I know this report does not answer all the questions, but hopefully it gives a clearer sense of the overall condition of the children and of the place where they are staying at the moment.

Thanks so much for all your generous offers of support. We are so grateful.

Caring for thousands of children crossing illegally into the U.S. to cost $868 million in 2014
1 Comment
Today's Crowdfunding Campaign: Help jaraneros and bombers get to Veracruz to learn with elders from the son jarocho tradition