Guest Voz: Race and Beyond: Why Young, Minority, and Low-Income Citizens Don’t Vote 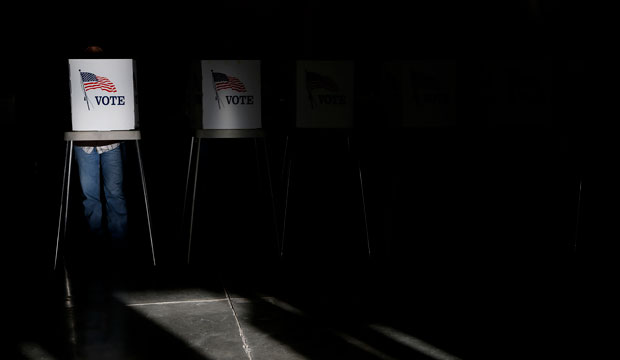 On Tuesday, voters across the United States cast their ballots in the 2014 midterm elections. As with any election, there are winners and losers.
But, dear reader, this column offers neither post-election analysis nor after-the-fact second-guessing – well, at least, not in the well-worn, traditional sense.

Instead, I want to use the occasion of Election Day to share an insight into the sad fundamentals of electoral democracy. Regardless of whether a favored candidate won or a popular ballot initiative passed, our nation suffered because of the number of people who didn’t vote at all.

In a study released last week — just four days before the midterm elections — the Pew Research Center for the People & the Press predicted that 6 in 10 voting-age adults would not show up at the polls on Election Day.

What’s more, the study found that those who were most unlikely to vote are demographically distinct from likely voters:

Drew DeSilver, a senior writer at the Pew Research Center, noted in a separate report issued earlier this year that voter turnout regularly drops in midterm elections and has done so like clockwork since the 1840s.

“In 2008, for instance, 57.1% of the voting-age population cast ballots — the highest level in four decades — as Barack Obama became the first African American elected president,” he wrote in a July blog post. “But two years later only 36.9% voted in the midterm election that put the House back in Republican hands. For Obama’s re-election in 2012, turnout rebounded to 53.7%.”

Political scientists — such as James E. Campbell of the University of Georgia and Brian G. Knight at Brown University — have varied theories about why some potential voters do not trouble themselves to vote, especially in off-year or nonresidential elections.

In a 1987 scholarly article published in the American Journal of Political Science, Campbell suggested that midterm elections lack a “wow” factor and that generally only political partisans bother to vote. For his part, Knight argues in a paper published earlier this year by the National Bureau of Economic Research that voters essentially become tired of the sitting president and express their displeasure by voting for the competing party in midterms, a phenomenon that is especially acute in the second term of an administration.

That certainly seemed to be the case in this midterm election.

Say what you will about President Barack Obama’s political skills or acumen in the White House, but as a candidate in 2008 and 2012, he encouraged remarkable turnout among unlikely voters, especially those who are young, minority, and poor. That was because voting is an expression of hope, a belief that a citizen’s input into the system will yield social dividends.

As a New York Times video documents, without hope, citizens doubt anything they say or do will change the world for their benefit. Or viewing it from another perspective, politicians rarely offer disillusioned citizens reasons for optimism. Lacking hope, those voters don’t show up at the polls because they believe nothing politicians say or do makes life better for them.

As far as political theories go, Campbell’s and Knight’s ideas are as good as any. But having observed the political process for quite some time, I have a theory of my own design. I call it the “reflex of rational nonvoting behavior.”

Civic engagement — best exemplified by voting — depends upon an engaged and informed citizenry. But in America, it’s hard to be a good citizen if you’re poor, ignored, or vilified.

Life is just too hard to worry about lofty issues such as public policies and partisan political intrigue. Indeed, among too many poor and minority Americans, voting and choosing elected officials just isn’t viewed as essential to their lives.

This tends to come as something of a shock to happy, well-fed, and middle-class or affluent voters, who have a justified belief that the political process works to their benefit. Politicians covet these voters because their confidence in the process makes them more likely to support candidates and head to the polls on Election Day.

But that’s just one more illustration of the wide gulf between the haves and have-nots in our society.

An example unrelated to voting trends helps drive home this point: A team of social scientists at the University of Buffalo School of Medicine and Biomedical Sciences recently discovered considerable differences in the solid foods that babies from different social classes consumed. As reported in The Washington Post, the researchers discovered that “Specifically, diets high in sugar and fat were found to be associated with less educated mothers and poorer households, while diets that more closely followed infant feeding guidelines were linked to higher education and bigger bank accounts.”

The newspaper report makes clear this problem extends beyond personal choices and food preferences: “The tentacles of income inequality find their way into many different aspects of life, and food is a particularly apt example,” the article stated. “Food inequality, whereby America’s wealthiest people eat well, while the country’s poorest eat, well, poorly, is not only real, but worsening.”

Just as eating habits are determined by wealth, so too are political knowledge and awareness. I would argue this is by design, not by accident.

To be sure, when politicians talk, it’s generally not to poor people. As my colleague Claire Markham, the Outreach Manager for the Faith and Progressive Policy Initiative at the Center for American Progress, pointed out in a recent TalkPoverty.org blog post, conservative members of the House Budget Committee held a series of five hearings on poverty this summer but invited only one working-poor person to address their august body.

“Seventeen experts on poverty and, among them, only one poor person,” Markham wrote, noting the conservative House members didn’t want to hear from a working-poor person. “They came to preach what they think they already know about people in poverty.”

Of course, our nation’s political leaders could — and should — do better to encourage all citizens to participate in voting. Sadly, that’s rarely the case, as political expediency and efficient strategy demand that politicians seek out and mobilize only those voters who support their platforms.

When politicians do discuss the issues that matter to low-income voters, such as minimum-wage increases, it is often only in the context of how those issues affect their existing political supporters. The hell with anyone who disagrees or holds competing political objectives, which is often the case with poor and minority Americans.

Writing for The Root, Danielle C. Belton addressed the conundrum of political nonparticipation among the people who most need representation.

Indeed, this election cycle saw several barriers to voting, including long waits, strict ID laws, and the potential for increased use of provisional ballots among minorities. Belton concludes that if voting were easier and more egalitarian, politicians would “suddenly have more citizens to answer to — citizens who want different things and can’t be ignored.”

Little wonder that these voters, the ones who have been rebuked and scorned, are the ones who tune out when politicians speak. Viewed from this perspective, it’s an unfortunate and rational reflex for those who have been excluded from the national conversation to avoid trying to elbow their way into a voting booth on Election Day.

Featured Photo: Voting booths are illuminated by sunlight as voters cast their ballots at a polling place in Billings, Montana.

Sam Fulwood III is a Senior Fellow at the Center for American Progress and Director of the CAP Leadership Institute. His work with the Center’s Progress 2050 project examines the impact of policies on the nation when there will be no clear racial or ethnic majority by the year 2050.