Guest Voz: Regardless of citizenship status, immigrants make positive contributions to the country 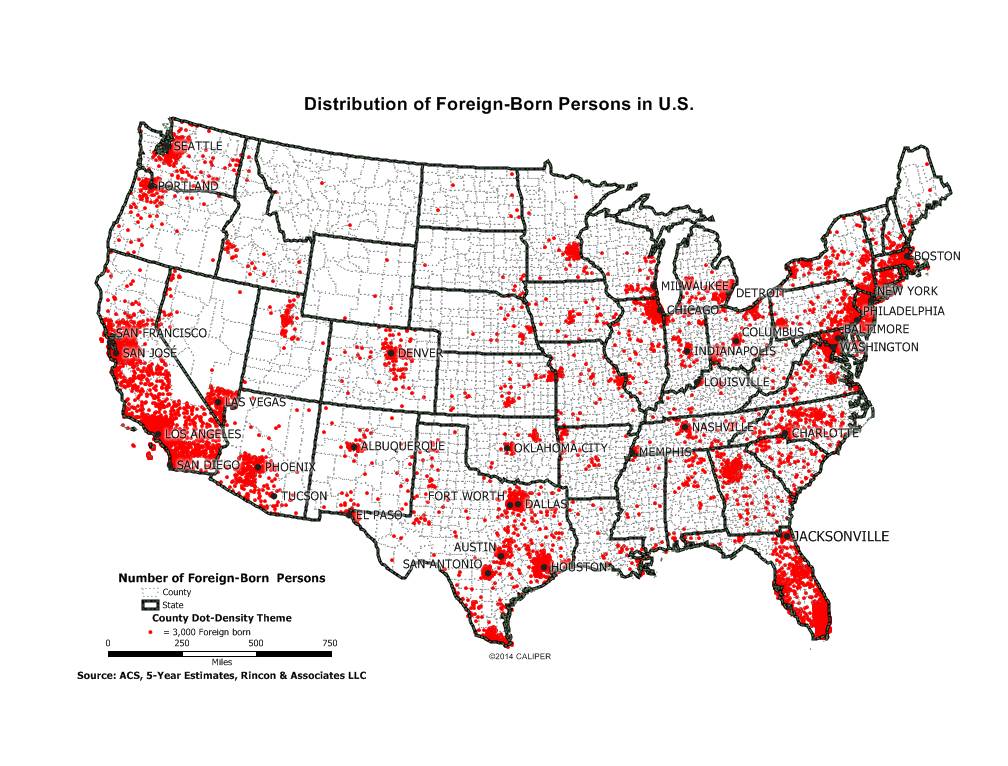 We produced the attached map and assembled the following facts (source: American Community Survey 5-year estimates covering 2008-2012) to provide some balance to the wave of bad news surrounding immigrants.

While it does not directly address the issue of the children that have arrived in the U.S. for refuge, it nonetheless helps to remind everyone about the positive contributions made by immigrants to this country – whether they are documented or not.

Immigrants in America: Some Interesting Facts

Immigrants are concentrated in selected areas of the U.S. and positive assets to these communities.

Texas is one of the top destinations for immigrants. The immigrant population in Texas rose from 9% in 1990 to 16.4% in 2012.
Latin America, especially Mexico, is the primary source of Texas immigrants. In 2012, Texas included 4.3 million foreign born persons, comprising 16.4 percent of Texas’ 26 million. Most of the foreign-born persons came to Texas from Latin America (71.5%) and Asia (19.4%), while others came from Europe (4.2%), Africa (3.7%), and other countries.
The majority of Hispanic Texans are native born. In 2012, 7 in 10 Hispanic Texans were native born, while 3 in 10 Hispanics were foreign born.
Slightly over one in ten undocumented immigrants resided in Texas. In 2010, an estimated 11.2 million undocumented immigrants resided in the U.S., while 1.6 million resided in Texas. By comparison, California was home to an estimated 2.5 million undocumented immigrants.
Hispanics do vote, although at lower rates than other groups. In the 2012 presidential election, 11.2 million Latinos cast votes. Interestingly, voter turnout rates were higher for Latinos who were foreign-born naturalized citizens (54%) than native born Latinos (48%). Although the Latino voter turnout rate of 48 percent was decidedly lower than white (64%) and black (67%) turnout rates, it was comparable to the Asian (47%)turnout rate.

Non-citizens have historically served an important mission in defense of the U.S. In 2010, 16,500 non-citizens served in the U.S. armed forces, representing 1.4% of the enlisted force. According to the Department of Defense, non-citizen recruits are likely to possess language and cultural skills that are of strategic importance to military operations outside of the U.S. Immigrants are an important recruitment source given declining fertility rates in the U.S., and generally have a stronger attachment to serving the United States.
Immigrants have generated substantial economic growth in the U.S. Immigrants started 28% of U.S. businesses in 2011; immigrant businesses have employed 1 in every 10 American workers in privately owned companies; and immigrant business owners contributed more than $775 billion in revenues to the U.S. annual Gross Domestic Product.
Undocumented immigrants in Texas boosted state revenue by more than they cost the state in education, health and other expenses. According to an analysis by the State Comptroller: “The absence of the estimated 1.4 million undocumented immigrants in Texas in fiscal 2005 would have been a loss to our gross state product of $17.7 billion. Undocumented immigrants produced $1.58 billion in state revenues, which exceeded the $1.16 billion in state services they received.”

Edward T. Rincón, Ph.D. is a research psychologist with Dallas, TX-based Rincón & Associates LLC, a research firm that specializes in studies of U.S. multicultural populations. His research interests have focused on the biases associated with high-stakes measurement systems. He may be contacted at edward@rinconassoc.com