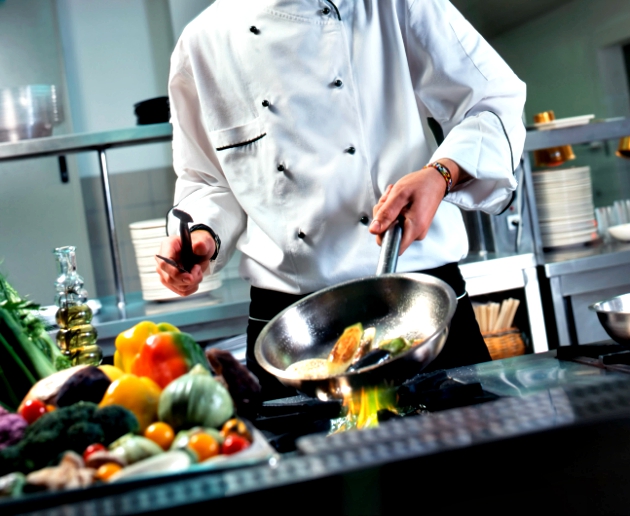 Puerto Ricans – and Hispanics generally – are passionate about food. We have a famous saying: “Where one eats, 10 do”.  We always make more than enough food, just in case someone comes along. As I’ve quickly learned since moving to Atlanta to become the Corporate Executive Chef for Schlotzsky’s (FOCUS Brands), Southerners also appreciate that a good meal is about more than taste and sustenance: it brings people together.

As we celebrate Hispanic cultures and their contributions to America this month, I’m especially appreciative of how my chosen profession in the restaurant and culinary industry, has been influenced by our cultures and offers pathways to leadership for Latinos across the country.

The other important lesson I learned growing up in Puerto Rico was the value of hard work. My mom and dad worked incredibly hard; my dad was a CPA and my mom had the first full-service spa on the Island, where she worked until late at night, to give me and my brothers and sisters a good life. I have carried that work ethic with me to culinary school at Johnson & Wales and throughout my career. I’m proud to be part of an industry that is encouraging, that constantly pushes each other to outdo themselves, and rewards hard work with a higher quality of life.

I’m proud of my heritage, I’m proud of the diversity of this industry, and I’m proud to have joined a company in FOCUS that celebrates and appreciates diversity. And, as a mother of a four-year-old daughter, I’m proud to pass these lessons along to her, along with, of course, a passion for cooking.

Over the course of my career, I have worked in a number of different roles in culinary arts – from recipe developer and cookbook author, to chef on TV (Telemundo, Univision PR, culinary professor), to restaurant owner and Executive Chef. I’ve been lucky to be featured in numerous television shows in the U.S., Puerto Rico and throughout Latin America, including The Travel Channel’s “Bizarre Foods” and Telemundo Network’s “Levántate”, among others.

While I haven’t always embraced my Hispanic heritage, I have come to learn that being different is something to be celebrated.

I am proud to work in an industry that embraces us for who we are, and for the different experiences we bring to the table. To succeed in the culinary field, you don’t need to look and sound like everyone else – in fact, you need to stand out!  What I love most about this industry is that it will reward you for being yourself, for constantly learning, and for working hard.

That’s what I tell young aspiring chefs whenever I get the chance. If you’re willing to work hard, the restaurant industry can open up doors, and give you one heck of a life.

I’ll never forget a young man named Pedro, who came to my cooking school at the age of 13. His mom didn’t think he wanted to be a chef, but he quickly proved her wrong. He was the first one to get to class every Saturday, and the last one to leave so he could learn more – even staying to help me clean up.

He went to on to graduate from Johnson & Wales, traveled to Spain, work in Chicago at Michelin star restaurants in his early 20s and most recently opened and is co-owner of a restaurant and specialty sausages company in Puerto Rico.

Stories like Pedro’s and mine are not unique – you’ll find them all across the restaurant industry. I’ve been inspired by so many wonderful people in the Hispanic community, and I hope that I’m now able to inspire some with my small contribution to the culinary field and this great country.

Born and raised in Puerto Rico, Chef Maira Isabel Morales worked her way into the prestigious Johnson & Wales culinary school, and has built a culinary career in the U.S., authoring cookbooks, developing recipes, serving as an executive chef at Disney World Golf Courses, and now as the executive Chef at Schlotzsky’s Bakery Café, the international sandwich franchise restaurant chain.