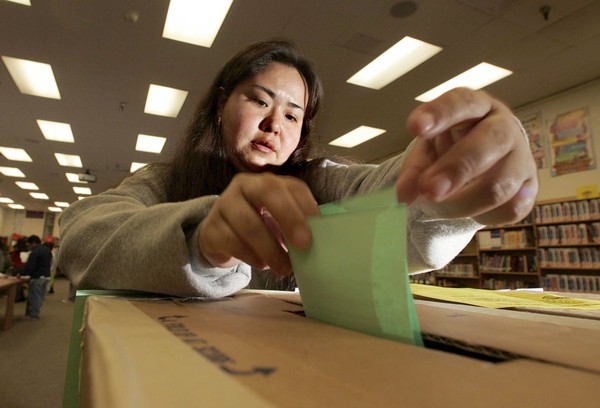 Yet, as the fastest-growing segment of the nation’s largest voting bloc — women — and the most active segment of the emerging majority vote, women of color are a key voting bloc with the power to affect electoral and policy outcomes.

The historically high turnout of women of color was a crucial factor in President Obama winning the women’s vote and the White House in both 2008 and 2012. And this exhibition of political strength is not just reserved for presidential election years when Barack Obama is on the ballot. In 2013, an off-year election, turnout by women of color in Virginia reached virtual presidential levels and helped provide Terry McAuliffe the margin of victory in the gubernatorial election — despite his losing the white women’s vote.

Their impact is even more salient when you look at the state-level data.

The vote-eligible population of Latinas in Arizona has grown almost 70 percent since 2000 and, in every cycle since 2002, they have comprised a larger share of the electorate in midterm elections than in presidential elections — a clear indication of their potential voting strength in local and state elections. Similarly, the vote-eligible population of black women has increased by more than 100,000 voters in both Georgia and North Carolina since 2000, and black women voters in both states are more likely to register and turn out to vote than white women.

Against this backdrop, it’s time we also start asking the question: What will women of color do? If conventional wisdom around voter participation in midterm elections holds, nearly one-third of women of color voters are expected to drop-off in 2014. That represents 5.9 million women of color. Black women, who voted at the highest rate of any voters in 2012—across gender, race, and ethnicity — are projected to have the greatest drop-off among women, at a rate of 34 percent or 3.6 million voters.

In any number of close races around the country, especially in places where women of color are concentrated in large numbers, whether and how women of color show up could make a critical difference in who is elected.

Take for example Georgia, where the projected drop-off rate among black women is 29 percent, or 228,000 voters. A one-point margin in Georgia represents about 29,500 votes. Half of black women voters in North Carolina — or roughly 348,000 voters — are expected to sit out the 2014 election, while the average margin of victory for the state’s past three gubernatorial contests was less than 25,000 votes.

In Arizona, where a one-point margin is about 19,900 votes, almost one-third of Latinas, or 54,000 voters, are expected to stay home this cycle. And in Texas, which has experienced skyrocketing growth in vote-eligible women of color since 2000 — 165.6 percent for Asian women and 62 percent each for black women and Latinas — the projected women-of-color drop-off in 2014 represents more than 730,000 voters, a number that exceeds the population of El Paso, TX.

While significant voter drop-off between presidential elections has come to be a common and even an expected occurrence, recent electoral history demonstrates that it need not be inevitable. But fully unleashing the political power that women of color represent will require understanding who they are, knowing those issues that are most important to them, and identifying how best to inspire them to participate regularly.

So far, this remains an aspiration.

Maya L. Harris is a Senior Fellow at the Center for American Progress and a visiting scholar at Harvard Law School. You can follow her on twitter @mayaharris_.