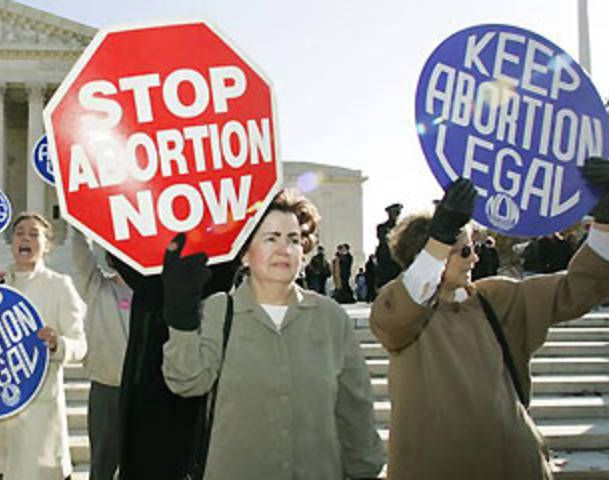 Newton’s third law of motion: For every action there is an equal and opposite reaction. With every victory preserving a woman’s right to choose, we are faced with a defeat. The movement to achieve reproductive justice is experiencing it’s third law now.

In the days before Roe, according to the National Organization for Women, during the 1950s and 60s, each year an estimated 160 to 260 women died from illegal abortions, while thousands more were seriously injured. Despite the gains made since then, many women are still forced to carry unwanted pregnancies or take matters into their own hands.

Congress passed an outrageous ban on abortion care services after twenty weeks. Most women won’t realize they’ve missed a period until 20 weeks! Ohio experienced the most blatant attack on women’s reproductive freedoms on June 28th when Ohio Governor Kasich, signed 5 provisions that ranged from forced ultrasounds to defunding Planned Parenthood clinics into the state budget. This sneaky move by Ohio Republicans was done without any outside perspective, no committee hearings and with disregard to the actual women that will be directly affected by this new “state budget.”

The changing demographic in Texas, which has been predicted to turn Texas from a solid red state into an unpredictable purple state for the 2016 elections, motivated legislators to pass legislation that would close all but 8 abortion care clinics. Eight clinics to serve 13 million women in 268,820 square miles! That’s as good as an all-out abortion ban.

While Texans and supporters across the nation protested and supported Texas State Senator Wendy Davis during her amazing thirteen-hour filibuster to stop this extremely dangerous bill, in 2012, Mississippi did not have the same victory. Their last abortion clinic is on the verge of closing. Alabama is currently enacting the same law.

Where does this leave us now?

In a continual state of defending what is rightly ours, the power to make the decisions that only we can make. Women who cannot afford to have a child will be forced down a dangerous spiral of poverty. Women with dreams and ambitions are being told that their only purpose is to procreate. Some believe that the fetus is more valuable than the woman or the actual, born child. But forcing a woman to carry a pregnancy is not healthy for the woman, the fetus, or the community.

But politics doesn’t have to follow the laws of physics.

This tug of war over women’s bodies keeps us from expanding the rights of those who currently do not have equal access, including low-income and immigrant women. This tug of war tears at our hearts and souls but we will not take this lying down.

We will pull harder.

abortion, state legislation, women's reproductive health
Previous Post Faith Fuels Much of the Heavy Lifting in Honduras
Next PostVideo: Bipartisan panel holds intelligent discussion about the importance of immigration reform for the nation

Faith Fuels Much of the Heavy Lifting in Honduras
1 Comment
Video: Bipartisan panel holds intelligent discussion about the importance of immigration reform for the nation