Latina Lista: News from the Latinx perspective > Columns & Features > Guest Voz > Guest Voz: The “Concrete Ceiling” in politics causes too many Latinas to “lean out” of their ethnicity

Guest Voz: The “Concrete Ceiling” in politics causes too many Latinas to “lean out” of their ethnicity 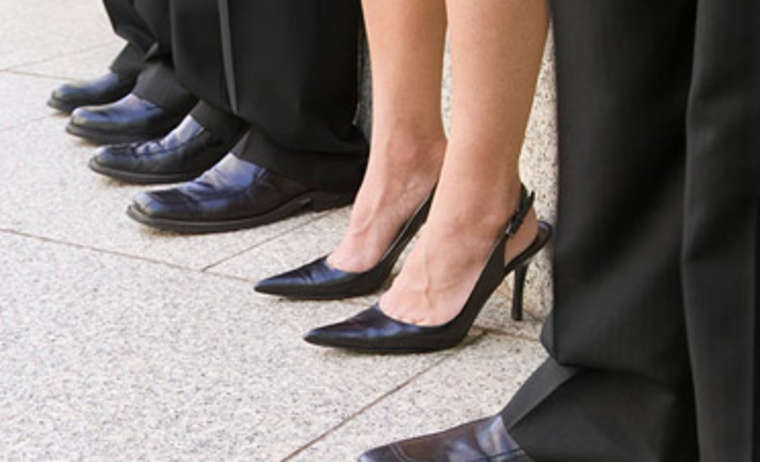 I have spent most of my professional life in the leadership ranks of labor and politics and for most of that time I felt I was the only woman in the room.  I never accepted that feeling and hence made it my job to mentor other women around me, specifically young women, women of color and Latinas, so that whenever an opportunity opened up, there were other women ready to take on leadership roles.

In my new role as a leadership development professional, I identify and train new leaders who understand the importance of diversity in the growth of their unions and organizations.  But it is not just Corporate America and unions who need to think about diversity; the leadership of our political parties must acknowledge that focusing on diversity means identifying women to run for public office, but also hiring and promoting women and people of color to positions of influence in public life.

America is changing and we must change with it or suffer the perils of a monolithic America envisioned by the likes of Donald Trump and Anne Coulter.

Diversity is about having different types of people at the table partaking in the decision-making with men and women as equals.  I have been amazed by the tone of the discussion around both Hillary Clinton and Carly Fiorina running for the presidency of the United States.  They are both qualified professional woman, but the criticism is not about their positions on key critical issues, but about their looks and their err in judgment, as if no men have ever made mistakes and then have had to apologize for them.

If a man apologizes for his political mistakes, he is sincere. If a woman apologizes, she is calculated and a fake.  We have made some strides on the issue of gender equality, but when it comes to professional women in politics, sexism and what we call in Spanish, “machismo,” is still alive and thriving.

Politics in the USA has traditionally being a male driven sport. The U.S. population is 51 percent female, yet their representation in U.S. Congress is only 16.6 percent. Also ethnic minorities are underrepresented at 16.8 percent vs. 35.8 percent of U.S. ethnic population.  The trend for Latina women is even worse. A report by Latinas Represent, shows that Latinas represent just 1% of elected leaders nationwide:

In order to radically change the make-up of our legislators and city executives in the United States, we must of course increase the number of people of color who vote.  However, we must also create a pipeline for qualified women and minorities to be contenders for the top positions in electoral campaigns and in the public sector.

Our political leaders must be held accountable for playing the same game that leads to the same results; the same “old boys network” getting the support to run for office, or promotions and the big jobs.  The fact is that the majority of Hispanics earning college degrees are Latinas; if you open opportunities for them, they will perform beyond your expectations.

Remember that most of the time, Latinas have to work twice as hard to be considered just as good as a white male.

The situation is even worse for women of color. According to Center for Women Policy Studies, 21% of women of color surveyed did not feel they were free to be “themselves at work.” The same study found more than one third of women of color believed that they must “play down” their race or ethnicity to succeed.

You cannot be too black or too Latina, or you risk being labeled “not qualified enough” by your male colleagues, who are in most cases the ones making decisions about promotions and access.

Catalyst, a non-for-profit organization advocating for women in business, called the challenges faced by women of color at work the “concrete ceiling.”  I would argue that the same is true in politics; it is almost impossible to break through the status quo in politics, even when women are highly educated and driven and have the experience to be good executives or legislators.

So the act of “leaning-in” for women of color looks a lot different than for most white women. In addition to having to prove our credentials as professionals, we are also asked play down our identity.

For Latinas, if you are too aggressive, you risk being told “your are not savvy enough” to know how to play the game. If you are too confident in your cultural identity, you are at risk of being told you could not possibly represent the interests of non-Latinos.

Therefore, we live and work at the cross-roads; we want to be proud of our culture but we must constantly prove that we have assimilated, that our education and previous responsibilities alone have prepared us to represent the concerns and problems of all people, of all Americans.  That our “Latinoness” does not makes us less qualified than a white male to serve in public office or to work in the public sector. This is a heavy burden and one that organizations and public entities that want to help Latinas thrive within their ranks must acknowledge and address.

We also must address “sexism” and  “machismo” whenever we hear it and see it.  Our male colleagues have a responsibility here as well; if you have an opportunity to promote someone at the workplace or appoint someone to a higher position, be purposeful about increasing diversity in your pool.  Do not just do the convenient easy thing to select from those already around you with whom you feel comfortable with because they are one of the guys.  Own your own responsibility to bring talented diverse people to the table, not to do the job after you made all the decisions, but to be part of the process.

Being a “team player” to women means not just going along when you see them being discriminated and or left behind for promotions.  It means standing up and doing your part to stop the trend.  Doing anything else is just playing lip service to the idea of diversity.

I am fed up hearing male colleagues, Latinos and non-Latinos, make statements like; “there is just not qualified Latinas out there” or “she is a nice lady but she is not ready yet to run,” or the best one yet, “she is a nice woman, but she needs more training.”  So happens, that 99% of the time, that statement leads to a man being hired for any given job or supported to run for an open seat.

As we celebrate Hispanic Heritage month and the strides that our community have made, I call on my Latino male colleagues, to be purposeful about your leadership practice.  Think about your daughters and granddaughters whom you are working so hard to send to college.  Wouldn’t you want them to be considered as qualified as any other elected official, attorney, doctor or engineer?

And to all our male colleagues, just because we are Latinas and proud of it, doesn’t mean we cannot represent the interests of all Americans. We are not just Latina leaders, Latina elected officials or Latina attorneys. We are leaders who happen to be Latinas. We can as well advocate for a white worker as we can defend a Black or Latino worker.  We can run a large urban city and worked tirelessly and fervently for all the citizens we represent.  We can do all those things because we are capable of living in two worlds and excel at both. And that makes us exceptional.

And to all the Latina professionals out there, let’s support and root for each other at work and in our communities.  Our families are depending on us to “push through” the concrete ceiling and build opportunities for our children.  And together, let’s raise Latino boys who understand that even when they grow up and become professional men, all women are just as talented and as exceptional as their mothers.

The United States would be better for it.

Patricia Campos-Medina is a leadership development professional and labor leader. For more information and to contact her, check out her LinkedIn page.