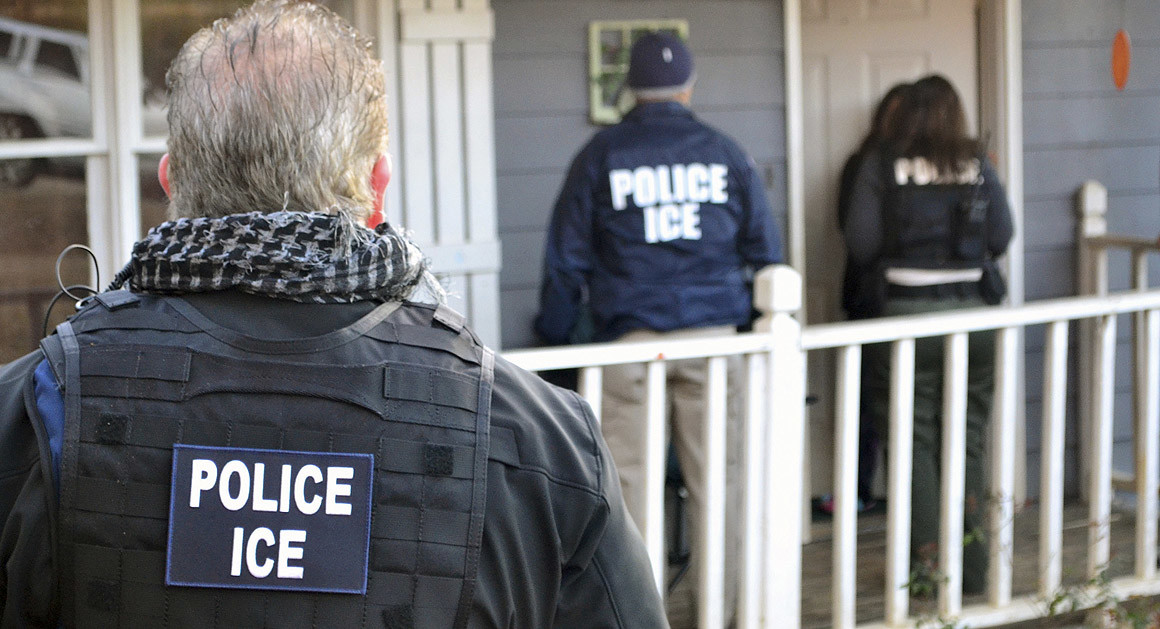 On Jan. 25, five days after taking the oath of office, President Donald Trump issued executive order; “Enhancing Public Safety in the Interior of the United States.” The order expanded the list of deportation priorities to include any noncitizen who is charged with a criminal offense of any kind, or who is suspected of committing criminal acts or being dishonest with immigration officials. The order gives broader leeway to ICE officers in deciding whether someone poses “a risk to public safety.”

On cue, the Immigration and Customs Enforcement agency began a series of sweeps in large metropolitan areas, detaining hundreds of people in Chicago, Los Angeles, New York, Atlanta and other cities.

In a Washington Post article published on Feb. 10, 2017, Gillian Christensen, a spokeswoman for the Department of Homeland Security, which oversees Immigration and Customs Enforcement (ICE), stated that they were part of “routine” immigration enforcement actions. ICE dislikes the term “raids,” and prefers to say authorities are conducting “targeted enforcement actions.”

Nonetheless, these raids created widespread panic within Hispanic communities across the nation. In San Diego county, there were unsubstantiated reports of raids taking place in the North County. Agencies from these areas quickly reported online that there were no raids taking place!

These raids gave way to national fears that this was only the beginning! Raids that would ultimately deport innocent immigrants, rip families apart, and intimidate Hispanics. These raids only serve to reinforce the racial barrier between the Hispanic communities and the majority white communities that continues to scapegoat the migrant community for the countries’ ills.

Trump would later say that he was merely fulfilling his campaign promise! He stated on twitter “The crackdown on illegal criminals is merely the keeping of my campaign promise. Gang members, drug dealers & others are being removed!”

On first blush, there is reason for fear and anxiety, Hispanics are in the crosshairs of ICE agents who are now feeling emboldened, following the leadership of the President. Not only does this allow for the policing agencies to harass and intimidate Hispanics, it frees up the ultra-conservative, xenophobic folks to join in the hunt for “illegals!” Lest we forget the “Minutemen” armed, white men patrolling the border!

While immigrant advocates and immigration rights groups are rightly sounding the bells of alarm, before we declare that the sky is falling on the immigrant community, let us take a step back and put these recent sweeps within the historical perspective of our communities.

We can go back to 1930s during the depression years when over 1 million Mexicans and Mexican Americans were deported. Historians Raymond Rodriguez and Francisco Balderrama wrote in their 1995 book, “Decade of Betrayal,” on the 1 million Mexicans and Mexican Americans as unjustly deported or scared into leaving their homes by federal and local officials seeking remedies for the Great Depression. “Americans, reeling from the economic disorientation of the depression, sought a convenient scapegoat. They found it in the Mexican community.”

This attitude of scapegoating and deporting the immigrants has continued throughout the decades.

During the years of the Bracero Program, 1948 to 1964, the Immigration and Naturalization Service (INS) launched Operation Wetback as a way to repatriate illegal laborers back to Mexico. Nearly 4 million workers were eventually deported.

In 1994 former Governor Pete Wilson facing a tough reelection season, blamed the Hispanic community for the States’ economic woes and became the main sponsor for Prop 187 to eliminate public benefits to undocumented immigrants. Wilson rode the anti-Hispanic sentiment to re-election and later ran for President on the same theme. Though Prop. 187 was passed by the voters it was later ruled unconstitutional by a federal district court and Wilson’s presidential bid never did gain any traction, only to fail.

During President Bush’s term the plan was to build a 700-mile fence along the US/Mexico border, at a cost of $1 million per mile. Not much different than President Trump’s plan!

While the recent raids have raised recent fears, the 600-arrested last week it is a long way from the 2.5 million immigrants deported during Obama’s two terms. The only difference between Trump and Obama is that while Obama was earning the nickname deporter-in-chief he pandered to the Hispanic community talking of immigration reform, which never materialized, and the Dream Act during a tough reelection campaign. Meanwhile Trump has not sugarcoated his words, spewing the language of hate regarding the immigrant community.

Locally in San Diego County, Escondido became infamous for its anti-Hispanic attitude, it was to become known as the little Arizona of California. Arizona was infamous for its Dracon anti-Hispanic laws passed by the State. For example Escondido, would pass an ordinance preventing landlords from renting to immigrants, allow the police to set up check point stations in predominantly Hispanic communities targeting immigrants, and promoted the routine of immigration officers riding with police officers, allowing for the arrest of immigrants without papers.

These are just a few examples of the consistent scapegoating, harassment, mistreatment, abuse, and disregard of human rights that the Hispanic community has endured. The question is why?

The city of Escondido is a good example of what is wrong? Escondido, in the Northern part of San Diego, is a city where Hispanics make up over 50% of the population (70,000), yet despite constant voter registration drives (18000 registered to vote), the introduction of district only elections in 2014, there is only one Hispanic on the city council, Olga Diaz, and she was elected long before district only elections. Despite several other Hispanics running in district only elections that have yet to win a race. The white, male, ultra-conservative continue to be elected. Those Hispanics who could affect change are not voting, thus the status quo continues!

At a national level, today while the raids are being conducted the question is, where are the Hispanic elected leaders? Why are they not speaking out publicly? From my perspective, they don’t have “huevos” to stand up and say “ya basta!” The days of fearless leaders such as Rodolfo “Corky” Gonzales, Cesar Chavez, Herman Baca are long gone. Today middle class Hispanic Americans are comfortable in their homes, watching their big screen TV, driving their Preuss and are not affected by immigration per se… that is other people’s problem.

Unfortunately, what they don’t understand it is their problem as well; when I am outside mowing my lawn and the gringos drive down the street probably see me as a labor, possibly one of those perceived as a “risk to public safety” and don’t see me as a US citizen.

Yes, my main concerns are the everyday occurrences such as jobs, education, health, but immigration is also a reflection upon me and you! That is why it is important to all of us!