Guest Voz: The death of the Chicana/o Left

Prior to 1986, a clear Left voice could be heard on immigration reform.

The truth be told, immigration reform has never been a high priority among American progressives; as a consequence, no clear vision of what immigration reform was developed outside the Mexican American community. This lack of understanding and consensus has led to the probability of compromise — that invariably leads to a negation of meaningful and just reform. 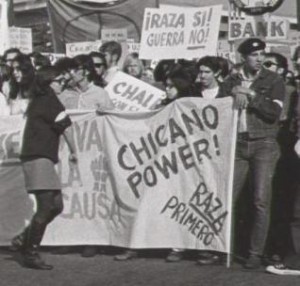 The question has become so muddled that not even the so-called Latino leadership knows what it wants.

Having been invited and having sat at the Democratic Party table as guests of honor, they don’t want to rock the boat –or like my mother used to say quieren quedar bien con todo mundo.

As it is shaping up, liberals seem committed to a path to citizenship for the undocumented, but they also seem willing to ignore the abuses of ICE (U.S. Immigration and Customs Enforcement), and are going along with the increased enforcement of immigration laws — a grotesque and massive immigration apparatus that spent $18 billion on immigration enforcement last year.

It is obvious that large chunks of the Latino leadership is willing to forget the extensive and rich literature on the bracero program, and are disposed to place their trust in President Barack Obama.

The hard Left – what is left of it — opposes a guest worker program that excludes a clear pathway to citizenship for the bracero. They don’t want to go back to the days where American farmers rented Mexicans at will, and repeat a program that was full of corruption and abuses.

As a matter of fact, historically the U.S. has refused to deal with guest workers as “free labor” with the rights enjoyed by other workers. Consequently, the U.S. has engaged in a cut your nose to spite your face policy that has weakened American agriculture, with the nation importing food from China and other countries because it cannot get its crops picked.

As conservative columnist Richard M. Estrada testified in 1995: “One must …insist that the absence of slavery does not imply the presence of freedom. As commonly understood, the term free labor also implies that an individual can sell his or her labor on the open market to whomever will contract for it. It is in this regard that guest worker programs are, by definition, unfree labor arrangements or, at the very least, not totally free labor arrangements…To be specific, the agricultural guest worker is explicitly obligated not to sell his or her labor anywhere else but to the agricultural employer who sponsors entry. Employers tend to prize guest workers for their abilities, true. But they also value them because they have no options and are, therefore, more malleable. (Employers tend to prefer the term ‘disciplined.’)”

It is difficult to talk to Democrats about “free labor;” they prefer to concentrate on the globalization, which is important. However, globalization has always been with us, and not presuming to argue with the great theorist Immanuel Wallerstein, global capitalism is part of world history, beginning before the time of Christ. Numerous transformations caused the uprooting of entire societies.

We must keep in mind that population growth in China and India caused the migration of ideas into the Middle East, Egypt, and Greece. The growth of the Chinese population and its markets moved the exploitation of the Americas, and the movement of “unfree labor.”

Another transformation took place during the Industrial Revolution, and as Oscar Handlin makes clear in his classic The Uprooted global changes in production and population growth led to the uprooting of entire societies – dispersing people not only to the United States but globally.

However, at this point, I am more concerned about what is happening today in the Latino community, and how we can cope with it.

In my view, ideas are important, and the role of a Left voice is vital in counteracting the contradictions of capitalism that lead to unbridled exploitation and the loss of liberty.

At one time, the Soviet Union served as a brake on the imperial obsessions of U.S. foreign policy. Left ideas in this country have made this society more democratic by initiating major reforms.

This contribution is obvious when you consider that the American right wing has not introduced a single reform. The Right’s myopic worldview seems unique to the U.S.; witness that even ultra-conservative German Chancellor Otto von Bismarck initiated universal health care in the 19th century.

In recent times, Mexico was developing a Left voice, but it was muffled by the absorption of the left parties into el Partido de la Revolución Democrática, PRD, in the late 1980s. The coalition of left parties then became a social-democratic political party, and electoral politics softened its voice.

History suggests that a similar process has occurred within the Mexican American community.

As we have become more invested in electoral politics, our electoral gains have softened the voice of the Left within the community on issues ranging from identity to police brutality.

Our elected officials seem more willing to make arrangements, and at the national level our organizations often move to the right to accommodate the interests of other middle class Latinos. Witness that there was no outcry when Marco Rubio pretended to speak for “Latinos” on immigration.

Because of the size of the Latino community, 70 percent of which is Mexican American, it is inevitable that we have been drawn into the game of politics. Without a doubt, the 2012 Presidential Election is a watershed in Chicana/o History.

It is a recognition of our numbers not our skill at playing the political game. In my view, in order to survive the game, we must play it collectively and have clear principles.

Not wanting to sound cynical, it will become more difficult for the Left to be heard because of the transformations brought about by the 2012 election. It is significant that a cadre of wealthy Latino business owners, entertainers, lawyers and financiers formed a PAC and collected roughly $30 million for Obama’s re-election.

The sum contributed is not significant, but the emergence of the Latino PAC is.

Its bundlers sit or will sit on the boards of national Latino organizations. As a group they will represent Latino interests and collectively their political clout and leverage will increase – neutralizing left of center views. Necessarily their schooling and class interests will diverge from positions of the Left on questions such as immigration.

I am not questioning the good faith of the members of the Latino PAC members; however, how they acquired their knowledge and life experiences often form their views and how strongly they feel about them.

Attending an Ivy League is an accomplishment but it also acculturates you, and may even make you more willing to compromise on issues such as immigration. You rationalize that a half a loaf is better than none.

Consider that for a time our voices could be heard through massive demonstrations such as those in 1994 and 2006. If history teaches us anything, we should study why after 1994 they diminished in size largely due to the 1996 Presidential Election and again after 2006 due to the 2008 Election.

Distinguished English Linguist: Living in a world where lies are designed to sound truthful degrades language and life
Comment
New study on the 'why' undocumented immigrants come reveal 'why' they'll never leave voluntarily