Guest Voz: The quiet before the storm that hit Nicaragua left destruction behind the world barely knows 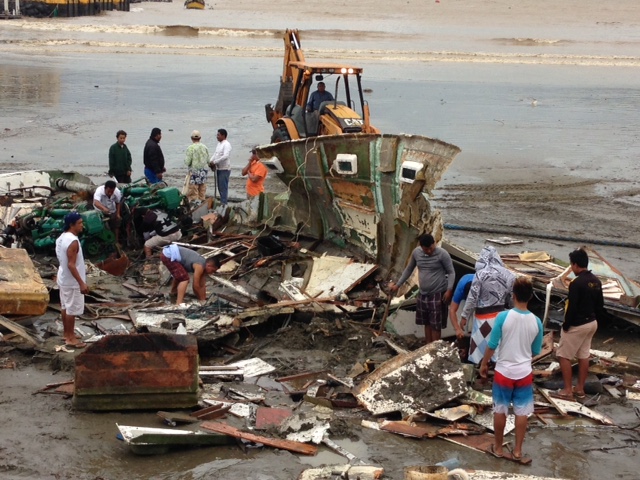 I take the bus from San Jose, Costa Rica to Nicaragua. The bus drops me off about 25 minutes in from the border. There are no stop lights. No signs. But I know this place. It’s called La Vírgen.

This is where I catch a ride to the beach town of San Juan del Sur. There aren’t too many cars passing down this road, and only one taxi speeds by without stopping. After close to 30 minutes of waiting, there are now eight or ten of us waiting for a ride to San Juan.

The sky periodically sparkles with lightning. I know a tormenta is headed this way, and I don’t want to be waiting on the street another 30 minutes in pouring rain. Finally, I see a man in an unmarked car headed the other way. But he looks at us and indicates with his hand that he can swing around. I acknowledge positively.

I hop in the car, and ask how much. I let him know the price should be way lower. So he tells the others waiting that they can hop in for 100 cordobas each so that we can all split the rate.

A backpacking couple from Switzerland agree. Turns out, they’re headed to my hostel. As we drive the next ten kilometers the clouds let loose. In San Juan, it’s raining cats and dogs. Our driver jumps out of the car and tells us to wait inside in the hostel lobby. After a few minutes, he asks the Swiss guy if he wants to make a go for it. He pops open the trunk, and they pass our luggage out assembly line style.

We all thank the driver and pay him our share, which is just a few dollars each.

That night, the rain doesn’t stop.

Before I go to bed, I find a mop to soak up the rainwater inside my room.  At 5 a.m., there’s no electricity so I grab my mini flashlight to inspect the water seepage. Security guards in rubber galoshes are mopping up the central areas. They re-mop where the water coming in through the cracks between the metal roof and the concrete walls in my room.

Day one in San Juan del Sur: I get plenty of R&R. The electricity never comes on, except for a few quickie flashes here and there. I hear the entire state is without power. I read. I meditate. I practice yoga. I eat gallo pinto with pico de gallo.  I’m a happy camper.

Once it gets dark, around 5:30, I hang out to read in the lobby where a generator is connected to a light bulb hanging from the ceiling. I’m expecting my partner to arrive tonight on the same bus I took the prior night. I wonder if he’ll be soaked waiting for a ride at La Vírgen, or if his bags will get rained on at the border crossing.

Based on my ride with the colectivo, I figure he should arrive by 7 p.m.  By 8 p.m., I mention it to the security guard. He tells me the border was closed since early in the morning. There’s no way my partner can get to Nicaragua. Nor could he call or email me, since there’s no power or wifi.

So, I turn in. I relish the quiet in my bedroom. I sing and do more quiet yoga and meditation. My room looks so peaceful.  Two small votive candles with La Vírgen de Guadalupe calm me.

While I am all for preparedness, sometimes we can go overboard tracking storms or just keeping up with the news. All those reports can provoke a lingering state of fight or flight. Sometimes, I think it may be best to disconnect. Besides, the forecasts never really seem to be accurate.

As I was told in Belize, the old men usually are the best forecasters. They can tell by looking at the sky or the ocean.  So, without my wifi, I disconnect and stay in a state of chill. Que Será, Será.

I sleep fairly well. A few times there are some major gusts of wind and who knows what banging or  falling down. Before daybreak, the skies are fairly calm. The humming from a generator at the front desk becomes white noise. Periodically, I hear the security guards talking, and swishing around their wet mops.

More natural light is entering my room, meaning the sky is opening up. By 7 a.m. I want fresh air. I can tell there’s no rain. I go around the corner to the beach. There’s loads of people there. But no bathing suit. No lounge chairs. No towels or visors.

Everyone is in shock. Destruction covers the beach and the malecón.

Boats are not where they should be. They’re smashed. In pieces. Pointed in eery positions. Specks in the sea are partially submerged boats. The porch of one beach side restaurant is busted by a boat stuck in the floor boards. Another is filled with mud. Others are just filled with people gasping and gaping at the power the storm.

This is not your ordinary tormenta.

The old people say they’ve never seen anything like this. Even during Hurricane Mitch, in 1992, there wasn’t this kind of destruction. They shake their heads.

Yesterday’s tormenta wasn’t even a hurricane. But it was filled with wrath. There were fishermen caught up in the chaos of what they call tsunamis. The naúfragos somehow made it to shore in another town. However, one young man was missing.

This morning, I see a friend. He was stuck at home yesterday.  His house was flooded, and he couldn’t cross the two rivers to get to work. He knows about the naúfragos. I mention that a 19-year-old is missing. They found him, he tells me. Dead.

Another piece of news that I think I may have been better off without hearing.

No matter what, I love this corner of the world.