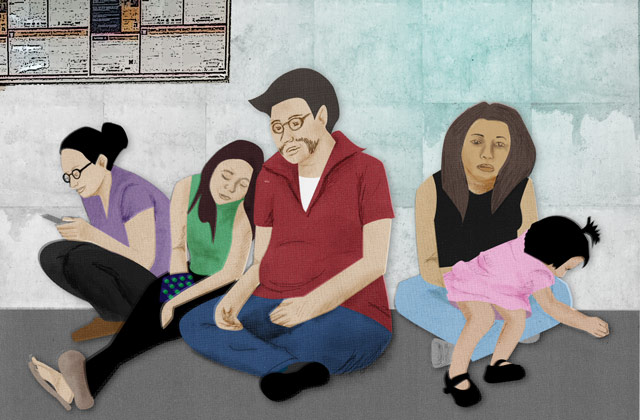 (LL Editor’s Note: The following are excerpts (taken out of order) from the full article Dispatch From Eloy: Detained, and Waiting for Reform.)

Every Saturday morning for the past two years, Alejandra Pablos’s family woke up early in order to make an hour-long trek from Tucson, Ariz., to the Eloy Detention Center, where Pablos was held as one of about 33,000 immigrants who are in detention on any given day in the United States. They’re among close to 350,000 people in deportation proceedings.

Eloy, which is privately owned and operated by the Corrections Corporation of America, holds four kinds of immigrant detainees, designated by jumpsuit color. Green, khaki and blue indicate what kinds of crimes, if any, a detainee has been accused of in the past.

Those detainees who are placed in solitary as punishment are dressed in bright orange. Although Eloy Detention Center is technically not a prison, it certainly operates like one.

It’s an immigrant detention center that, under federal law, does not hold people as punishment for a crime. Rather, Eloy holds people under civil immigration charges.

That distinction is lost on detainees and visitors alike — the facility’s framed renewable business license, issued by the City of Eloy, hangs conspicuously in the lobby-turned-waiting-area. It reads simply, “Prison.”

While the country waits for comprehensive immigration reform, a development that congressional observers of all stripes believe can no longer happen this year, enforcement continues at an all-time high. The president has argued he can go no further with executive power to slow his administration’s record-setting pace of detention and deportation.

The National Immigrant Youth Alliance (NIYA), which organized the Dream 9 and is now working with what’s been dubbed the Dream 30, has refused to wait any longer.

Organizer Mohammad Abdollahi wonders why so many hoped and waited for a comprehensive bill from a House of Representatives that made clear, early on, it would wouldn’t pass such legislation.

“We wish more people would acknowledge reality,” says Abdollahi. “The only time we’ve ever gotten anything done [on immigration] is by shaming Obama, and we know he won’t do anything otherwise.”

During the 2012 election season, NIYA activists began a sit-in at an Obama campaign office in Denver, Colo., on June 5. Similar sit-ins spread to four states, shutting down the president’s campaign offices and demanding that he issue an executive action to halt the deportation of immigrant youth.

Ten days later, Obama announced his Deferred Action for Childhood Arrivals program. Yes, it fell short of an executive action and the president never acknowledged the movement that agitated for the change.

Still, Obama’s announcement was a sign he was paying attention. Absent an election season, however, there may be a lot more waiting ahead before another change.