At the U.S. Office of Personnel Management (OPM) we’ve worked steadily with partners across government to build initiatives that will make the Federal workforce more accessible to applicants, and more responsive to emerging, twenty-first century needs. There is more to be done – but I want to be sure that the projects underway are well known both inside and outside of Washington. 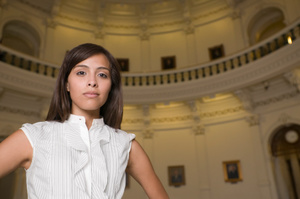 We need a diverse set of talents and experiences and perspectives at every agency – and there are plenty of real-world examples that show it. In October 2011, we relaunched USAJOBS.gov, the central site for all Federal job applications, with initially bumpy results. Comments from people on Facebook became media stories, greatly amplifying poor experiences in those initial days.

Luckily for our agency, we had a diverse leadership team, including several younger people who were comfortable answering questions on Facebook. Octavio Santiago, one of our young Hispanic employees, became a leading public face of OPM on Facebook – because he was among those who felt comfortable using Facebook to get in touch with people who experienced problems.

While our technical experts worked on the root causes of the problems with our experienced managers – including one we pulled back in from retirement – our younger team pulled together to answer every single Facebook comment, 24 hours a day, often with a personal phone call.

It worked. In less than a year since relaunch, we’ve processed over twelve and a half million job applications through USAJOBS.

That’s the strength of a diverse team – it not only helps you avoid problems, it helps you recover quickly and thoroughly when you face challenges you didn’t expect. We were able to turn around both the root problem, and at the same time dramatically change the experience for users who did run into problems — because our team had the diverse set of talents we needed.

Now, there’s still plenty of work to do to make the Federal Government an outstanding model of diversity and inclusion. Looking at the statistics, it’s clear that we’re weakest in our recruitment among Hispanics, and among people with disabilities.

We are recommending strong accountability measures that will clearly identify barriers to Hispanic recruitment and inclusion, where they exist. By looking closely at applicant data and at each stage in the hiring process and career development process on up through Senior Executive Service development programs, we will know what is working and not working at each agency, and OPM will be able to issue a quarterly scorecard for each agency.

We will also partner with student programs, Veterans programs and Hispanic Serving Institutions to promote our Student Pathways Programs and promote the idea of a career in Federal civil service. We want to make sure Hispanic Veterans are fully aware of Veterans hiring authorities and opportunities. And we want to make students and agencies alike aware of the possibility to convert student interns into Federal employees, and the possibility of repaying or deferring student loans under existing programs.

New regulations on student pathways into Government take full effect the first week of July, laying out three clear and streamlined pathways: First, current students can apply to internships. Second, people who have graduated get a two-year window to apply to recent graduates programs. And third, our revitalized Presidential Management Fellows program now lines up with the academic year.

Through each of these three pathways, participants learn what it’s like to work in government, gain on-the-job experience, and have the possibility of converting into Federal employment. We hope that these pathways will better enable the Federal government to recruit and retain top talent fresh from learning the latest skills – for example, Octavio, the employee I mentioned earlier, is a Presidential Management Fellow.

Each of these efforts fits in with OPM’s broad mission to recruit, retain and honor a world-class workforce for the American people. And they also fit with specific direction from President Obama.

By Executive Order, the President directed OPM to take the lead in developing and implementing plans for Diversity and Inclusion in each Federal agency. We’ve encouraged agencies to consolidate the plans they already have in place, and make sure they not only make good policy, but become good practice. The agency-specific plans collected by OPM vary somewhat in their details, but almost all are based on four main pillars.

First pillar: An active and robust diversity and inclusion council. For any plan to work, it will require the attention and focus of an active group. Human resources officers and Equal Employment Opportunity specialists and Diversity and Inclusion officers will need to communicate with one another, collaborate, and integrate their work. They’ll look at the needs and the situations that are particular to their agencies. And they’ll need to keep at it.

Second pillar: Mentorship. Mentors are key supports to any career – including mine. They help answer questions that are daunting to even ask. How do I earn a promotion? How do I give helpful feedback to colleagues? Where can I find job opportunities that match my skill level and my ambition? These are questions that can make and break careers, no matter who you are.

Third pillar: Diversified leadership. Diverse leadership not only serves as an example to ambitious employees that they too can rise, it also is essential to the goals we want to achieve – doing the work of the American people to the best of anyone’s abilities.

This is one place we’re already seeing some progress – we saw more Hispanics joining the Senior Executive Service in 2011 than in past years. Hispanic hires in the SES increased from 2.7 percent in FY 2010 to 5.4 percent in FY 2011, a strong jump that means that Hispanics now make up 4.1 percent of the SES.

To support the continued development of future Hispanic leaders in the Federal government, the Senior Executive Association, LULAC, the National Organization of Mexican American Rights (NOMAR), and the National Association of Hispanic Federal Executive are developing a Senior Executive Leadership program for Hispanics. OPM is excited to provide training in coordination with these efforts – we look forward to seeing our nation’s pool of talent grow.

Fourth pillar: Metrics and accountability, so that we can measure the impact of our plans, across agencies. This builds transparency and accountability into each Diversity and Inclusion plan, since we’ll know and you’ll know if it’s working. And it helps us look at agencies where we see success, where we are building strong teams and getting the innovations we need to meet the challenges America faces.

Make no mistake, to rise to the challenges of this century, our country will need every American – of every race, gender, age and orientation. We can’t afford to leave any talent on the table. That’s why we’re committed to bringing down barriers and making sure every American gets the same opportunity. That’s why OPM strives every day to uphold our bedrock merit principle: that employees should be judged by how well they do the job – and nothing else.

John Berry is the Federal Government’s Chief People Person. As the Director of the United States Office of Personnel Management, he is responsible for recruiting, hiring, and setting benefits policies for 1.9 million Federal civilian employees.