Latina Lista: News from the Latinx perspective > Columns & Features > Guest Voz > Guest Voz: We are a better society when people are not quiet — Standing up for Trayvon Martin

Guest Voz: We are a better society when people are not quiet — Standing up for Trayvon Martin 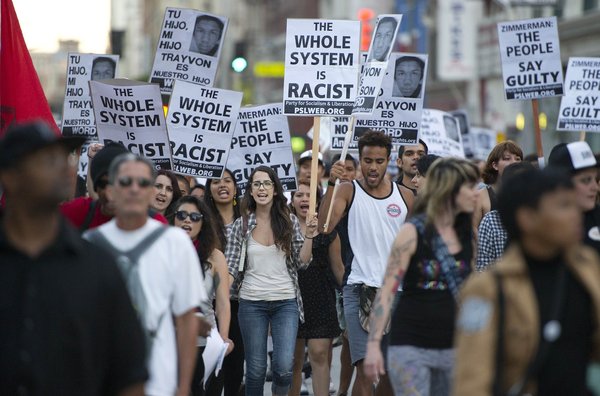 Why should Latinos support Justice for Trayvon Martin?

It is not the first time that I have been asked that question about another group. Take care of the family first is always the mindset of any group.

Through the years, people have questioned why I was against capital punishment and supported cases such as that of Mumia Abu-Jamal, a black journalist originally sentenced to death in 1981 for the murder of Philadelphia police officer Daniel Faulkner.

I got involved in the case through my attorney friend, Elliot Grossman, who enlisted me during his appeal of the conviction of Manuel Salazar, a young Chicano artist on death row in Illinois, who had been sentenced for the 1984 murder of a white Joliet police officer.

Salazar was freed after the Republican Governor of Illinois, George Ryan, declared a moratorium on executions in January 2000. Ryan’s action led to the exoneration of 13 death-row inmates — the most prominent was Rolando Cruz, whom the state freed after 12 years on the Illinois death row for the 1983 murder and rape of a 10-year-old girl. A repeated sex offender and murderer named Brian Dugan confessed to the crime. It was collaborated by DNA testing that linked Dugan to the crime. Elliot for a time was Mumia’s attorney.

When people asked me why we were supporting a black instead of concentrating on Chicanas/os, my first reaction was flippant (porque me da la chingada gana) but after thinking, my response changed, and it was similar to that which I have toward the Trayvon Martin case: “It is not only Trayvon Martin who was wronged, it was society. The law is bad and encourages this behavior toward people who look different. Look at the attacks and murders of undocumented immigrants.”

In supporting Mumia or Trayvon Martin, we are insuring that this injustice will not spread.

I also reject the argument that George Zimmerman should be supported because he is Latino. Incidentally, he never identified as a Latino, and he obviously identified as white.

The Huffington Post’s Gene Demby dug into his past and came up with an old MySpace page belonging to Zimmerman. In it, he made disparaging comments about Mexicans, and he bragged about a 2005 criminal case against him.

The prosecution was so afraid of the issue of race that to my knowledge it was not brought up.

On Myspace, Zimmerman discussed his hatred toward Mexicans, saying why he did not miss his former home in Manassas, Virginia:

“I dont miss driving around scared to hit mexicans walkin on the side of the street, soft ass wannabe thugs messin with peoples cars when they aint around (what are you provin, that you can dent a car when no ones watchin) dont make you a man in my book. Workin 96 hours to get a decent pay check, gettin knifes pulled on you by every mexican you run into!”

In that same year, Zimmerman was arrested and charged after an altercation with a police officer and his fiancé at the time got a restraining order against him.

It doesn’t take a genius to recognize that Mexicans and other Latinos are also profiled by police agencies.

Florida’s “Stand Your Ground” gun laws encourage rampant racial profiling. The postings take on many levels. Even so, Zimmerman’s supporters try to portray him as the victim and a peace-loving citizen who was trying to protect his neighborhood, forgetting that Trayvon’s father was also a neighbor.

I feel almost certain if Trayvon did not look different he would be alive today.

Now the jurors will write their books and Zimmerman will turn whiter, and appear as a guest of honor at rightwing functions. His claim to fame is that he murdered a 17-year old kid who looked different.

The facts say that Zimmerman was a racist before he killed and when he killed Trayvon Martin.

So why are people taking to the streets when it’s too hot to be walking around in the sun?

The simple answer is “Sometimes You Have to Shout To be Heard!”

Henry David Thoreau in Civil Disobedience and Other Essays wrote”

Unjust laws exist; shall we be content to obey them, or shall we endeavor to amend them, and obey them until we have succeeded, or shall we transgress them at once? Men generally, under such a government as this, think that they ought to wait until they have persuaded the majority to alter them. They think that, if they should resist, the remedy would be worse than the evil. But it is the fault of the government itself that the remedy is worse than the evil. It makes it worse. Why is it not more apt to anticipate and provide for reform? Why does it not cherish its wise minority? Why does it cry and resist before it is hurt? Why does it not encourage its citizens to be on the alert to point out its faults, and do better than it would have them?

Because of civil disobedience, injustices such as slavery were kept in the public view and consciousness.

Just in my lifetime, I have seen countless examples of inter-racial solidarity and the effectiveness of civil disobedience: the civil rights movement, the anti-war movements, stopping the U.S. from the use of nuclear weapons, the movements for Chicana/o studies, the middle-eastern wars, the LBGT movements, to name a few.

People were not quiet in those instances and we are a better society because people shouted.

Unfortunately, I think many of us are forgetting history. Nothing comes without struggle. As Henry Thoreau wrote:

Must the citizen ever for a moment, or in the least degree, resign his conscience to the legislator? Why has every man a conscience then? I think that we should be men first, and subjects afterward. It is not desirable to cultivate a respect for the law, so much as for the right. The only obligation which I have a right to assume is to do at any time what I think right.

Trayvon Martin was a 17-year old kid who is no more because Zimmerman saw him as different.

California region provides new Mexican cónsul challenges, opportunities
Comment
Salvadorans found to have the most positive attitudes towards the US