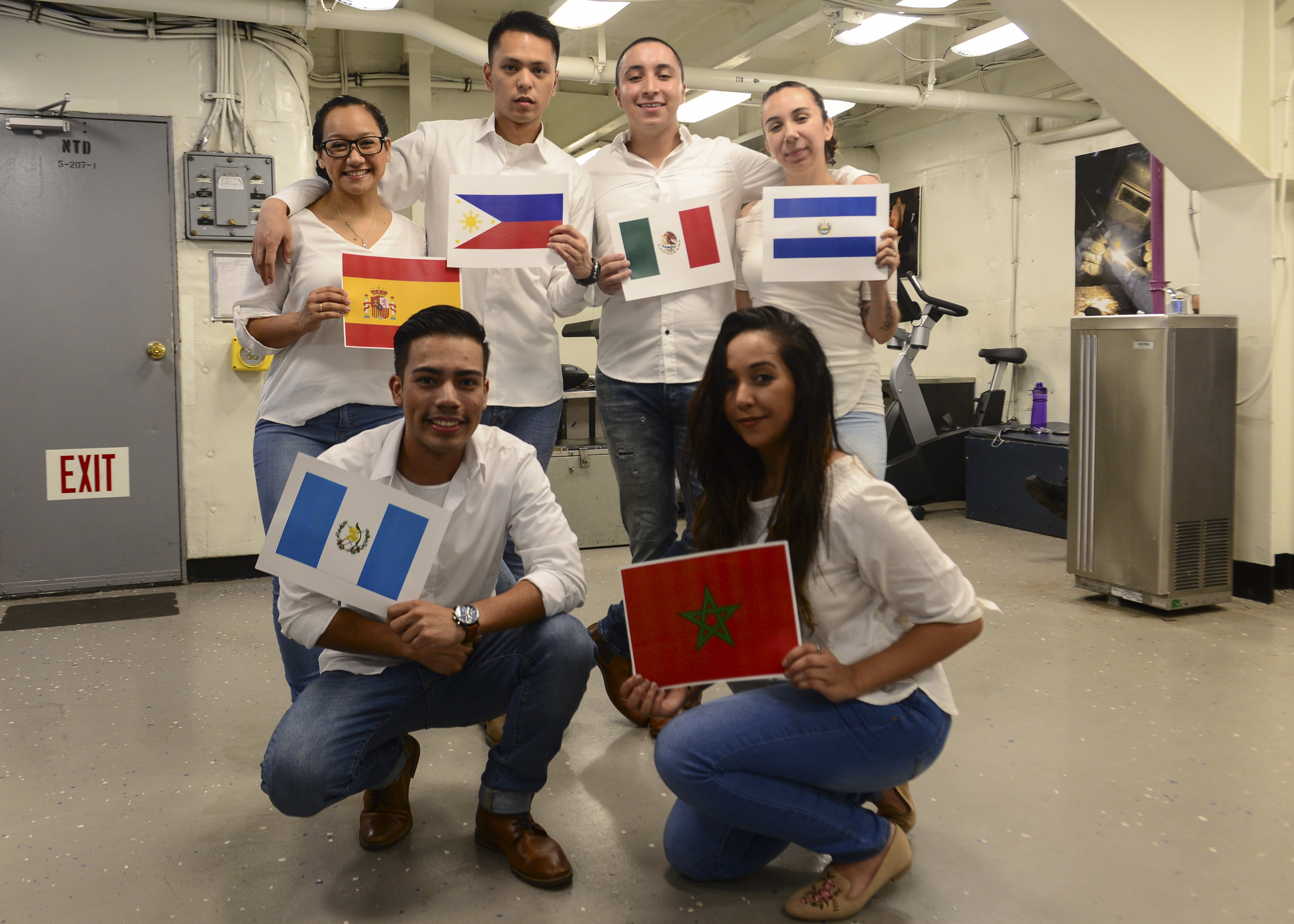 For the past couple of weeks, a group of Sailors have been hard at work preparing for several events that they hope will translate their passion, pride and most importantly their heritage to the crew of the aircraft carrier USS Nimitz (CVN 68).

The multi-cultural committee aboard Nimitz has been conducting several events celebrating Hispanic Heritage Month which started Sept. 15 and concludes Oct. 15. The committee is scheduled to host game nights with Hispanic heritage themes, as well as a celebration to include music and dancing to highlight different Hispanic cultures.

Aviation Boatswain’s Mate 3rd Class (Handling) Ashley Astacio, a native of Springfield, Mass. and president of the multi-cultural committee, believes it’s important to display her heritage and the heritage of her fellow Hispanic shipmates to the Nimitz crew.

“Hispanic heritage is going to be celebrated outside the military, but the military has decided to observe it and make it an actual instruction (ALNAV 006/17),” said Astacio. “I think it’s important to display our heritage because not only have Hispanics impacted back home in the United States, we also have an impact when we join the military forces. Puerto Ricans, Mexicans and people from South and Central America come to the United States and join the military and that allows us to have an impact all over the world.”

Although Astacio was born in Springfield, her father was born in Humacao, Puerto Rico and her mother, born in Brooklyn, N.Y., spent a lot of time traveling back and forth from the U.S. and Isabella, Puerto Rico. Astacio has developed a strong sense of pride in her family’s roots and heritage. She, along with the committee, are delighted to be able to share some of their culture with fellow shipmates.

“I want people to learn something new from a different culture,” said Astacio.

On Sept. 25 the committee held a game night with questions based on Hispanic history, cuisine and pop culture. They have also scheduled a night to play Loteria, often referred to as “Mexican Bingo”.

“I think game night was a success,” says Astacio. “I do think participants learned something new about Hispanic culture, especially about food and political figures.”

In addition to game nights, the committee is planning a celebration that will include piñatas, tres leches cake, music and dancing.

Yeomen 3rd Class Daniel Munoz, from Inglewood, Calif., and vice president of the multi-cultural committee knows the differences in culture.  Similar to Astacio, Munoz’ parents were born in a different country. His parents were born in Guatemala, his father in Retalhuleu and his mother in Escuintla.

“Every Latin culture has their favorite type of music, for Guatemala it is Marimba which is played with the xylophone,” said Munoz.

To display to the Nimitz crew a bit of this variety, four pairs of Sailors aboard Nimitz will be dancing different styles with different sounds to include; Bachata, Cumbia and Merengue. Munoz will be one of the Sailors participating in the dances.

“There are many different types of dances in the Hispanic culture, but the reason we chose these are because it was our top three favorites and shows variety,” said Munoz. “Dancing is a form of expression to celebrate accomplishments, birthdays, anniversaries and a way for everyone to just get together and have a good time.”

The main objective for this month’s festivities is for the Nimitz crew to have a good time, maybe learn something new and bring the crew closer together through diversity.

“It’s important to celebrate everyone’s heritage because we get to learn more about each other, where we come from, and a lot of us would be surprised how much we have in common with one another from different backgrounds,” said Munoz.

Nimitz is deployed in the U.S. 5th Fleet area of operations in support of Operation Inherent Resolve. While in this region, the ship and strike group are conducting maritime security operations to reassure allies and partners, preserve freedom of navigation, and maintain the free flow of commerce.

Previous Post For marginalized teens, activism may lead to better jobs
Next PostThe Women of Color ‘Solutionaries’ Who Are Taking On Detroit’s Deep Divisions

For marginalized teens, activism may lead to better jobs
Comment
The Women of Color ‘Solutionaries’ Who Are Taking On Detroit’s Deep Divisions