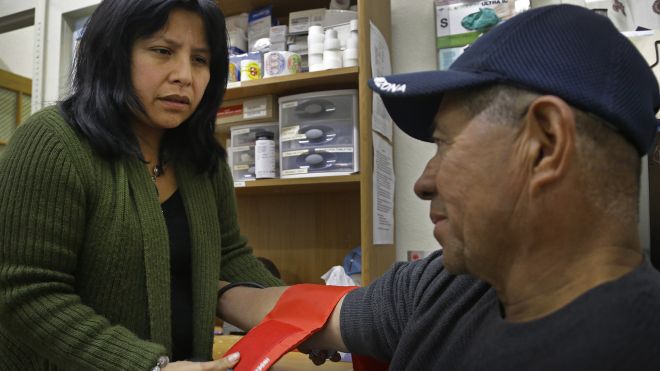 The 50th anniversary of the Civil Rights Act serves as a reminder that politics and history shape the nation’s health care delivery system. Our forefathers wrote that “all men are created equal, that they are endowed by their Creator with certain unalienable rights, that among these are life, liberty and the pursuit of happiness.”

But does everyone have a right to the same level of “happiness?” And is health security among these unalienable rights? The answer should be simple: If all people are truly created equal, and most of us agree that we are, then all of us who live in this country should have equal access to the basic necessities of life.

Although the Supreme Court outlawed the principle of separate but equal in 1954 with Brown vs.the Board of Education, it did not address the fundamental right to equal health care. A decade later, however, President Lyndon B. Johnson’s war against poverty framed barriers to health care as a civil rights issue.

President Johnson made the nation aware of unequal access to health care by focusing on these specific groups. Congress amended the Social Security Act to create Medicare and Medicaid, using the taxing authority of the U.S. Treasury. Over the last half century, enactment of these health care policies has largely removed major barriers to care for the most vulnerable in our society. The public dollars of Medicare also served to end racial segregation in U.S. hospitals.

Today, that government generosity, and the solidarity among different age, ethnic, and racial groups that it fosters, is dwindling. An increasingly negative political rhetoric and gridlock in government reflect deep resentment of the expense of the Welfare State, especially the portion that supports immigrants and racial minorities.

In many areas of American life, minority Americans find that they are still separate and unequal. Serious health disparities based on race persist. Poverty continues to undermine the physical and emotional health of a large number of Americans, particularly those of Hispanic heritage.

According to the Census Bureau, Latinos will very soon make up a large fraction of the working-age population and a growing percentage of retirees. Latinos are more likely to grow up in poverty and stay poor than the general population. This disparity extends to health care.

In 2013, one in three Latinos in the United States were uninsured. Latinos go without health insurance despite their higher than average presence in the work force. Public opinion polls suggest tolerance for this disparity may be rooted in anti-immigrant views. The vast majority of Americans — 80 percent — oppose providing access to health insurance to individuals who are unauthorized to be in the country.

Under the Affordable Care Act, most Americans are entitled to health care because of Medicaid expansion or subsidies in insurance exchanges. But many Hispanics, especially Mexican-origin immigrants, are excluded from these options for various reasons.

Ironically, research shows Mexican immigrants are cheaper to cover because they tend to be younger and have better health than the majority of American citizens. Even so, the law makes it clear that the unambiguous right to a basic package of health services is not extended to all individuals living in the United States.

The citizenship rights guaranteed by our Constitution cannot be fully realized without adequate health care. The health of the population is the basis of wealth and power, and adequate health care should be provided to all individuals and groups regardless of their race, ethnicity or cultural background.

Basic social rights, including health care, guarantee a healthy and productive work force that benefits everyone. In an increasingly competitive world, a healthy population is vital if our nation is to remain a leader among nations. The Affordable Care Act represents only a beginning.

As we move forward, it is necessary to provide all legal residents of our country equal access to the basic necessities of life.

Jacqueline Angel is a professor of public affairs and sociology and a faculty affiliate at the Population Research Center and LBJ School Center for Health and Social Policy at The University of Texas at Austin. She is the co-author with Ronald Angel, professor of sociology at The University of Texas at Austin, of a new book, Latinos in an Aging World, which explores the welfare of the Latino population in the U.S.