The day the Supreme Court handed down its decision on Arizona’s SB 1070, I received about a dozen text messages saying, “We won!” 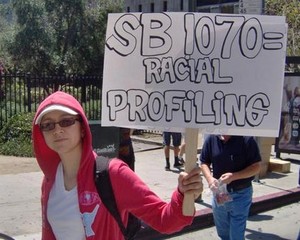 Knowing the history of the Court and dealing with this sort of wrongheaded thinking since the Bakke Case of 1978, I knew that I had to be skeptical and quickly read the incoming news, which using boxing jargon said that it was a split decision, that the court had struck down three key provisions of the law and kept one.

I could hardly see this as a victory and texted back, “Bullshit!”

Inevitably friends and foe alike shoot back the refrain, “Rudy, why do you always see the glass as half empty instead of half full?” I am so used to that inane question that I have canned a response; “because my mother did not raise a pendejo!”

I would be pretty stupid if I went to Starbuck’s and asked for a full cup of coffee and only got a half a cup and paid for the full cup. Even the server asks, “Do you want to make room for cream and sugar?” A half a cup is not a full cup no matter how you cut it.

But stupid comments about the glass being half full or half empty have been a way of coping with the reality that our liberties are being whittled away.

How could anyone in their right mind believe that Justice Antonin Scalia would be fair which would require “judicial restraint,” implying a degree of impartiality. Scalia told us where he stood when he said of President Obama’s ruling exempting students from deportation:

“After this case was argued and while it was under consideration, the Secretary of Homeland Security announced a program exempting from immigration enforcement some 1.4 million illegal immigrants. The president has said that the new program is ‘the right thing to do’ in light of Congress’s failure to pass the administration’s proposed revision of the immigration laws. Perhaps it is, though Arizona may not think so. But to say, as the court does, that Arizona contradicts federal law by enforcing applications of federal immigration law that the president declines to enforce boggles the mind.”

There was little comment in the media that Scalia has received thousands of dollars from the Koch Brothers for speaking engagements, as well as, from organizations associated with ALEC, the American Legislative Exchange Council — which are the godparents of SB 1070.

This touched off a Laker mentality among many Latinos who chanted “we won, we are number 1.”

Latinos were elated even though they had gotten a half cup of coffee and paid for the full cup.

In all this, the Constitution of the United States has been trampled. A basic principle is that the federal system “has the legal authority and responsibility to control immigration, and establish the conditions under which people from other countries can come to the U.S.”

Arizona agriculture has benefited hugely from government labor policy and government subsidies that include massive reclamation programs and the handing out of millions of acres of land to private corporations.

Arizona, a freeloader state, receives over $1.30 cents back for every dollar it sends to Washington D.C.. It shows its appreciation by trying to usurp its power.

Although most of Arizona’s law is incompatible with federal law, Scalia and his gaggle of corporate pimps ignore the reality that Arizona is attempting to nullify the rights and duties of the federal government.

The Confederacy attempted to nullify the Constitution and used the pretext that the federal government was not enforcing the Fugitive Slave Laws. A bloody Civil War was waged and many believed that the issue was settled.

Logically, the Court’s ruling was all over hell; it weakened the federal preemption powers by vacillating on the right of state officers to arrest immigrants for being deportable. It did and it didn’t uphold the “show me your papers” provision, which requires state and local police to determine the immigration status of anyone suspected of being an undocumented immigrant during traffic stops and other detentions.

Incredibly, the plaintiffs did not raise questions about racial profiling in their briefs, which is clearly prohibited by the Constitution.

Let’s face it, it is impossible to enforce this kind of law without relying on discriminatory stereotypes based on skin color or accent. As one critic put it,

“Under the Arizona statute approved by the Supreme Court today, the simple acts of taking one’s children to school, buying groceries, or attending church will put citizens and noncitizens alike at risk of being racially profiled and unlawfully detained at the side of the road – or worse, locked up in jail…”

What concerns many of us is that the decision encourages copy-cat laws. This will tie us up in the courts for years and millions of dollars will be wasted on litigation.

The Court can pontificate all it wants about racial profiling, but what about compliance?

My mother did not raise a fool and I look no further than the statements of Maricopa County Sheriff Joe Arpaio who has defiantly said he will continue to racially profile Latinos, as well as, make illegal stops and seizures in the Phoenix area.

Georgia has passed similar laws and it does not matter to its politicos that the loss of labor costs the state over $1 billion annually. Mississippi, Alabama and even Pennsylvania have succumbed to this lynch mob hysteria.

A Utah bill requires police to check the immigration status of anyone detained for a felony or serious misdemeanor, making checks discretionary for those suspected of lesser offenses.

Human rights activists have exposed pretexts that amount to avoidance.

It is a shell game: the Court strikes down the most controversial portions of 1070, requiring police officers to check the immigration status of people they stop, while giving police license to ask for the detainees papers under another pretext.

In California, authorities do not need the U.S. Supreme Court ruling upholding Arizona’s “show me your papers” immigration law to begin turning people over to the federal government for deportation, witness what is happening in Escondido.

These discussions always bring me full circle to Tucson and HB 2281. I am not seeing the glass half empty when I say that for going on forty years Arizona has violated the rights of Mexican and Native American children and avoided compliance with Brown v. Board of Education.

My worse fear is that a ruling on HB 2281 will follow the example of 1070 and spread to other states, California included.

It is not a case of seeing the glass half empty to say that administrators such as Superintendent of the Tucson Unified School District John Pedicone are purposely ignoring the needs of Mexican American students and are ignoring studies that prove effective methods in teaching them.

As a professional educator, I know that the system is failing all students and to ignore this historical fact is criminal, especially when the purpose is to line one’s own pocket.

I have no patience with wrongheaded thinking such as the glass is half full or a half a loaf is better than none.

I know the difference between a Joe Arapaio who wears a white robe and Antonin Scalia who wears a black robe – the color shows that Scalia outranks Arapaio.