LatinaLista — It’s not easy being a Democrat in Texas. The Lone Star State, known as much for being a Red State as home to father-son presidential duo the Bushes, has always had a strong political rivalry. Yet, this election season, in recent memory, is a little different in that the ferocity of that rivalry is striking many as going beyond politics.

It’s something that the Texas Democratic Chairman Judge Gilberto Hinojosa feels compelled to speak out against. The following is a statement he issued on calling for a stop to the blatant racism exhibited by some allegedly Texan Republicans — it’s a call that, unfortunately, doesn’t only pertain to Texas. 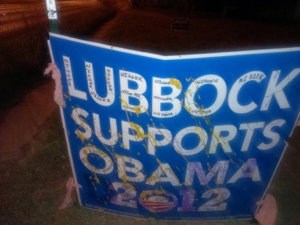 Since I wrote on Saturday about the situation in Lubbock, I can’t stop thinking about it.

In politics, it’s not unusual to have political signs stolen. However, having Obama signs covered in the “n-word,” sprayed with mustard, and put back up in place, is outrageous. Shooting Obama signs is a violent statement.

What is happening in Lubbock is racism. Racism that we also saw when an Austin man hung a chair from a tree after the Clint Eastwood talk at the RNC. The same sort of racism that drives voter suppression. In-person voter fraud has been shown to be a fallacy, and Voter ID laws disproportionately disenfranchise voters of color.

I am not saying that all Republicans engage in racist acts or statements. In fact, I am sure that many members of the Republican Party are just as disturbed as I am by these things. But last week a non-partisan AP poll found that 79% of Republicans harbor some racist views. It starts with the leadership.

We have Donald Trump obsessed with birther beliefs, Sarah Palin using “shuck and jive” to describe our President, and John Sununu saying that Colin Powell only endorsed the President’s reelection because he is black. Republican leadership uses racist tactics, and now we see those tactics have reached the streets of Lubbock.

As insane as the fact that the Republican Senate candidate Ted Cruz has refused to answer whether he believes that President Obama was born in the United States. As crazy as Lubbock’s Judge Head saying that the President’s re-election will cause a civil war. And then that same Judge posting overtly racist posters in his courthouse.

This is not an outlier; this is a theme. This is a culture and policy through which the Republican Party aims to break America into a race divided battleground. This is the Republican Southern Strategy, writ large.

We’re calling out the racism acted out by the Republican Party. They need to either cop to it, or strongly condemn it.

Now more than ever, Texans who believe in an equal society – Texans who see us all as brothers and sisters, must stand up. When we see racism, we need to be brave enough to call it by its name. And we need to do everything in our power to fight against it, starting with going to the polls and voting.

Gilberto Hinojosa is chairman of the Texas Democratic Party

featured, Obama, racism, Republicans, vandalism
Previous Post Teaching a new generation in Latin America math and science via free online tutorials
Next PostThe GOP's own contradiction is what alienates Latinos from thinking its their party