Who Speaks for Latinos Against Trump? 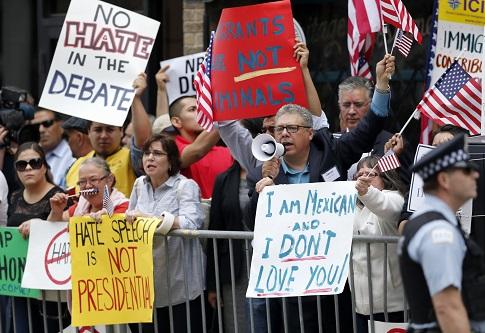 I was just reading an article by some knucklehead lamenting the lack of Latino leaders fighting Trump’s anti-immigrant policies. Then I read an article questioning if electing more Latinos in Arizona makes a difference for the community.

I’m scratching my head wondering what world do the two authors live in?

How unaware can they be to have missed the very public defiance of Trump’s anti-sanctuary city policies by CA Senate Pro Tem Kevin de Leon repeatedly on national news including through the introduction of a CA sanctuary state bill. Or equally the Gubernatorial campaign of former LA Mayor Antonio Villaraigosa whose signature branding is a mass social media campaign dubbed “No Ban No Wall.”

The Arizona doubts are particularly vexing since no state boasts Latino leaders and voters that have done more over the last ten years to meet and defeat the challenge of racist exclusion of Latinos and immigrants.

Arizona Latino leaders like State Senators Martin Quezada and Johnny Mendez have led the charge to double Latino voting since the notorious racists Maricopa Sherriff Joe Arpaio and Senator Russell Pierce enacted heinous anti-immigrant policies and laws in 2006 and 2010. Even more so both Arpaio and Pierce were unelected thru Latino-inspired, Latino-led campaigns. And their policies have been reversed.

And even as I write, CA Secretary of State Alex Padilla is on national TV denouncing Trump’s voter suppression commission and pledging non-cooperation with same.

During April and May Latino legislators in Austin, TX fought ferociously against the “show me your papers” law to outlaw sanctuary cities and deputize state police as immigration agents.

Outnumbered two to one by Republicans, the mostly Latino democratic caucus filibustered, maneuvered, sat-in, coordinated with outside protestors, in short, everything to fight the ultra-right anti-immigrant bills. They lost but they fought led by Mexican American Caucus Chair Rep Rafael Anchia of Dallas.

So, to these critics I say check your facts. Latino leaders are spearheading community resistance to Trump’s policies at every level whether in elective office or on the streets through protests held by numerous groups like the Latino Congreso, Hermandad Mexicana, NDLON, United We Dream, Alianza Americas, Red Mexicana, Border Angels, LUPE, and many, many more.

Does it matter for Latinos to elect candidates of their choice to office?

You bet it does!

And we have only just begun.

I suppose the question to ask yourselves is, Whose interest are you critics serving with your doubt-sowing?

Antonio Gonzalez is president of the Southwest Voter Registration Education Project (SVREP), the premier national Latino vote organization in the US. He is based in Los Angeles. Follow him at @agonzalez1217.

politics, racial justice, social justice
Previous Post Students’ test scores tell us more about the community they live in than what they know
Next PostSacrificial young wolf adorned with Aztec gold discovered in Mexico City