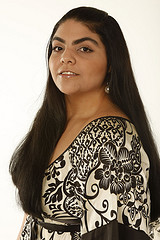 CARACAS — Venezuelan native and fashion designer, Angel Sanchez, believes every woman should have a little black dress. It’s a message that he shared during the recent sneak peek showing of his line, “Angel for Angel Sanchez” at the main fashion event of Central America’s Fashion Week Panama 2011.

Twenty-two different models walked the runway in a show that was heralded as one of the main attractions at Panama’s fashion festival. Unfortunately, Angel Sanchez could not enjoy the attention because of previous activities booked in the United States, but his designs served as the perfect stand-in for this internationally popular designer.

Sanchez’s clothes exploded with colors appropriate for this season of the year — magenta, blue, coral and green tones, such as mint and emerald.

According to his spokesperson, Carolina Alvarez, Angel Sanchez is always passionate about the construction of his dresses. In this sneak peek, he showed his preference for clean architectural lines.

With over twenty years in the fashion industry, Sanchez’s designs are currently in the best boutiques and stores in the United States, Mexico, and the main cities of Latin America and Europe.

The designer has dressed celebrities such as Eva Longoria, Gabrielle Union, Nicollette Sheridan, Sandra Bullock, Barbara Palacios and Brooke Shields, not to mention the beautiful brides that he has dressed as Tatiana Blatnik, now wife of Prince Nicolas from Greece.

Panama’s Fashion Week is considered the most important event in Central America related to fashion. This year, 24 Panamanian designers plus eight international designers were invited. Full proceeds from the event are to be donated to at least six local charity organizations.

This event was celebrated at the Islands of the Centro de Convenciones Atlapa in Panama’s capital. In addition to the fashion shows, the event also featured beauty products, accessories and electronic devices.

Local fashion was represented by talented designers as Jaime Luna, Moisés Sandoya, Federico Visuetti, Michelle Zark, Melina Typaldos and Gladys Vallarino, all of them inspired by the culture and folklore of Panama.

Besides Venezuela, fashion designers from United States, Colombia, Honduras, Peru, Dominican Republic and Ecuador had the chance to showcase their work as well.

Since 1999, Jennifer has penned a regular column, Tu Rincon con Jen, for the only online site dedicated to plus size people in Spanish, gordos.com.

In addition, Jennifer continues to provide constant inspiration for women of all sizes through her blog, Facebook page. She says that she always knew that when it came to defending who she was, no one was going to do it for her.

Previous Post Tulsa police chief asserts: "We are not immigration agents"
Next PostDiabetes affects thousands in El Paso, but the Diabetes Association is on their side

Tulsa police chief asserts: "We are not immigration agents"
Comment
Diabetes affects thousands in El Paso, but the Diabetes Association is on their side