Latina Lista: News from the Latinx perspective > Local News > South > A son-in-law remembers the man, the cause and all who he inspired as Champion of Farmerworkers’ rights – Cesar Chavez

A son-in-law remembers the man, the cause and all who he inspired as Champion of Farmerworkers’ rights – Cesar Chavez

As news spread last week that President Obama was coming to Kern County, California. to name Cesar Chavez’s gravesite and home a national monument, the e-mail messages started pouring in. Questions arose as to what is this place called La Paz? Just where is it? Is it in Keene?

Actually, it is both, but mostly, it’s the place Cesar Chavez founded as the Farm Workers Union headquarters and where I had the privilege of sharing many hours with him. 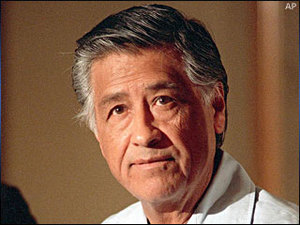 Fresh out of college, I was his personal assistant, traveling press secretary, speech writer, humorist, dog training intern, son-in-law and friend. I was honored to walk the grounds of La Paz hundreds of times with Cesar, the definitive groundskeeper and tour guide in-residence.

I can’t think of a greater honor to bestow upon this person who many of us referred to as “The Chief,” “The Old Man” and “Brother Cesar.” It also honors the many people who were part of his life and legacy, whose lives were impacted by a journey that brought him to his place of peace, Nuestra Senora Reina de la Paz, or simply, La Paz.

For a few brief moments the world, through the lens of our nation’s 44th President, Barack Obama, will converge and commemorate the grounds, memories and significance of this 200-acre complex, located 28 miles southeast of Bakersfield in the Tehachapi Mountain foothills.

This former Kern County Tuberculosis Sanitarium was purchased in 1970 by the National Farm Workers Service Center through the generosity of Edward Lewis, a producer of, among other well-known films, “Spartacus” and “Missing.” Because of Lewis, Cesar was able to move his family to La Paz in 1971.

Were Cesar to be with us on this day, I believe his message would include, “I bring you greetings from the farm workers movement — hard working women, men and children who put the food on the tables of everyone in our country and around the world, who often don’t have enough to feed their own at home.”

As we honor Cesar’s humanity, courage, vow of poverty, and brilliance that brought him from the sands of Yuma, Arizona to a self-contained complex for social, labor and political school of thought and action, there will be many visions of what was and what is yet to be accomplished.

Beyond the proud moments for his wife Helen, his children, grandchildren, great-grandchildren and his extended family, will be thoughts of Cesar fully in his element. He walked and traveled across California, the U.S., Canada, Europe and Mexico where he spoke with the most common (people) as well as the most powerful.

La Paz was a place like no other for Cesar. There, he hosted among other luminaries, Kennedy family members, Coretta Scott King, Andrew Young, Anthony Quinn and thousands of farm workers who came to his farm worker weekend retreats to learn about courage, conviction and contracts.

He held long conversations about educating humanity with influential writers in the world of education, Brazilian Paulo Freire and Ivan Illich. It was here that American Indian Movement leaders and environmental activists mixed with Hollywood stars to pick his brain and brainstorm about social change. Here, it must be noted that his wife, Helen, was a world class cook and served them all.

On this day, we will remember the farmworkers who took on his cause when there was no hope for a better tomorrow and the rabbis, ministers, nuns, priests and bishops who made his cause their own. The thousands of $5.00-a-week volunteers, legions of students, professors and teachers across the country who walked boycott picket lines, the AFL-CIO and UAW members and leaders who bet on him with their dollars and worked with him every step of the way and the legions of Latinos inspired by his emphasis on the importance of education.

An excerpt from Cesar’s burial service poem says it thusly:

“La Paz, his peace, the croaking sounds, how smooth the waters flow – his children, his friends, he loved, he taught, to be good people is what he sought. Boycott and Huelga, two special loves, he treated as his doves, that saintly smile, always the extra mile. As though he somehow knew, that day the eagle flew.”

It is no small tribute to know that all this focus on a desolate mountain spot came about because Helen granted Cesar’s wish of burying him in a rose garden with his German shepherds, Boycott and Huelga – a lasting vision – Dedicated to his grandchildren and great grandchildren like Rex, who represent the future and his legacy…

Guest Voz: Which way Florida Latinos swing in November depends on which candidate is the most economically fair
Comment
Halloween’s Sibling, Día De Los Muertos, a popular celebration not only by Latino Millennials