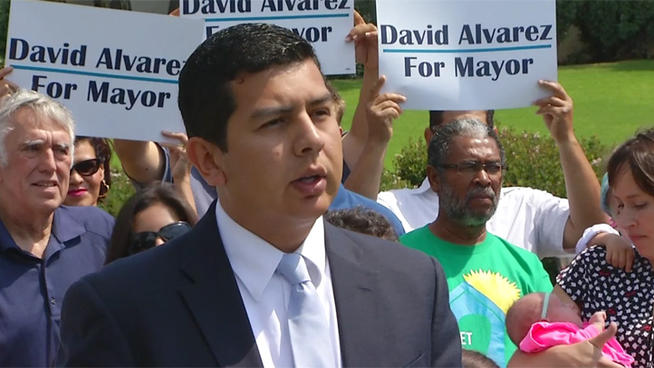 If you ask him, Juan Ortiz would tell you that he rarely votes in local elections.

But now that that two of the candidates in the City of San Diego special mayoral election are Latinos, he said he’s definitely going to the polls on November 19.

“We have to represent, you know?” said Ortiz near Chicano Park this week, in the heart of Barrio Logan. “It’s always other people deciding for us. It’s time to raise our voice and let them know that we’re here, and that we are valued. Ya estoy cansado de que nos pisoteen, I’m tired of being stepped on.”

Of the four major candidates in the race, two are of Mexican origin, Councilmember David Alvarez, and lawyer Mike Aguirre. Both are democrats. The other two candidates are Democrat Nathan Fletcher, and Republican Kevin Faulconer.

La Prensa San Diego went to two areas in the city with heavy Latino population, San Ysidro and Logan Heights, to ask people in the streets who will they vote for mayor and why. Not surprisingly, of the 15 people asked, 8 of them said they will vote for one of the Latino candidates: seven of them favor Alvarez while one favors Aguirre.

Ortiz, the unemployed construction worker quoted at the beginning of this article, said he will vote for Alvarez, because “he’s one of us. He’s from here, from Barrio Logan. He knows our problems and it seems like he wants to help us get better.”

Luisa Castro, a San Ysidro resident, said she also plans to vote for Alvarez. For Castro, it doesn’t matter if a candidate is Latino or not, but…

Video: Award-winning artist explains how to bypass success to hold on to creativity
Comment
Archaeologists find dozens of dog skeletons in Lima, Peru