Anastasio Hernández; A year without justice

By Mariana Martínez
La Prensa San Diego
SAN DIEGO — A year has passed since that night on May 28th 2010, when about twenty federal agents beat and tasered an undocumented immigrant, Anastasio Hernández, as he was being deported to Tijuana.

The beating and tasing left him brain dead; he was declared dead at a San Diego Hospital a few days later. 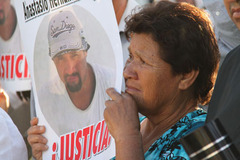 On the anniversary of this violent incident, family members, activists and the border community held a small vigil asking for justice and for the federal officials responsible for this death to be brought to trial.

Luz Rojas, Anastasio´s mother on the anniversary of this violent incident.
“You can see there where many, many agents who had a clear understanding of what they were doing” said Anastasio`s cousin, Veronica Hernandez at the protest, “the government is covering up their actions and refuses to tell us what happened.”

The federal government has yet to inform the family of the investigation and has not released the names of the agents involved. None of them has been put on leave or removed from their job.

What makes the family angry is the existence of a video that was released on You Tube, and many witnesses that have come forward to tell their account, yet, the authorities have not named suspects.

“Authorities told us it is legal for them to act that way because it’s their job” said Luz Rojas, Anastasio´s mother, “but they should not have permission to commit murder.

“All I want is for the law to apply to them. I know that will not bring my son back to life but at least I will know they will stop abusing their power and killing people” said Rojas.

According to activist Pedro Rios, from American Friends Committee, since Anastasio´s death, there have been at least seven other incidents in the border region that have ended with an immigrants death.

“None of the documented cases have ended with someone being held responsible” he added.

Such is the case of Guillermo Rodríguez Martínez, an immigrant shot to death by the Border Patrol in 2005. The case was quickly dismissed because the officer claimed Rodriguez was an immigrant smuggler and was about to hit the officer a rock.

Forensic evidence showed Rodriguez was shot in the back.

“We don’t want this to become a routine in our border communities” said Rios.

But in fact, this kind of questionable behavior has become more and more common, not only amongst federal agents but also by local San Diego police officers.

It was at a recent soccer game with Mexico´s national team, when a Hispanic man was beaten at Qualcomm stadium.

As in the case of Anastasio, somebody filmed the incident and quickly disseminated it on social media networks and then in news casts across Mexico and the US creating an outpour of critics against the officer’s actions.

Previous Post In Texas, the battle for quality education for ALL children rages on
Next PostBolivia: Improving the Race

In Texas, the battle for quality education for ALL children rages on
Comment
Bolivia: Improving the Race