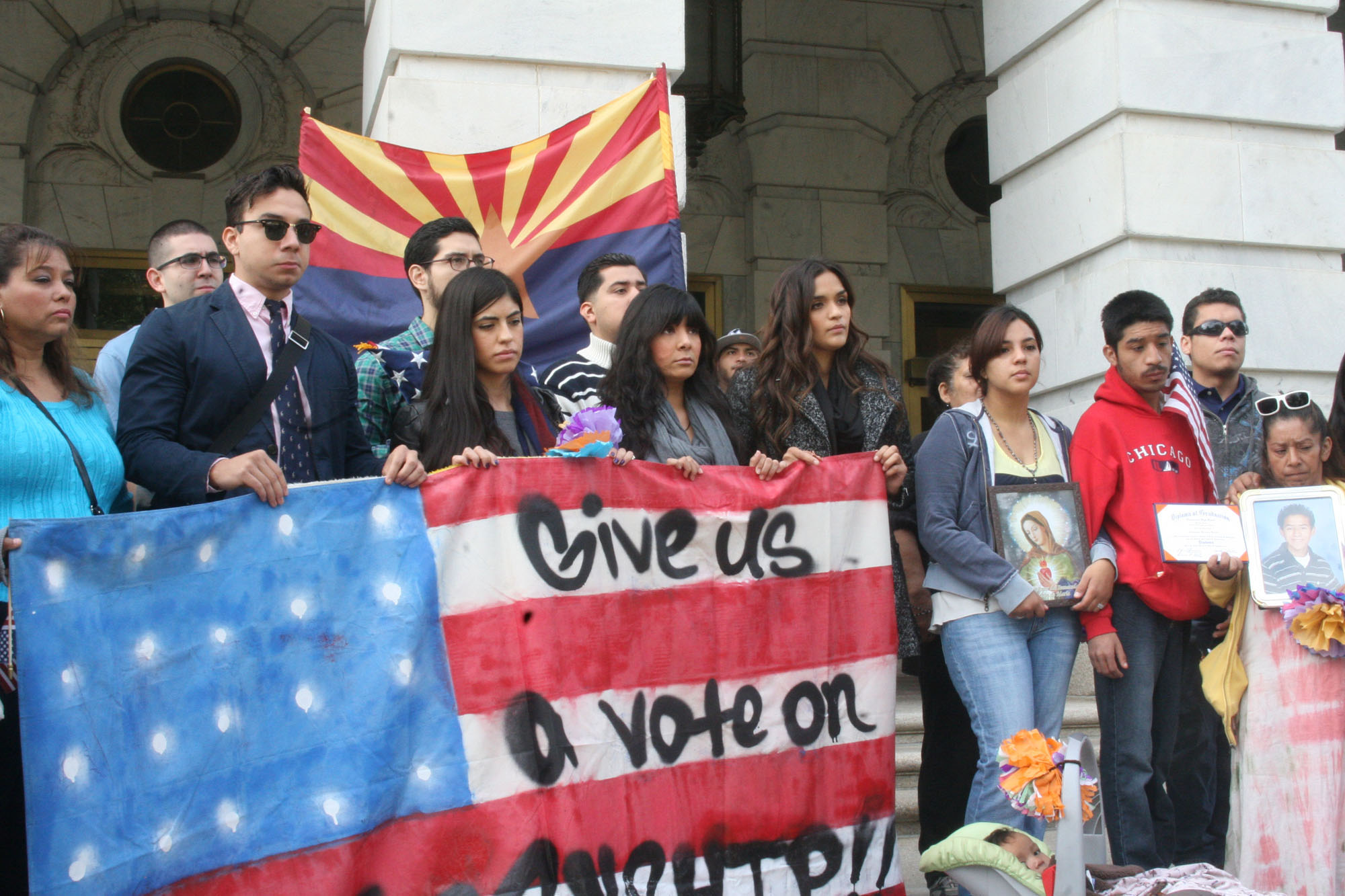 WASHINGTON – They rode for 43 hours in a bus from Phoenix, hoping to appeal to House Speaker John Boehner on immigration reform, but when they arrived at his office in Washington they were turned away.

So the group of 44 Arizonans gathered in the hallway outside Boehner’s district office Tuesday, singing and praying and vowing to wait – for a week or for a meeting with the speaker, whichever comes first.

“We are interested in any minute or moment of the day he has for us, even that’s five minutes, we would accept any time at all,” said Ian Danley, youth programs director of the Phoenix-based Neighborhood Ministries.

“We will wait until that happens,” said Danley, who led the group Tuesday.

The group left Phoenix on Saturday and arrived in Washington on Monday, with “moms, dads, children, and a lot of people of faith, DREAMers and students,” said Reyna Montoya, one of the advocates. She said they came to ask Boehner “to give a vote on immigration reform.”

The Senate in June passed a comprehensive immigration reform bill that includes new language on visas, tough new border security requirements as well as a potential pathway to citizenship for the estimated 11 million immigrants who are in this country illegally.

But that bill has stalled in the House, where Boehner has said he will not be rushed into considering the sweeping comprehensive Senate bill. Instead of putting the Senate bill on the floor, the House has instead considered a number of smaller measures, each of which includes part of the larger Senate package.

House Democrats earlier this month tried to force the issue, introducing their own 1,100-page comprehensive immigration bill that mirrors the Senate measure – minus the tough border-security language. But that bill has yet to have a hearing, and a spokesman for Boehner said Tuesday that the speaker’s position has not changed.

“The speaker remains committed to a step-by-step process to fix our broken immigration system,” said Michael Steel, the spokesman.

The Arizona group had hoped to urge Boehner to allow a vote on any of the bills that included a pathway to citizenship. But they were greeted at his office Tuesday by an aide who offered to deliver their concerns, but who said the speaker’s schedule was full for the day and the office too small to accommodate the group.

So the group prayed for about 20 minutes for Boehner to protect their families from deportation, before starting to sing and sway in the hallway. U.S. Capitol Police told them to keep it down and to stand along the side of the hallway, then watched as the group did just that.

“We are coming with a lot of hope, with a lot of faith, we want him (Boehner) to know these families can’t wait any longer,” Montoya said. “We believe he as a man of God, as a Catholic, he can do the right thing for the nation.”

Montoya called the trip a grass-roots effort, funded with $5 and $10 donations from friends and family and fueled with burritos made for the bus ride by their mothers. The group plans to sleep on the floor of St. Stephen’s Episcopal Church while in Washington.

Among the advocates was Jesus Magana, an Air Force veteran who said the “same country that I served and risked my life for is the country that is tearing my family apart” – his sister is in the midst of deportation proceedings.

“I really love the military, I love my country,” said Magana, who planned to serve “until they kick me out.”

“But I found a bigger fight back home,” he said of his family’s situation.

“There is a lot of people who would like to speak to Speaker Boehner, and tell their story,” Magana said Tuesday. “Even if it’s 30 seconds, we would take that.”
But when Danley tried Boehner’s office door, he found it locked.

“Nobody is letting us in,” he said.

That did not deter members of the group like Montoya, who graduated last year from Arizona State University and said her father is now in deportation proceedings.

Senate immigration bill:
– S744: A comprehensive measure dealing with border security, worker visas, a pathway to citizenship and other measures.

House immigration bills:
– The Strengthen and Fortify Enforcement (SAFE) Act: Allows local law enforcement to enforce immigration laws.
– The Legal Workforce Act: Requires employers to use the E-verify system when hiring.
– The Agricultural Guestworker Act: Establishes a temporary guestworker program for agriculture workers.
– SKILLS Visa Act: Creates an immigration path for workers in science and engineering fields.
– HR 15: Introduced this month by House Democrats, it mimics the Senate bill but strips out the tough border-security measures in that bill.

(FEATURED PHOTO: After two days on a bus to get to Washington, a group of 44 immigration reform advocates from Arizona gathered outside the Longworth House Office Building before trying, unsuccessfully, to get a hearing with House Speaker John Boehner. Cronkite News Service photo by Pei Li)