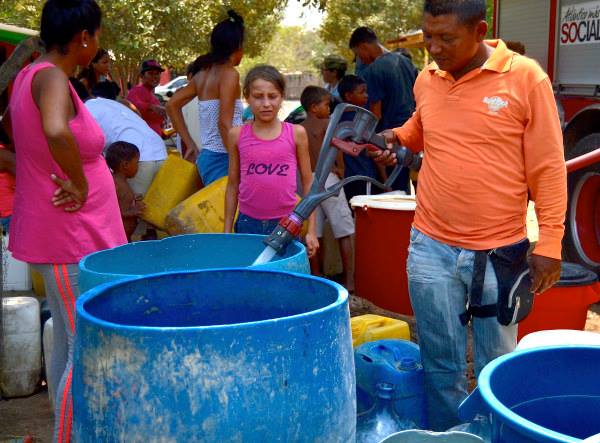 To celebrate World Water Day, the Planet Water Foundation is building 24 water-filtration systems in 24 rural communities in just 24 hours. The systems, called AquaTowers, will provide long-term access to clean drinking water and sanitation stations for an estimated 24,000 people in India, Indonesia, Cambodia, Colombia and the Philippines.

The initiative, called Project 24, is to raise awareness of the need for sanitary systems and clean water around the world. The event began at midnight (on March 22) and the last tower installed by 11:45 p.m. EST (8:45 p.m. Arizona time).

“This is an opportunity for these communities to develop well beyond where they are,” Mark Cain, chief marketing officer for the Planet Water Foundation, said. “It’s time. They’ve waited long enough.

“We think of all the advancements that we have in the United States or more developed countries, and we take so many of these things for granted,” Cain said. “We’re trying to advance these communities, and water seems to be one of the most important things.”

Five teams, each made up of about 10 volunteers from Planet Water and partner sponsor organizations, will install the towers and provide hygiene education and training in each community. Many of the towers will be installed in schools, where younger children receive training on how and when to wash their hands, brush their teeth and other basic hygiene habits.

The foundation has partnered with 24 organizations, each of which are sponsoring a tower. Xylem, a global water technology company, previously has worked closely with the Planet Water foundation and sent volunteers to help build towers at every site.

“Everyone knows about Earth Day, but not everyone knows what World Water Day is,” Michael Fields, the director of corporate citizenship at Xylem’s Watermark program, said. “This is an effort on our part to help Planet Water get the word out while at the same time impacting a great number of people all at once.”

Fields said that the AquaTowers are a sustainable solution to a problem that affects everyone in the world.

“Water is a resource that everyone uses, and it’s a resource that has an expiration date,” Fields said. “We will run out of clean water, so if people are aware of what they can do in their communities, that’s the goal. Everyone has a part in doing it.”

A mission to stop disease

Unsafe drinking water is linked to multiple health complications including cholera, diarrhea, dysentery, hepatitis A, typhoid and polio, the World Health Organization says on its website. According to the organization, nearly 4,000 children die every day from water-related illnesses. The Planet Water Foundation believes that the transmission of these diseases through unclean water can be prevented and they are on a mission to stop it.
“The need is great,” Cain said. “There isn’t one organization that can solve the world’s water crisis, but we’re trying to do our part.”

“We’re trying to help break that endless cycle of generational hopelessness,” he said. “If you’re sick, it’s difficult to make it out of bed to go to school. If parents are ill because they’re drinking bad water, it’s hard to take care of their children or go to work.”

According to a 2014 Planet Water impact report, children at schools who participated in Planet Water’s water and hygiene educational programs had significantly higher grades than those who did not go through the program. Over the course of the yearlong study there was an 80 percent decrease in diarrheal episodes among children from schools that received training from Planet Water, according to the study’s findings.

The AquaTowers require little maintenance and they can filter water from any source nearby. Each tower produces about 10,000 liters of clean water per day, enough to sustain a community of up to 1,000 people.

The infrastructure in small rural communities is extremely limited, Cain said, with spare parts difficult to come by. Planet Water provides spare parts as well as training on how to operate the systems.

“Our commitment only starts in these communities when we install the filtration system,” Cain said.

The foundation performs a quarterly inspection on every tower, ensuring that each one functions properly and performing any necessary repairs or replacements. They also train people in the community to maintain the system.

“It’s amazing to see how people will adopt those AquaTowers,” Cain said. “They are a sense of pride, for one, but they are also their only source of clean water. They want to make sure that they work, because they see the effects once they are able to drink it.”

The Planet Water Foundation has installed about 700 towers in 12 countries since 2009, helping about 700,000 people gain sustainable access to safe drinking water.

“When someone sees crystal clear water for the very first time, their eyes light up,” Cain said. “It’s a magical moment. Every time they’ve looked at a glass of water or a bottle of water, it’s always dirty. We turn on our faucets here and just assume that it’s perfect.”

World Water Day is an effort to increase awareness of a global issue, and Planet Water is just one organization trying to spread the word. People can contribute to the cause by supporting efforts like Project 24, or by simply conserving water at home.

“As long as you’re aware of what’s going with water in your community and looking at the challenges that others are having in developing countries, that’s important,” Fields said. “That’s the goal of World Water Day, to raise attention and bring people closer to what’s really going on with water, whether it’s at your own home or in Cambodia.”