Kahlo’s exhibit consists of over 100 painted portraits of girls and young women, as young as 7 years old, who died in Juárez, Mexico. Kahlo states part of the reason she created this exhibit is because she wanted more people to know about the atrocities occurring in Mexico and other parts of Latin America.

“If we look back in history all the people that get painted are the rich. I wanted to do an exhibit on the poor, the ones that people don’t usually talk about,” said Kahlo who is a single mom and “can relate to the parents of the missing girls.” 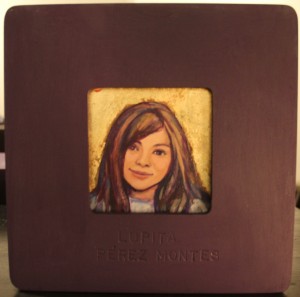 “They sent me 12 of the photos,” said Kahlo. “My fantasy would be to donate all of these portraits to Casa Amiga for the families of the missing girls.”

Kahlo made each frame and stamped each girl’s name and painted them with a purple hue. If she could not find a photo of a victim, the girl was then represented with a tiny figurine like the “Virgen de Guadalupe,” a small bird or a heart.

Since 1993, over 1,000 young women have disappeared in Juárez, Mexico. Of those missing, more than 700 bodies have been found tortured, dismembered and sexually violated and discarded in shallow graves in desert sites that have now come to be known as “the Labyrinth of Silence.”

Many women work in assembly plants called “maquiladoras.” They live in small, disadvantaged towns in the outskirts of the city and disappeared while traveling to and from work, where they have to travel in unsafe conditions, usually without streetlights and supervision.

Little is known about the perpetrators or their motives but many experts speculate that it has a lot to do with Mexico’s dysfunctional justice system and high level of impunity, as well as the lack of employment opportunities for men, which have altered traditional gender dynamics and created a conflict between the sexes.

“It’s right on our border and yet it’s not known about … people in Chicago know about it because of a beautiful exhibit at the National Museum of Mexican Art two years ago. Latinas know about it but the general population doesn’t know that right across the border there are hundreds and thousands of young women that [have gone] missing and their violated bodies are found and I think that really touched me,” said Kahlo.

Aside from the numerous portraits, there is…

art exhibit, Chicago, featured, Juarez, missing women
Previous Post Guest Voz: Culture: The good, the bad and the feo — How do we change it?
Next PostVolunteering for a cause gets the New Year off to a fulfilling start

Guest Voz: Culture: The good, the bad and the feo — How do we change it?
Comment
Volunteering for a cause gets the New Year off to a fulfilling start