WAIANAE,Hawaii – Stevina (Chan) Kiyabu owns Coquito’s Latin Cuisine Restaurant. She’s a product of a Hong Kong Chinese father and a Cali, Colombian mother, but her story is even more global.

She was born on the Caribbean island of St. Martin. “My father did a lot of business in the Caribbean and fell in love with Puerto Rico. When I was about a year old, he moved the family there. So as far back as I can remember, I always lived in Rio Piedras,” she said.

Kiyabu continued: “I went to elementary in Hato Rey, and then when Papi bought us a house, I attended high school
in Guaynabo. When I graduated, I was interested in culinary arts training. The University of Puerto Rico – Rio Piedras didn’t have a degree program but had a certificate program, so I enrolled there. Then when the Colegio Universario Del Este, in Carolina, Puerto Rico, offered a culinary arts degree program, I transferred there.” 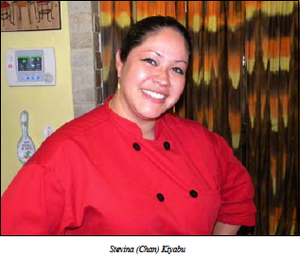 She went on: “I had an instructor at the Colegio Universario that – after working with me — suggested I consider leaving Puerto Rico and furthering my education at the Culinary Institute of America (CIA) in Hyde Park, New York.

Based on his advice, I thought ‘Sure, why not?’ and left the island for my CIA adventure.

(Editor’s Note: Craig Claiborne, celebrated author and food critic, New York Times, said: “Almost every profession
has an outstanding training ground. The military has West Point, music has Juilliard, and the culinary arts has The Institute.”)

“I attended the Institute for three years and earned a degree in Baking and Pastry,” she said. “Based on the Institute’s reputation, restaurant owners and GMs from around the nation go there with job offers for its graduates.
I was the only Puerto Rican Latina in the graduating class and had a portfolio with examples of the work I’d done in the three years.

I was offered a pastry chef position at the Boca Raton Resort & Club in Boca Raton, Florida. And I thought: ‘Sure,
why not?’”

And so the globetrotting young lady packed her bags and headed to one of Florida’s premier resorts. She said: “The Boca Raton Resort & Club is a huge complex. As a pastry chef, I was in charge of making pastries for five of the Resort’s restaurants and eateries. I learned how to design menus and how to work with seasonal products so our pastries were always fresh.”

She added: “There weren’t many Puerto Ricans in Boca Raton at that time. The primary Latino groups were the Cubans and Dominicans, but we all spoke Spanish, so I developed many friendships with members of both groups. I was also fortunate to learn a lot of their dishes and cooking techniques firsthand.

The two years I spent at the Resort provided some excellent Caribbean cuisine eating opportunities — and the best food was in the kitchen! LOL!”

Kiyabu said: “I always like trying different things and the Resort position was becoming routine. Then I got a call from a CIA classmate. He said the owners of the Ruby Tuesday chain were looking for a pastry chef at their headquarters in Maryville, Tennessee, and were interested in speaking with me. The ‘job interview’ consisted of me giving a demonstration of what I could do. Fortunately, they liked the demo and offered me a job in their Ruby
Tuesday Lodge. And I thought: ‘Sure, why not?’”

While at the Lodge, as part of a community service, she was often asked to serve as a consultant for area restaurants. She helped open various restaurants and patisseries. She helped them with their: menu design; inventory
management; payroll issues, etc. For three years, through that consultancy, she was able to get an insider’s view of many different types of food establishments in Tennessee.

She then opened her own restaurant in Knoxville and named it “Lucia.” She explained: “Though I had studied English in school in Puerto Rico, when I first arrived at the CIA I spoke very little. I could say a few basic words, but that was it. An Italian neighbor named Lucia took me under her wing. She taught me how to cook Italian food from scratch and also helped me learn English. That’s why I named the restaurant after her.”

While the restaurant was successful, she was getting antsy again. Then her sister Emily called. She said she’d
married a soldier who was deploying for a year and asked if Kiyabu would come live in Hawaii to keep her company while he was away. Kiyabu thought: “Sure, why not?”

Since she’s been in Hawaii, she met her husband, had a beautiful baby girl and opened Coquito’s this past February.
When asked about the restaurant, she says: “I love to cook and love it when people enjoy my food. My idea for a restaurant was to have a place where people would feel like they came to eat in my home. And I think we’ve accomplished that goal.”

Having eaten there quite a few times, our staff agrees.

What is on the horizon for this adventurous young lady? In July, she featured a Colombian dinner on Colombian Independence Day. The second weekend this month, she featured Dominican food. I’m sure we’ll see many other Latin food offerings in the future.

Who knows? Perhaps another Coquito’s on a different part of the island?

What we know for sure is that she’s always thinking of something new and always ready to say: “Sure, why not?”

Intrn'l Video: Documentary filmmaker pays homage to "uniquely Mexican sound"
Comment
Guest Voz: The distortion of truth by either political party is a crime against democracy